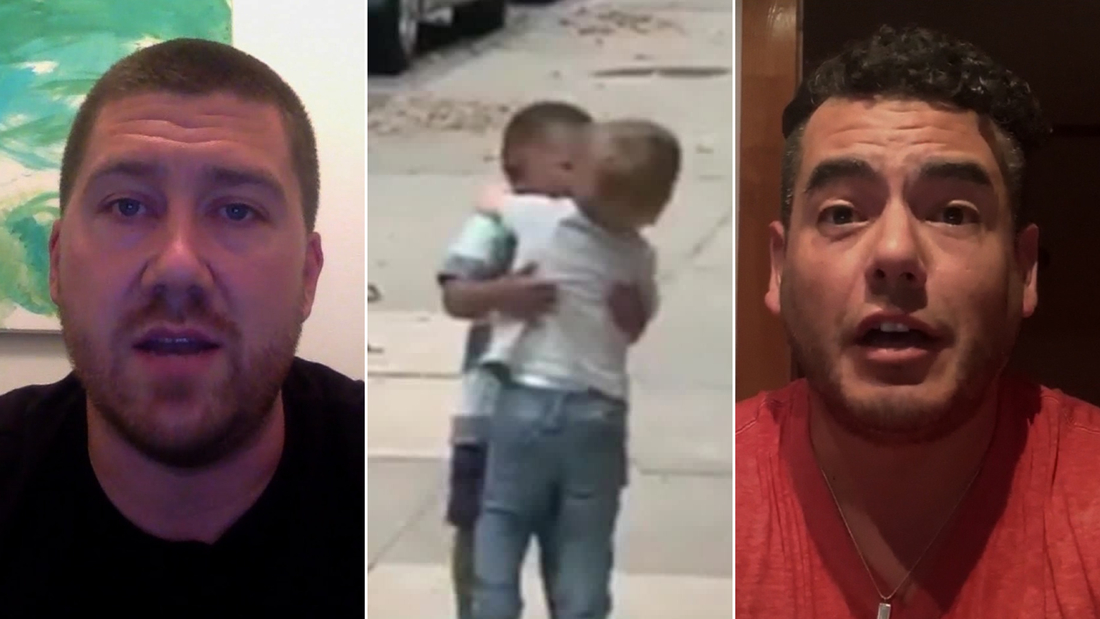 The fathers of the two toddlers who were shown in a manipulated video tweeted by President Trump speak out about the crude and misleading edit that has since been removed from Twitter and Facebook.

So it's come to this. In a presidency debased by extraordinary and ongoing assaults on truth and the First Amendment, Donald Trump is now exploiting and defaming toddlers, to further his political goals and war on the media.

Thursday, on the eve of Juneteenth, Trump tweeted and posted on Facebook a sloppily manipulated video based on a much-loved viral clip of a pair of 2-year-old best friends running and joyfully hugging on a sidewalk.

Trump's new version of the 2019 video featured fake (and misspelled) chyrons, supposedly from CNN, that read "TERRIFIED TODLER RUNS FROM RACIST BABY" and "RACIST BABY PROBABLY A TRUMP VOTER," as one of the toddlers, who is Black, runs ahead of his friend, who is White, while ominous background music plays.

The implication is that CNN had misleadingly recast a sweet encounter between two little boys through the prism of our national reckoning over racism and inequality. The patently fake video came from a pro-Trump, meme-generating Twitter account whose owner later gloated that "Todler" was trending on Twitter. Trump's son, Eric, also posted the manipulated video, which has been seen more than 20 million times.

The real video could not have conveyed a more fundamentally different message from Trump's post. It showed the two children toddling toward each other on a New York sidewalk as quickly as they could, hugging excitedly, then running down the street together. The father who first uploaded the video to Facebook wrote that the clip of the two "BESTIES" was "just so beautiful," and that he wished that "we could all be like this."

Facebook took down Trump's post after a complaint from a representative of the father that it violated copyright law. Twitter first labeled the video "manipulated" and marked it with a blue exclamation point, under a policy that prohibits "deceptively shar[ing] synthetic or manipulated media that are likely to cause harm."

It later disabled the video based on a copyright claim, after Trump's Tweet was liked 459,000 times.

CNN, the ostensible target of the President's video smear, can fend for itself. It issued a statement that "CNN did cover this story — but exactly as it happened." But what about the children, whose legal rights were plainly violated — by the President of the United States himself?

New York has a right of privacy law that protects what is known as the right of publicity — the right to protect one's own image and identity from exploitation by someone else. Sections 50 and 51 of New York's Civil Rights law prohibit exactly what President Trump did — the unauthorized use of a "name, portrait or picture of any living person" for "advertising purposes, or for the purpose of trade." A successful plaintiff is entitled to both an injunction to stop the violation and to money damages — including punitive damages if it is shown that the defendant "knowingly used such person's name, portrait, picture or voice."

As New York's highest court explained in 1952, the right of privacy statute was "born of the need to protect the individual from selfish, commercial exploitation of his personality." Trump's misconduct falls well within the contours of this law. He used footage of these children without consent to raise money for his presidential campaign. What he did was plainly an effort at political advertising and fundraising: tweeting what looked like a Trump campaign ad playing off two of the campaign's favorite tropes — that opposing racism is misguided, silly political correctness and that the media is evil and duplicitous.

Needless to say, this tweet was not part of the President's official duties; "presidential immunity" won't fly here.

Trump posted the video knowing it was manipulated. New York courts have ruled that such "knowing fictionalization" negates First Amendment protections that might otherwise protect the use of a person's image in connection with speech. (According to his press secretary, the video was only meant to be "satirical" and "funny.")

The situation is somehow both absurd and mind-bogglingly offensive. Trump, who files defamation lawsuits targeting freedom of speech and of the press with impunity and wants to "open up the libel laws" to make it easier to sue, has now maliciously defamed a young boy by falsely suggesting he is a tiny racist.

Just when you think that the despicable disinformation war being waged by President Trump and his campaign on the press and the American people can't get any lower, it somehow has.

It would be poetic justice for Trump to get sued over this repulsive stunt. Those little boys have a very strong case, even though they may not know it yet.

Hi: 79° Lo: 47°
Feels Like: 77°
More Weather
We had beautiful weather around northern California on Friday with sunshine and more warmth. Saturday will also be fantastic, so get out and enjoy it! A welcome change to our very dry weather pattern is coming soon.