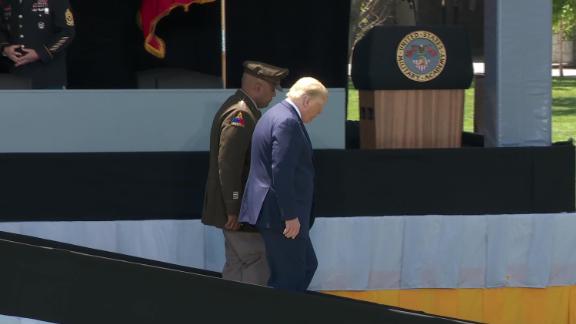 Donald Trump is not coping well.

As he turned 74 last weekend, the oldest man ever to assume the presidency got all defensive about how he looked walking down a ramp at West Point. In truth, his slow-mo shuffle didn't reveal anything that should embarrass a senior citizen. What was truly troubling was what Trump revealed the next day, when he shouted on Twitter: "THE SILENT MAJORITY IS STRONGER THAN EVER!!!"

The tweet harked back to Richard Nixon, who was president when the term "silent majority" was first used in 1969. It revealed how even in these troubled times, with the pandemic death toll passing 115,000 and citizens crying out for an end to police violence against minorities, the President is stuck in the past, out of step with a country that has changed practically overnight.

Some of the change is evident in the streets, where citizens of every race, religion, ethnicity and age group have joined a nationwide protest movement that recognizes police violence against African Americans and insists that Black Lives Matter. More proof of a changed society can be found in a recent Gallup poll that found four-in-10 support some aspects of socialism. Trump even seems to be losing the support of high-ranking military leaders as he refuses to consider renaming bases named for Confederate officers who waged war against the United States.

Trump is so incapable of adapting to change that he's been lapped by NASCAR: It recently banned the Confederate flag, which has long been waved by fans at its tracks. Even the National Football League, which engaged in a long row with players who knelt to protest racial injustice as the National Anthem was played, has reversed field.

Locked in his increasingly isolated social and political views, Trump sticks to his old tricks, like calling on the "silent majority" because he's apparently incapable of seeing modern America. For those who don't remember, or never learned about the term's origin, the "silent majority" was first invoked by President Nixon to argue that most Americans supported the war in Vietnam. In fact, polls done at the time showed that most believed the country's involvement in Vietnam had been a mistake.

Similarly wrong was Nixon's claim that his "majority" was silent. Pro-war Americans argued their side of things in political debates and kitchen-table discussions. They paraded and rallied, and a few would join in an organized attack -- the Hard Hat Riot of 1970 -- on anti-war activists.

If the phrase "silent majority" was so inaccurate, what about it would appeal to Trump? Well, it's not that he was all for America's war effort. As Trump told interviewer Piers Morgan he "was never a fan" of the war. It's more likely that, as a marketing expert, the reality TV host who made "You're fired!" his catch phrase loves the way that Nixon's two-word term communicated so much to his political base. Nixon's silent majority was, everyone knew, middle class, middle-aged, Christian, white and conservative, and they supported him.

As Trump leans on the term he reveals himself to be not only nostalgic, which is always a hazard for the aging, but a victim of another common problem among older folks: inflexibility. To be clear, this problem can afflict people of all ages, and it's also true that many seniors possess nimble minds. However, Trump has long shown he is rigidly attached to a bygone era, and has demonstrated an inability to recognize change and adapt to it.

Take, for example, the political injury he suffered when he scheduled a rally for Tulsa, Oklahoma, on June 19. As much of America knows, the date marks the annual Juneteenth celebration of African Americans' emancipation. (The name derives from the day when Union forces notified slaves in Texas that they were free.) Long recognized in black communities, the celebration of Juneteenth has gained popularity in most corners of the nation. Last year the Republican National Committee marked the day with a proclamation.

Trump's Senate ally Tim Scott has said the President didn't understand the significance of Juneteenth (he changed the date of the rally when people pointed it out). This is a sign of a man living in an isolated past. So, too, is Trump's selection of Tulsa for his campaign rally. Tulsa is the site of what has been called the worst racial massacre in US history. White mobs burned more than 1,000 black homes and businesses. Deaths were estimated at between 100 and 300.

For Trump to pick Tulsa, especially when the country is in the middle of coast-to-coast protests over police violence against black Americans, reflects either a colossal lack of awareness or monstrous cruelty.

The way Trump acts and speaks often makes him look like a mean old man. Take his administration's decision to change the rules so health insurance companies can discriminate against transgender people.

Many larger insurers opposed the change, which was announced on Saturday. Two days later, the Supreme Court ruled that the Civil Rights Act of 1964 prohibits discrimination against gay and transgender people.

This Supreme Court is never on the leading edge of radical change, but even the justices seated on this court -- six of whom qualify for Medicare -- showed they understand America in a way that the president does not.

Our President's inflexible mind is on display every time he calls out for "law and order" in response to civil rights protests that are overwhelmingly peaceful and supported by great majorities of Americans. (Perhaps Trump's mind is stuck in the 60s.)

He did himself a similar disservice when during a recent press conference where he was questioned by female reporters he appeared to muse nostalgically about the days when women were meek and retiring.

Again, we must all recognize that Trump's rigidity says nothing about all older people. (Follow the 84-year-old Dalai Lama on Twitter and you'll see what I mean.) However, in the President's case the inability to adapt does seem to be the sign of a man who is not aging well. He appears even more defensive and reactionary than he was when he was elected.

And like an out-of-touch founder of a business he's no longer capable of running, he could do a whole lot of damage on his way out the door.

Hi: 61° Lo: 48°
Feels Like: 59°
More Weather
Light showers and gusty south winds are ahead for your Tuesday. We'll dry out and get warmer through the middle of this week. More showers are possible late Friday into Saturday, but we'll dry out just in time for Halloween on Sunday.