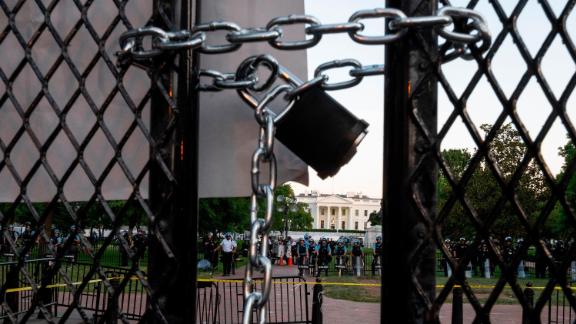 CNN's Don Lemon calls the White House a "fortress of fear," after workers constructed additional fencing along the complex amid protests over the death of George Floyd.

America, for all its flaws, has always been symbolized by a torch lighting a path toward equality and freedom in the world, even as it struggled to realize its own democratic ideals. The flame has always flickered, and it has always required tending. Millions around the world have recognized the aspirational significance of its democracy and the very real accomplishments of the American experiment.

That has granted America's voice a special resonance when calling out other countries' abuses. In nation after nation, oppressed people have looked to the United States for support. People seeking to safeguard the freedoms of their own nascent democracies have also counted on Washington to have their backs.

Now -- especially after this week -- the US looks like one of the last places that can speak credibly in defense of democratic rights elsewhere.

Is there any possibility that the United States can reclaim its moral standing to speak out for others?

The images of military police facing demonstrators, of park police confronting peaceful protesters by firing chemical gas into the crowds at Lafayette Park and the temporary movement of hundreds of active-duty members of the Army's 82nd Airborne Division to Washington DC this week all threaten to plunge a spear through the heart of America's democratic dignity.

On Tuesday, members of the DC National Guard, occupied the steps of the Lincoln Memorial. The soul-crushing sight threatened to destroy what's left of America's moral authority after more than three years of Donald Trump's presidency.

As always, the whole world is watching this country. But what do they see?

President Trump urged governors to "dominate" violent protesters on Monday, and said "the whole world was laughing" after a police precinct was set on fire in Minneapolis. Perhaps the regimes in Moscow, Tehran and Beijing quietly laughed. They seem to feel empowered whenever this country struggles. But the overwhelming international reaction was quite the opposite.

Look around. People across the world are not laughing. In at least a dozen of countries, thousands have taken to the streets, protesting the killing of George Floyd in solidarity with demonstrators in the US and protesting racism in their own countries. They risked their lives during a pandemic to express support for America's protestors. Some were driven by anti-American sentiment, but the overwhelming fuel was likely anger against racism, confirming that the ideals driving the demonstrations here -- America's founding ideals of equality -- do indeed hold a universal appeal. Many of the demonstrators chanting in other countries did so to support American protesters in defense of that founding principle. They don't want the torch to die out.

It is uniquely poignant that this American tragedy is unfolding this week on the anniversary of the 1989 Tiananmen Square massacre, when Chinese soldiers drove their tanks over peaceful demonstrators calling for democratic reforms. As many as 10,000 were killed there. In the Beijing rubble lay the iconic Goddess of Democracy, a white plaster statue handcrafted by the young demonstrators when their dreams still seemed within reach.

The figure -- which bore a resemblance to the Statue of Liberty -- was a concrete, palpable sign of the universality of the American ideal. When the regime's tanks destroyed it, we knew freedom would not soon come to the Chinese people.

On this anniversary, many inevitably drew parallels between Tiananmen and the police crackdown in Lafayette Square this week. The differences, to point out the obvious, are enormous. The United States is still a democracy, even though its democracy is under threat.

To be sure, Trump, who during a 1990 interview said the Tiananmen massacre showed "the power of strength" of China, is incapable of resisting his authoritarian instincts. He has taken advantage of the looting and vandalism that threatened to overshadow the legitimate grievances of demonstrators and used it to build his strongman credentials, portraying himself as the champion of law and order in what appears to be an attempt to gain political benefit.

In the process, he failed to listen to what protesters had to say, and he failed to offer solutions. To top it off, he violated the First Amendment of the Constitution, which guarantees, in addition to free speech and a free press, "the right of the people peaceably to assemble, and to petition the Government for a redress of grievances."

But America is much more than Trump, and the rest of the world is noticing that, too. The United States has not fully realized its ideals. That's why Americans of every description have taken to the streets to demand progress that has too long been denied; to demand that the country push to make a reality of the Declaration of Independence and its promise of equal rights for all its citizens. That's why the country's most respected former military leaders have been excoriating Trump's handling of the protests, and his divisive presidency.

The American people still have moral standing. They have earned the right to speak out, without fear of hypocrisy, in defense of democracy and freedom for people everywhere. They can speak for the future of Hong Kong, for the suffering of the Uyghurs, for freedom from repression in Iran, and on and on.

As for the American government, there is only one way it can regain its moral authority.

That's if the American people make an unequivocal statement this November, not just by defeating Trump at the polls, but by handing a decisive repudiation of his presidency, sending the message that his four years in office were an aberration, a painful detour in the country's march toward those democratic ideals that have inspired the world for more than 200 years. Anything else and that torch will be snuffed out.

Hi: 73° Lo: 45°
Feels Like: 75°
More Weather
Get out and enjoy this beautiful weather tonight! If you do head out and plan to stay out late, probably bring an extra later to throw on for when the sun sets as temperatures will be cooling off into the low to mid 60s for the valley by midnight and low to mid 40s by tomorrow morning.

Oroville man sentenced to 24 years for molestation of three children

La Nina just formed in the Pacific. Here's what it is

Nelson Fire has burned 1 acre near Richvale, powerlines down