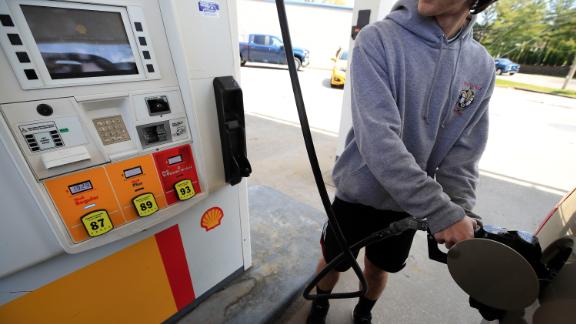 CNN's Pete Muntean took a road trip to see how travelers are dealing with the coronavirus pandemic during Memorial Day weekend.

The country has started a most unusual kind of Memorial Day weekend. Beach days, cookouts and park visits are underway, but with health officials pleading in the background:

Get some fresh air -- but watch how you do it.

After weeks of being holed up with stay-at-home orders because of the coronavirus pandemic, Americans in all 50 states have seen their restrictions loosened to varying degrees. As the country nears 100,000 recorded Covid-19 deaths, epidemiologists warn cases will spike as people increasingly get around.

But the White House's top coronavirus advisers also said people should feel free to venture outside with proper precautions. Many Americans are taking them up on it.

In coastal southern Georgia, beachgoers laid out on towels, sat under umbrellas and splashed in the Atlantic Ocean at Tybee Island on Saturday morning. They largely respected rules requiring groups stay 6 feet apart and have no more than 10 people.

"It's like letting the air out of a balloon right now," Tybee Island resident Don McLemore said about visitors. "Everybody's coming out, and they're anxious to get out."

"If it's my turn to go, I'm going. If not, I'm enjoying life," a maskless James Dixon told a CNN crew there.

Tybee Island Mayor Shirley Sessions conceded there were "a lot of people who do seem to be a bit complacent about the seriousness" of the virus.

"We just hope that everybody will be cautious and continue to space distance," she told CNN. "And if they are around people, to be cognizant of wearing a mask -- if not for themselves, for other people."

In Daytona Beach, Florida, beachgoers will be asked to stay at least 10 feet apart. Though the city says masks are advised, Mayor Derrick Henry conceded Friday that it's "not realistic or practical to ask people to go to the beach and wear a mask."

Some states -- New York, New Jersey, Connecticut and Delaware -- reopened beaches Friday just in time for the holiday weekend. Most beaches will be open in Florida while those in hard-hit areas such as Fort Lauderdale and Miami-Dade County will remain closed.

Rain will keep people inside in some parts of the country this weekend. But where beaches and other attractions are open, officials generally have issued social distancing restrictions and capacity limits.

White House coronavirus task force member Dr. Anthony Fauci, one of the nation's top infectious disease experts, told the public this week that going outside was fine, with cautious measures.

"Go out, wear a mask, stay 6 feet away from anyone so you can have the physical distancing," he told a CNN coronavirus town hall. "Go for a run. Go for a walk. Go fishing. As long as you're not in a crowd and you're not in a situation where you can physically transmit the virus."

More than 1.6 million people in the United States have tested positive for coronavirus, which has killed more than 96,000 nationwide, according to Johns Hopkins University.

Officers and mascots are patrolling beaches and attractions

In Florida's Orlando area, the Gatorland wildlife theme park reopened Saturday after weeks of closure. Among its many safety measures: A Sasquatch-looking mascot with a 6-foot wingspan -- the Social Distancing Skunk Ape -- will wander the grounds, encouraging guests to keep well apart.

The park will offer free masks to guests, and it has added 100 hand sanitizer stations, CEO Mark McHugh told CNN.

"We had hand sanitizers everywhere to begin with. You can't even turn around without running into one now," McHugh said.

In Texas on Friday, bars joined the list of businesses allowed to reopen, though with capacity limits.

In that state's capital, Austin, plenty of people were out getting drinks into early Saturday morning, Taylor Blount told CNN. Several images he posted to Twitter showed one street teaming with people in the night.

Other businesses may reopen as the weather warms up.

In Nevada, Gov. Steve Sisolak says he hopes to be able to allow casinos to reopen on June 4. Sisolak announced Friday that the state's Gaming Control Board will make a final decision in its next meeting Tuesday. Nevada casinos have been closed since March 17.

Gov. Andrew Cuomo signed an executive order Friday that permits "any nonessential gathering of 10 or fewer individuals ... provided that social distancing protocols and cleaning and disinfection protocols required by the Department of Health are adhered to."

Asked about the order Saturday and whether it would impact the state's ability to reopen further, Cuomo said, "Theoretically, it shouldn't," pointing out that gatherings of up to 10 is among guidelines provided by the US Centers for Disease Control and Prevention.

The governor stressed individual responsibility and said the impact of the order "depends on how people act." Ultimately, gatherings are a decision of risk vs. reward, he said. "You have to make that judgment."

On Friday, New York state lost 84 lives to Covid-19, the governor announced, a milestone he was personally looking toward. Cuomo said he'd previously spoken with a health care professional who told him to look for a number under 100, and at that point, the governor could breathe a sigh of relief.

"Eighty-four is still a tragedy, no doubt," he said. "But the fact that it's down as low as it is is really, overall, good news."

But even as states lift restrictions, the pandemic is not over.

That was apparent Saturday in Arkansas, where Gov. Asa Hutchinson said the state was experiencing a "second peak" in coronavirus cases. Arkansas was one of a handful of states that never issued a stay-at-home order as part of an effort to limit the spread of the virus.

"It's clear and evident to me that we have one peak, and then we've had a deep dip, and then we're having a second peak right now and they're really about 30 days apart," Hutchinson said.

The governor attributed the rise in cases in part to an expanded testing effort in the state.

Among those new cases were some that stemmed from a high school swimming party in northeast Arkansas, the governor said.

Hutchinson said he was sure everybody thought the party "was harmless," but "positive cases resulted from that."

"During this Memorial (Day) weekend, we want to be out and we want to enjoy ourselves, we want to remember this holiday and those that have served our country and given their lives in service of our country," he said. "But let's be safe and let's be disciplined at the same time."

Hutchinson declined to provide further details about the swim party.

The Navajo Nation, with one of the highest per-capita coronavirus infection rates in the United States, has entered another weekend lockdown.

The Native American territory spans parts of Arizona, New Mexico and Utah. During the lockdown, from Friday night to early Monday, residents are generally required to stay home, with exceptions for essential workers

"We're doing our best to flatten the curve, so let's think of the health and safety of others and stay home this weekend," Navajo Nation President Jonathan Nez said.

The first group, Apollo Holding, was offering "NoronaPak" products, including cannabidiol derived from the cannabis plant, according to the letters from the Food and Drug Administration and the Federal Trade Commission.

Apollo Holding claimed it can fight off coronavirus with NoronaPak, according to the letter. The products purported "to mitigate, prevent, treat, diagnose or cure Covid-19 in people," but were unapproved drugs sold in violation of federal law, the letters said.

The second letter was issued to North Coast Biologics, which was allegedly offering a vaccine.

In March, a person involved with North Coast Biologics bragged about the purported vaccine on Facebook, the letter said. "Just vaccinated 12 people in west Seattle tonight . . . 12 more to vaccinate in Burien," it said.

The group allegedly said it would make the vaccine available to those who are either at risk or for anyone who simply needs reassurance. It edited its social media post last month, saying it was no longer available because of a "cease and desist" letter from the Attorney General.

But the misleading claims remained online, federal officials said. Both groups did not immediately respond to CNN's request for comment.