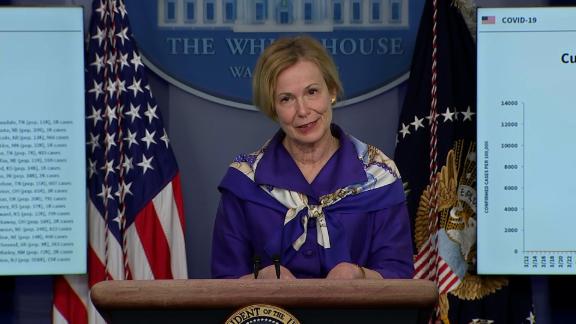 White House Coronavirus Task Force Coordinator Dr. Deborah Birx presents data about which US areas still have a high rate of positive tests for the coronavirus.

The first group, Apollo Holding, was offering "NoronaPak" products, including cannabidiol derived from the cannabis plant, according to the letters from the Food and Drug Administration and the Federal Trade Commission.

Apollo Holding claimed it can fight off coronavirus with NoronaPak, according to the letter. The products purported "to mitigate, prevent, treat, diagnose or cure Covid-19 in people," but were unapproved drugs sold in violation of federal law, the letters said.

The second letter was issued to North Coast Biologics, which was allegedly offering a vaccine.

In March, a person involved with North Coast Biologics bragged about the purported vaccine on Facebook, the letter said. "Just vaccinated 12 people in west Seattle tonight . . . 12 more to vaccinate in Burien," it said.

The group allegedly said it would make the vaccine available to those who are either at risk or for anyone who simply needs reassurance. It edited its social media post last month, saying it was no longer available due to a "cease and desist" letter from the Attorney General.

But the misleading claims remained online, federal officials said. Both groups did not immediately respond to CNN's request for comment.

Expect to see police at the beach in some places

After weeks spent holed up indoors to stop the spread of coronavirus, Americans will emerge from lockdowns to venture outdoors for Memorial Day.

There will be beach days, cookouts and park visits. And with the large gatherings, the risk for community spread outbreaks will be high, health officials warn.

"We'll be having people who want to get out there and get fresh air," Dr. Anthony Fauci said at a CNN coronavirus town hall. "You can do that. We're not telling people to just lock in unless you're in a situation where you have a major outbreak going on, we don't have too much of that right now in the country."

But that does not mean let your guard down as coronavirus spreads.

"Go out, wear a mask, stay six feet away from anyone so you have the physical distancing," he said. "Go for a run. Go for a walk. Go fishing. As long as you're not in a crowd and you're not in a situation where you can physically transmit the virus."

More than 1.6 million people in the United States have tested positive for coronavirus, which has killed over 96,000 nationwide, according to Johns Hopkins University.

All 50 states have now taken steps to ease stay-at-home restrictions.

In some states, that effort includes reopening beaches for the weekend, the unofficial start of summer. But officials have issued social distancing restrictions and capacity limits to keep beachgoers and communities safe due the threat of the coronavirus.

In New York, New Jersey, Connecticut and Delaware, beaches reopened Friday with certain restrictions. Most beaches will be open in Florida, while those in hard-hit areas such as Fort Lauderdale and Miami-Dade County will remain closed.

"Please, as you go out this weekend, understand you can go out, you can be outside, you can play golf, you can play tennis with marked balls, you can go to the beaches if you stay six feet apart," said Dr. Deborah Birx, the White House coronavirus response coordinator.

"But remember that that is your space, and that's a space that you need to protect and ensure that you're social distancing for others."

Paul Kanitra, the mayor of Point Pleasant Beach, New Jersey, said police will be on the beach this weekend to enforce social distancing by giving warnings or asking people to leave.

"Nobody wants to be the mayor from 'Jaws' who lets everyone back in the water a little too soon, right?" he said.

Beaches aren't the only thing that may reopen as the weather warms up.

In Nevada, Gov. Steve Sisolak says he hopes to be able to allow casinos to reopen on June 4. Sisolak announced Friday that the state's Gaming Control Board will make a final decision in its next meeting Tuesday. Nevada casinos have been closed since March 17.

In addition to social activities, churches and places of worship have also been a major point of contention. In Mississippi, a church was burned to the ground after it defied coronavirus restrictions.

President Donald Trump announced his administration would label houses of worship as "essential" to mandate their reopening.

"Some governors have deemed liquor stores and abortion clinics essential, but have left out churches and houses of worship," Trump said. "It's not right. So I'm correcting this injustice and calling houses of worship essential."

He called on governors to "allow churches and places of worship to open right now," and threatened to "override" governors if their states did not follow the recommendations — though he does not have the authority to do so. The recommendations are voluntary.

Religious institutions should provide soap and sanitizers, clean facilities daily and encourage worshipers to use cloth masks, according to guidance from the Centers for Disease Control and Prevention.

Georgia Gov. Brian Kemp tweeted his support for Trump, saying places of worship -- especially during these difficult times -- are essential.

California Gov. Gavin Newsom said he welcomes places of worship opening in a safe manner and he's been working with the faith community on guidelines. Rhode Island Gov. Gina Raimondo said her state is not ready to reopen worship centers.

In Vermont, Gov. Phil Scott said his state will open churches at 25% capacity. And in Virginia, Gov. Ralph Northam said churches will continue to hold outdoor or drive-through services.

"Just because we've allowed places of worship to open up, with those new guidelines, that doesn't mean that they have to," Northam said. "So if they're more comfortable continuing the practices that they've been using over the past few weeks, they can do that."