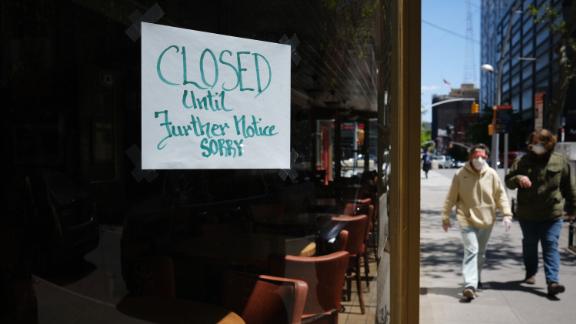 For the ninth week in a row, millions of Americans filed for initial unemployment benefits. Even as the economy is beginning to reopen in parts of the country, layoffs and furloughs have taken hold of the US labor market.

Another 2.4 million Americans filed for first-time benefits last week on a seasonally adjusted basis, the Department of Labor reported on Thursday. In total, 38.6 million people have filed for initial unemployment aid since mid-March, when lockdowns began in full force across the country. That corresponds to 23.7% of the March US labor force.

Stripping out the seasonal adjustments, which had accounted for a slight increase from the previous week, the number of claims stood at 2.2 million last week.

In normal times, the seasonal adjustments help smooth out the data and provide a clearer picture. But in a crisis such as this one, adjustments can distort what's really going on, said Heidi Shierholz, senior economist and director of policy at the Economic Policy Institute.

In a rare quirk, claims for the week before, which ended May 9, were revised down sharply -- from nearly 3 million to 2.7 million. That's welcome news, but it was expected because it was the result of a reporting error from Connecticut's Labor Department, which substantially overreported the number of that state's claims from the week prior.

Last week, Georgia overtook Kentucky as the state where the highest percentage of the March labor force -- 39.3% -- filed for initial jobless claims. In Kentucky, 38.5% of the work force has applied for initial unemployment aid.

Now for the (relatively) good news: First-time claims have declined for seven straight weeks. They peaked at 6.9 million in the final week of March.

Economists expect further declines in the coming weeks as states begin to reopen their economies. Still, the weekly claims are at historically highs. The four-week average now sits just above 3 million claims; in the years before the pandemic, the weekly unemployment numbers were around the 200,000 level.

The continued job losses suggest layoffs are no longer only happening just because of the economy shutdown -- but also because there is a more permanent re-allocation away from jobs that need lots of face-to-face interaction, said Deutsche Bank chief economist Torsten Sløk in a note to clients.

In addition to filing for regular unemployment insurance, the Department of Labor announced more than 2.2 million people in 35 states last week filed initial claims for the pandemic unemployment assistance program.

However, the Massachusetts Executive Office of Labor and Workforce Development later clarified that just under 116,000 residents submitted first-time claims for the pandemic program last week, not the nearly 1.2 million listed on the federal agency's press release. The problem was a state data entry error. This would reduce the number of Americans newly filing for the pandemic program nationwide to less than 1.2 million.

Congress created this program to provide benefits to independent contractors, the self employed, gig workers and certain people affected by the coronavirus. Nearly 1.9 million people filed first-time pandemic claims in the two weeks ending May 9.

Meanwhile, more than 6 million Americans in 27 states have filed continued jobless claims under the pandemic program in the week ending May 2, a spike of more than 2.7 million in seven days.

California had the highest number of residents who filed continued claims, at nearly 1.8 million, followed by Michigan with more than 1.2 million.

Joblessness is a crisis in the United States. Wide swaths of the country's labor market will remain closed as the coronavirus makes returning to work impossible for many Americans. Economists expect many -- but not all -- jobs will return as the economy reopens. But experts remain concerned that some jobs will be permanently eliminated by this crisis.

Continued jobless claims -- which count people filing for unemployment benefits for at least two weeks in a row -- rose to 25.1 million, up 2.5 million from the week before. This brings the seasonally adjusted insured unemployment rate to 17.2% for the week ended May 9.

Countless Americans have had trouble filing for jobless benefits since the pandemic began. State unemployment agencies were overwhelmed with the onslaught of new claims, but things have been improving.

Florida says it has paid 96% of eligible claims, up from a small fraction a month ago. And New York officials said Wednesday that only 7,580 of the applications filed prior to April 22 still need more information to be processed, while 20,800 claims are awaiting workers' certification before they can be paid. The state has paid nearly 1.2 million claimants who filed before that date.

While the latest national figures "indicate that there are still millions of individuals who have applied for unemployment benefits and are awaiting aid, there is finally evidence that help is being delivered on a larger scale," said Andrew Stettner, senior fellow at The Century Foundation.

Economists are paying more attention to how many people are claiming benefits longer-term to understand how the labor market is recovering as the economy is beginning to reopen. One big question is if this is the peak for continued claims, or whether they will keep climbing as the crisis leaves people out of work for weeks on end.

Last week was also the cut-off week for the survey on which the Bureau of Labor Statistics' monthly jobs report is based, "giving us a sense of how painful the next jobs report will be," said Nick Bunker, director of economic research at Indeed Hiring Lab. "Since the April jobs report was measured, 15.8 million claims have been filled."

Unemployment claims do not equal lost jobs. Those two numbers are based on different surveys.

The BLS's last jobs report showed some 20 million jobs got wiped out in April, while the unemployment rate jumped to 14.7%, its highest level since the agency began tracking it in 1948.

Update: This story has been updated to reflect Massachusetts' reporting error in the number of initial claims filed for the pandemic unemployment assistance program.