As states begin to reopen, some Americans say it's about time. Experts are not so sure. 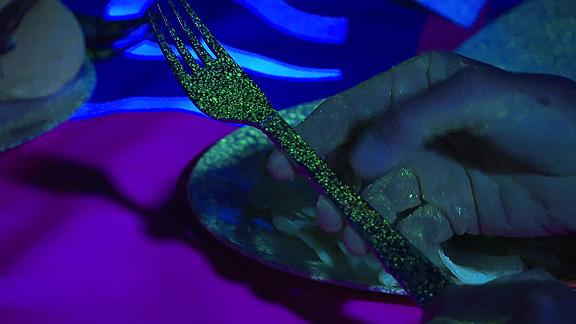 CNN's Randi Kaye takes a closer look at how quickly germs can spread in restaurants through a science experiment designed to track germ droplets.

At Archie Moore's Bar and Restaurant in Milford, Connecticut, it was a beautiful Wednesday, and the patio was a full as it could be.

But amid a deadly pandemic, full doesn't mean packed.

Tables at the restaurant were 6 feet apart. There were single-use paper menus. Arrows told patrons which way to go in. Everyone needed a mask -- and if you didn't have one, the restaurant would give you one.

These are the new rules, put in place by Connecticut officials as the state joined others across the US in beginning its gradual reopening.

People still aren't allowed to dine inside, but this first little freedom made some locals happy.

One man told CNN he felt this was long overdue.

"I understand the caution and everybody wants to be safe but sometimes some things are being taken to the extreme," he told CNN's Brynn Gingras. "And they just have to understand people (who are) trapped inside, they can't take it anymore. They've got to get back out."

Now, as states start to roll back restrictions put in place during stay-at-home orders, the question remains: When will people feel safe to go out, and what are the risks?

With only a handful of states showing significant improvement in infection rates, some experts caution it could be too soon.

As of Wednesday afternoon, at least 18 states had registered an upward trend in average daily cases -- a rise of at least 10% -- over the previous seven days, according to an analysis of Johns Hopkins University data.

Only 17 states' average daily cases dropped more than 10%, while the rest were level or near level, the data showed.

The US Centers for Disease Control and Prevention released 60 pages of detailed guidance Tuesday on how to reopen the country -- including road maps for schools, restaurants, transit and child care facilities. In the guidance, the center advised that the first phase of reopening should begin after a state has seen a downward trajectory in cases over 14 days.

The CDC posted its guidelines as news emerged that at least two states, Florida and Georgia, are under scrutiny for their public data on Covid-19 cases, and while Texas, Vermont and Virginia face questions after combining results from diagnostic and antibody tests, which could skew results.

More than 1.55 million people in the United States have tested positive for the virus and at least 93,406 have died, according to Johns Hopkins University.

"The only thing that was keeping this very contagious virus in check was each of us keeping that physical distance," former Baltimore Health Commissioner Dr. Leana Wen said Tuesday. "If we're going to let people go to work and reopen, we are going to be introducing risk of some kind. The key is what are the steps we can take to reduce that risk as much as possible?"

States have moved at different paces as governors balance reopening their economies with keeping residents safe. Some states, including Georgia and Texas, rolled out aggressive reopening plans, while others have taken a more measured approach.

Alaska's and Iowa's governors said their states are ready to reopen most businesses Friday.

In Alaska, that means all businesses, houses of worship, libraries, museums and sporting activities can resume at 8 a.m., Gov. Mike Dunleavy's office said. Alaska has the fewest cases of all 50 states, has reported only single-digit new cases since mid-April and boasted no new cases Monday.

Alaskans are still encouraged to take precautions, such as distancing and wearing masks in crowds, and visitation will remain limited to prisons and senior centers, the governor's office said.

Iowa Gov. Kim Reynolds intends to allow movie theaters, zoos, aquariums, museums and wedding venues reopen Friday, she said. Swimming pools will be allowed to open for laps and lessons as well. Bars can reopen May 28, and school-sponsored activities, such as sports, can resume June 1, she said.

Iowa tallied 212 new cases Tuesday, marking its third straight day of declining Covid-19 positives, according to state data. Its total cases have been on the decline for a week, the data shows.

Indiana, too, plans to move ahead with opening a large swath of its economy Friday, but with numerous restrictions, including: limiting social gatherings to 100 people, limiting dining rooms to 50% capacity and stores to 75% capacity, and omitting contact games, such as football and lacrosse, from the list of sports allowed to resume.

"We're still telling you to be overly cautious about surrounding yourself in an environment that could put you at risk," Gov. Eric Holcomb said.

New York, California and Pennsylvania are among states that are allowing locales reporting declines in new cases to reopen as other areas remain closed.

Many cities also remain under stay-at-home orders. In Baltimore, gatherings of more than 10 people are still prohibited and retail stores remain closed.

In New York City, officials report some positive indicators, though the number of people admitted to hospitals with suspected cases of Covid-19 ticked up slightly Monday, from 57 in a day to 63.

"It's a good day. We want to have great days, though," Mayor Bill de Blasio said, also sharing the positive news that the city had enough personal protection equipment to last through May and will begin working on building a surplus of PPE and ventilators.

Last month, the White House issued guidance to help states plan for reopening, but the measures were not mandatory and governors were left to make their own decisions.

Experts have warned that lifting restrictions prematurely may mean thousands more Americans will die in a second spike in cases.

The responsibility lies with individuals to adhere to guidelines, practice safe social distancing and adopt habits to keep themselves and loved ones safe.

Almost two-thirds of a record number of new case reports in the past 24 hours came from just four countries, including the United States, the World Health Organization said Wednesday.

Tedros Adhanom-Ghebreyesus, director-general of the WHO, said there were 106,000 cases reported in 24 hours, the most in one day since the pandemic began last year.

"We still have a long way to go in this pandemic," Tedros said.

Brazil, India, Russia, and the United States had two-thirds of the new cases reported, WHO infectious disease epidemiologist Maria Van Kerkhove wrote in an email to CNN.

Because there are delays in reporting, the number does not mean 106,000 people were infected, tested or counted in the past 24 hours, but that the results were compiled by the WHO in that time.