New York hit hard but other states are suffering, too 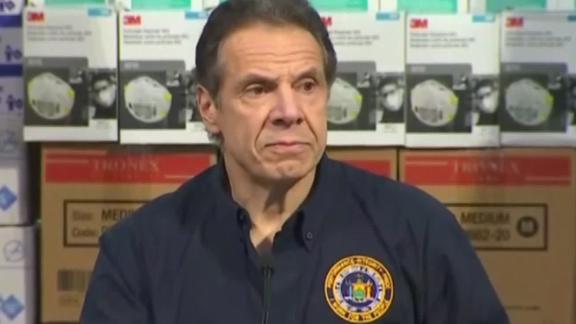 Gov. Andrew Cuomo (D-NY) says that New York needs ventilators so desperately that they will test splitting a ventilator between Covid-19 patients. Cuomo then chastises the federal government for not doing more to get ventilators to New York.

With more than 25,000 positive tests and 210 deaths, New York has become the epicenter of coronavirus cases in the United States, but in recent days, the numbers in Louisiana, New Jersey and several other states also have been skyrocketing.

Louisiana, which reported no cases until mid-March, topped the 1,000 mark and the state has seen more than 500 new cases reported since the weekend, with 1,388 cases and 46 deaths by Tuesday afternoon.

In his request to the President, Edwards said Louisiana has more cases per capita than any state, except for New York and Washington.

"We have overwhelmed our stocks of key resources needed for our hospitals, first responders and emergency managers," he wrote.

The state is under a stay-at-home order. Gov. Phil Murphy said not everyone is adhering to the mandate.

"We must have 100% compliance. This is about public health and it's about people's lives. Your employees' lives, their families' lives, and your life," he said.

Michigan's total rose from just 65 cases about week ago to 1,791 on Tuesday afternoon, including 15 deaths. Pennsylvania saw a spike of more than 200 cases overnight, bringing the total to 851 cases statewide. Of those cases, seven people have died.

Florida and Georgia -- two states where political leaders have faced criticism over their timing on enacting restrictions -- both crossed the 1,000-case mark over the weekend and continue to rise significantly each day. As of Tuesday evening, Florida recorded 1,461 cases and 17 deaths, while Georgia reported 1,097 cases and 38 fatalities.

Additionally, Indiana went from a handful of cases about a week ago to 365.

California teen's cause of death is 'complex'

The death of a Los Angeles County resident may be the first juvenile to have died from the novel coronavirus in the United States.

But hours after saying the person died from Covid-19, the Los Angeles County Department of Public Health issued another news release, saying there might now be an "alternate explanation" for the death.

The department characterized the case as "complex" and despite early testing indicating a positive result for Covid-19, further investigation by the US Centers for Disease Control and Prevention would be required.

The teen lived in Lancaster, California, according to county officials.

The news came as more than 52,000 coronavirus cases were reported in the country by Tuesday evening, with nearly half in New York. At least 701 people have died.

"In the mortality data that has been provided to us, there has been no child under 15 that has succumbed to the virus in Europe," Dr. Deborah Birx, White House coronavirus response coordinator, said during a briefing Monday. "There was the one 14-year-old in China. So we still see that there is less severity in children, and so that should be reassuring to the moms and dads out there."

According to studies, two children, a 10-month-old infant and a 14-year-old boy, died in China after being infected with the novel coronavirus.

The 10-month-old who died had a preexisting condition. The child experienced multi-organ failure and died four weeks after being admitted to a hospital in Wuhan, according to research published last week in the New England Journal of Medicine.

The 14-year-old boy from Hubei province died February 7. No further details were available on his death, which was reported in a study published last week in Pediatrics that looked at 2,143 children with confirmed or suspected coronavirus.

Cuomo wants all of what he called a current federal stockpile of 20,000 ventilators to brace for the coming "apex" in cases, which he says will arrive in as soon as 14 days.

"(After) we get over that curve ... I'll send ventilators, I'll send health care workers ... around the country."

The governor said his state was trying to address two other needs: more hospital beds and more medical staff.

He said the state needed 140,000 hospital beds for an anticipated patient apex in as in soon as two weeks, yet the state now has only 53,000 beds. Cuomo said he was speaking to hotel owners "about taking over their hotels" to place some patients.

"I will turn this state upside down to get the number of beds that we need," he said.

About 1,000 beds are being set up in Manhattan's Javits Convention Center. Those beds generally will be for noncritical overflow patients, freeing up intensive care units in hospitals, Cuomo said.

Cuomo's comments come as general stay-at-home orders -- intended to slow the spread of the disease so medical professionals can better handle incoming cases -- will be in effect in at least 17 states by Wednesday.

While President Donald Trump has expressed a desire to soon transition away from social distancing to help the economy, public health experts and physicians are generally urging they stay in place longer, as cases are nearly overwhelming health care systems in New York City and other areas.

"The (distancing) we have put in place over the last eight days ... you won't see the impact of that for at least another seven or 14 days," said Birx, the White House coronavirus response coordinator, on NBC's "Today" show.

"What we're seeing in hospitals right now are people who most likely got exposed and sick more than two weeks ago," she said on "Today."

White House aides are scrambling to find a compromise option. Discussions include a phased system in which younger people -- potentially under 40, according to one option -- return to the workplace or business first, followed gradually by people slightly older until most of the country is back to normal, officials say.

Last week, the White House released guidelines urging Americans to avoid eating at bars or restaurants and skip out on gatherings with more than 10 people for the rest of March.

Health officials have said a lack of firm federal direction and residents ignoring social distancing guidelines could result in more sharp increases of cases and hospitalizations that will overwhelm the country's health system.

Supply shortages aren't unique to New York. Doctors have sounded the alarm on dwindling medical supplies across the country.

When it comes to personal protective equipment, Dr. Jason Halperin of Crescent Care in New Orleans told CNN staff was in "urgent need of everything."

Working in a hospital without that protective equipment, a nurse in a South Texas hospital told CNN, is like "going to war with a water gun."

"We're being told that we have to use these until they're soiled, and if they get to that point, we have to show them to our (supervisor)."