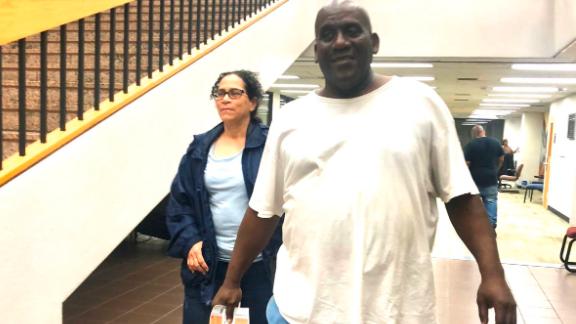 Some voting places in Texas stayed open late to make sure everyone who wanted to vote, could. This man was one of the last to walk out after waiting in line for several hours.

A number of voters in Texas, many of them black and brown, waited in huge lines to vote in the Lone Star State's Democratic primary on Super Tuesday, reminding the nation of the high cost of the Supreme Court's 2013 Shelby v. Holder decision to repeal voting rights enforcement.

The high court's decision to end the pre-clearance requirement that mandated that states under the jurisdiction of the Voting Rights Act of 1965 (such as Texas) submit plans to alter voter access to the Justice Department has produced utter chaos, especially in communities dominated by people of color.

At Texas Southern University in Houston, voting lines wrapped around buildings with people standing in line for more than five hours to cast their ballots, long after the polls had officially closed.

A similar story played out in San Marcos, Texas, at the LBJ Student Center at Texas State University. There, massive lines of patiently waiting students and citizens curled through parts of the surrounding neighborhood and campus to vote. At the University of Texas in Austin, where I teach, some students had to leave the line after waiting over an hour and a half to vote.

These long lines to some extent indicate unexpectedly high voter turnout -- but they also evoke statewide efforts at voter suppression that have gone unabated since 2013. In Texas, at least 750 polling places have been closed since then, forcing many predominantly black and brown people to travel longer distances to exercise their citizenship rights.

A report from the Leadership Conference on Civil and Human Rights notes that Texas, now no longer subject to Justice Department pre-clearance under the Voting Rights Act, leads the nation in polling place closures. That report's authors write that "closing polling places has a cascading effect, leading to long lines at other polling places, transportation hurdles, denial of language assistance and other forms of in-person help, and mass confusion about where eligible voters may cast their ballot. For many people, and particularly for voters of color, older voters, rural voters, and voters with disabilities, these burdens make it harder -- and sometimes impossible -- to vote."

Some voters took to social media Tuesday to voice their displeasure, receiving support and statistical documentation from non-profit groups such as the Texas Civil Rights Project that their fears of being subject to voter suppression were not unwarranted. Twitter users uploaded pictures of citizens waiting in line for hours to vote, many featuring large numbers of African American and Latinx voters.

Harris County Clerk Diane Trautman tweeted Tuesday that her office had proposed a joint primary election, "which would have allowed voters to vote on any available machines." In a subsequent tweet linked to a press release from the Harris County GOP, Trautman wrote that "one party agreed" to this arrangement but the other "did not." The Harris County GOP did not immediately reply to requests by local press for comment.

The consequences of voter suppression in Texas are especially important this year for at least two reasons. First, it is a national presidential election year, one in which officials are anticipating unprecedented interest and voter turnout across the state. Super Tuesday's long lines offer a snapshot of what to expect this November -- unless dramatic remedial efforts happen statewide before the general election.

Long lines hurt voter enthusiasm and diminish our democracy. Communities of color are especially vulnerable to a variety of instances that make voting inaccessible or burdensome. Outright closures and other voter suppression efforts exacerbate other challenges Americans face getting to the polls -- responsibilities ranging from attending classes to working several full-time jobs and family care duties that may preclude them from participating in the process.

The second reason is equally crucial. Saturday marks the 55th anniversary of "Bloody Sunday," when Alabama State Troopers ruthlessly assaulted peaceful civil rights demonstrators attempting to cross the Edmund Pettus Bridge in Selma, Alabama. Congressman John Lewis still bears the physical and emotional scars from that violent day. Yet Selma proved to be the key to establishing the Voting Rights Act five months later, with the brutal images from that day touching the hearts and minds of the nation.

In recent remarks at a commemoration march in Selma, Lewis -- currently battling advanced cancer -- implored voters to make the ballot box "a nonviolent instrument or tool to redeem the soul of America."

The tragedy of modern-day voter suppression is that it echoes the very same institutional and political mechanisms designed to deny the black vote after Reconstruction. The removal or displacement of polling locations, the proliferation of broken, missing or faulty machines, and long lines that stretch for blocks and last for hours into the night, discourage people from voting and being active citizens.

Perhaps the silver lining in these events is that Texas has earned national visibility as a state. The whole country has now seen that, contrary to its best image of itself, Texas makes it extremely difficult for some of its residents to vote, a contemporary reality that reflects some of Selma's dark legacy -- a historical blight many of us thought we'd long overcome.

Lewis' words this year at Selma were prescient -- and as more primaries and the general election approach, I hope Americans heed him.

Hi: 55° Lo: 35°
Feels Like: 42°
More Weather
Light rain and snow is expected in your Friday forecast. We'll be mostly dry and warmer on Saturday. A more substantial system with lower snow levels is in your forecast for Sunday into early Monday. Long range models are showing very wet weather for the middle of next week.

Man arrested at Oroville Casino for possession of a concealed firearm