The real opposite of Trump isn't Sanders 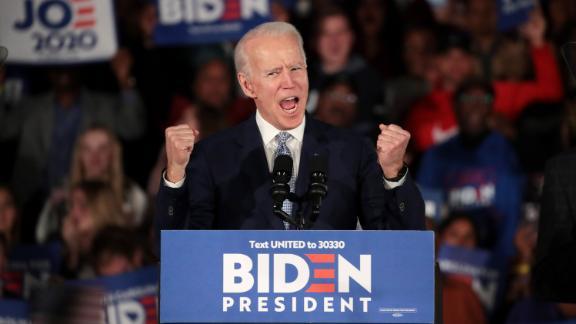 CNN's John Avlon breaks down Joe Biden's dominant South Carolina primary win, and how it may change the race for the 2020 Democratic presidential nomination.

There's a theory that every new president balances out the previous occupant of the Oval Office.

So Jimmy Carter's promise of honest and ethical government was a counterweight to Richard Nixon and Watergate. Confident California conservative Ronald Reagan ran as the anti-Carter. After Bill Clinton's scandals, George W. Bush said he'd "restore honor and decency" to the White House. Freshman Senator Barack Obama offered a stark departure from George W. Bush's dynastic presidency. And, of course, Donald Trump was the polar opposite of "No Drama" Obama -- a man he'd baselessly accused of not being born in the United States.

By this logic, it's easy to understand why some folks see Bernie Sanders as the ultimate contrast to Donald Trump: a Democratic socialist and Sixties-style revolutionary who rails against millionaires and billionaires. But take a step outside the class-warfare paradigm and let's look at contrasts in character and experience -- qualities which typically drive a decision of who to hire for a big job.

Even his critics concede that Joe Biden is known for his decency and empathy among longtime colleagues in the Senate. "As good a man as God ever created," attested a teary-eyed Senator Lindsay Graham back in 2015, before he went full Trump. Here's what John McCain said about him: "He is a good and decent man, God-fearing and kind, a devoted father and husband and a genuine patriot who puts our country before himself."

Every line in McCain's tribute offers a clear contrast to President Trump. Even his defenders would not offer up "good and decent" and "devoted husband" as the President's prime attributes. In fact, according to an AP-NORC Center poll, among the first words that Republicans associate with President Trump are "bumbling" and "jerk."

And at a time when the key criteria for major government positions, like Director of National Intelligence, seems to be unquestioning loyalty to Trump, a candidate who embodies experience with a record of putting country above self-interest would be a huge relief to many Americans.

With Sanders and Biden the two candidates most likely to scoop up delegates on Super Tuesday, we'll get some insight into who is seen as the strongest alternative to Trump.

In the last 24 hours, we've seen the center-lane in the Democratic field clear up considerably with Pete Buttigieg and Amy Klobuchar, two proud Midwestern moderates, bowing out and endorsing Biden.

That's the downstream effect from Biden's blowout win in South Carolina that revived his campaign like Lazarus.

After losses in Iowa, New Hampshire and Nevada, Biden won every county in South Carolina. Every. Single. One. Amid massive turnout, he got more than 260,000 votes -- nearly two-and-a-half times more than Sanders, who came in second with over 105,000.

To put this in perspective, Biden won more votes in South Carolina than Sanders won in the first three states combined.

In fact, while Sanders leads in delegates, Biden has actually won more votes in the Democratic contest to date.

Not only was South Carolina far more diverse than Iowa or New Hampshire, it was the most representative of the overall Democratic Party.

In terms of ideology, 19% of SC primary voters described themselves as very liberal, 30% as somewhat liberal, 41% are moderates and 9% call themselves conservative.

This is broadly in line with a 2019 Pew analysis of the Democratic Party by ideology.. Biden's landslide was so large, he won all the ideological groups across the board.

African-Americans made up a majority of the South Carolina primary electorate, and Biden won 61% of the black vote -- thanks in part to Representative Jim Clyburn's decisive endorsement -- while Sanders carried just 17%.

But Biden cleaned up across almost all demographics -- winning men and women, veterans and independents as well as first-time voters. Biden won urban, suburban and rural voters. While Sanders carried voters under 30, people who said they never attended church and non-college educated white men (white women without a college degree went for Biden).

Now, the momentum may have shifted back to Biden -- who led in most polls throughout 2019 -- but he had just 72 hours to translate that energy into Super Tuesday, when roughly a third of all Democratic delegates will be decided.

X-factors abound. Super Tuesday will be the first time we'll see Mike Bloomberg on the ballot, testing the power of the hundreds of millions of dollars he's spent already as well as campaigning in states that the other candidates have essentially ignored while they have wrestled for success in the first four states.

Bernie will have the benefit of his front-runner status that presumably will give him a boost in early voting. But we'll see if Biden's strong showing among African-Americans in South Carolina will boost his chances in Southern states voting on Super Tuesday, including Alabama, Arkansas, North Carolina, Tennessee and Virginia -- where Biden recently received the endorsement of Virginia Senator Tim Kaine, former Governor Terry McAuliffe and former Republican Senator John Warner.

As we sift through the Super Tuesday vote totals later this week -- including California and Texas -- it's worth asking which candidate has the best chance of carrying purple and even red-leaning states in the fall and not just in a polarized Democratic primary.

We have plenty of evidence from Team Trump that they want to run against Sanders -- with the President even encouraging Republicans to vote for Sanders in South Carolina.

In contrast, we know that President Trump was so nervous about running against Joe Biden -- who is less susceptible to pre-fab "radical socialist" attacks in the general election -- that the President pushed Ukraine to announce an investigation into Biden and his son Hunter to hurt the former vice president's candidacy. It led to Trump's impeachment. The GOP's talk of Hunter Biden and Burisma has been comparatively quiet in the weeks since Sanders won New Hampshire and Nevada. We'll see if it reignites in Republican circles now. I'd bet yes.

But let's get back to that core question of contrast in terms of character and experience.

For better or worse, Joe Biden is a known quantity -- someone who won his Senate seat at age 29 in 1972, when Sanders was a Castro-admiring activist. It was nine years before Sanders would be elected the socialist mayor of Burlington. When Biden first ran for president in 1988, Donald Trump was building his brand as a real estate tycoon in New York City, before his first bankruptcies and subsequent reality TV stardom.

The 1988 campaign was famously chronicled by Richard Ben Cramer in a classic tome called "What It Takes." The chapters on Biden show a scrappy, middle-class kid from Scranton with a stutter who was "tough from the neck up." He was flawed but fearless and fought for what he thought was right. He took on a two-decade Democratic incumbent in a race no one thought he could win. Soon after, he suffered the loss of his first wife and unborn daughter in a car crash that severely injured his sons. But he worked through the pain and deepened his faith.

In the Senate, he was a JFK Democrat wary of extremes and elites who might alienate middle class and blue-collar workers from a compassionate vision of government that helped everyone get ahead in life. He thought that special interests -- in the words of Cramer, "had become so wedded to their programs — old 'solutions' — that they made busing the issue, instead of equality in education. They let food-stamp fraud become the issue, instead of food for the hungry."

By the time the 1988 campaign came around, Cramer described a Joe Biden driven by the conviction that people did not want to go back to the "fiction of an America that was right, and white, and neatly authoritarian in its prejudice [and] politics...If Biden was right, what the country wanted was a more perfect realization of its old ideals: Liberty, Justice, Compassion."

In 2020's deeply polarized America, those old school ideals -- just like the personal virtues of decency, empathy and experience -- might provide the most compelling contrast to the Trump presidency. It might attract a broad coalition -- including swing voters in swing states -- and it might even help begin the daunting task of reuniting the nation.