Harvey Weinstein is convicted. Now what? 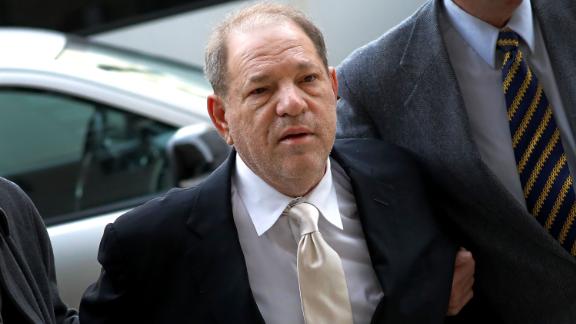 CNN legal analyst Paul Callan describes the differences between the five charges laid against former media mogul Harvey Weinstein. Weinstein was found guilty of committing a criminal sex act in the first degree involving one woman and rape in the third degree involving another woman.

In so doing, jurors indicated that they could not find beyond reasonable doubt that Weinstein had also raped Annabella Sciorra, an additional victim whose testimony was crucial to prosecutors' portrayal of Weinstein's behavior as part of a larger pattern. Weinstein pleaded not guilty and claimed all encounters were consensual and that the women were trying to advance their careers.

Consider the split outcome in light of this: After the New York Times broke the story about Weinstein's alleged history of predation, 80 different women came forward to accuse him of sexual violence or harassment, according to Ronan Farrow' book "Catch and Kill" (And no, that number isn't a typo).

The fact that only two of them have obtained any semblance of justice in the criminal system is a reminder of how staggeringly difficult it is for women and other survivors of sexual abuse in this country to hold perpetrators accountable -- on top of the difficulty of dealing with the traumas themselves.

There are two things that lawmakers need to do now to start to change things: prioritize laws governing the use of non-disclosure agreements and work harder to help educate the most vulnerable about their rights to fight back.

Farrow's book, as well as Jodi Kantor and Megan Twohey's "She Said," makes clear so many of the reasons why Weinstein got away with his behavior for so long: Women were afraid that accusing Weinstein would ruin their careers in cinema, and Weinstein had a powerful cabal of media executives, lawyers, and even private intelligence firms working to protect him because he wielded so much money and power to determine the fates of people and projects in Hollywood.

For example, according to "Catch and Kill," when Farrow began reporting on allegations against Weinstein for NBC, the network did not air the story -- a story which was so important that Farrow later won the Pulitzer Prize for his reporting, along with Times reporters Kantor and Twohey -- so he gave it to The New Yorker.

Farrow suggested NBC didn't run the story because it was vulnerable to similar allegations against Matt Lauer, which NBC News President Noah Oppenheim vehemently denied, saying that "we didn't feel that we had all the elements that we needed to air it" and Farrow did not prove a coverup. Oppenheim wrote and sent a memo to employees of NBC News and MSNBC in response to Farrow's reporting in the book, alleging: "It is built on a series of distortions, confused timelines and outright inaccuracies."

Lisa Bloom, the prominent lawyer otherwise known for championing victims, represented Weinstein for a time. And Weinstein was a big fundraiser for Hillary Clinton, even though both Tina Brown and Lena Dunham now say they warned Clinton's campaign about his treatment of women.

In fact, Farrow wrote that when he was working on his story, he was told by Nick Merrill, Clinton's spokesperson, that his reporting was "a concern for us." After the book's publication, Merrill tweeted to take issue with some aspects of Farrow's version of events with Clinton and Weinstein, though he did say "I genuinely respect Ronan's work" and did not dispute his statement of concern. As Kantor and Twohey noted in their book, after the Weinstein revelations became public, "Clinton and her team expressed shock and denied the extent of Dunham's warning." In October 2017, Clinton said she would give Weinstein's donations to her campaign to charities.

But Weinstein also relied on another level of protection: non-disclosure agreements with his employees and secret settlements with some of the women who accused him that left them liable for exorbitant sums if they spoke out about his abuse.

Such gag agreements were also used to prevent accusations from becoming public against serial predators Bill O'Reilly and R. Kelly, who have denied the accusations against them, and Lawrence Nassar, the USA Gymnastics coach.

Enough is enough. A bill currently in committee in the New York State Senate would require that such settlements be reported to the attorney general's office. We need a law like this at the federal level, so that those who make multiple settlements can be investigated.

Nicholas Fortuna, managing partner of the law firm Allyn & Fortuna, told me the best way for this to work would be for these agreements to be reported to the Equal Employment Opportunity Commission, which could initiate administrative proceedings against people or organizations that repeatedly make such settlements.

There's a good reason that NDAs have become a hot topic on the 2020 campaign trail, with Elizabeth Warren lambasting Mike Bloomberg and Bloomberg saying that he would release three women held to silence about alleged sexual harassment and discrimination under NDAs with his company if they request it -- it's because we need government to take action on this crucial issue.

Second, lawmakers need to help victims learn their rights and avenues for redress -- especially those who are most disenfranchised. If it's hard for Hollywood actresses like Ashley Judd -- whose sexual harassment case against Weinstein was thrown out of court by a judge and characterized as not justified by Weinstein's attorney -- to pursue justice, consider how difficult it would be for people with far fewer resources.

Americans living in poverty are much more likely than their richer counterparts to report experiencing abuse in the first place. As FiveThirtyEight calculated, the Bureau of Justice Statistics' 2017 National Crime Victimization Survey found that Americans over age 12 whose household incomes were below $7,500 reported being sexually assaulted or raped in the six months prior to the survey at twelve times the rate of those with household incomes over $75,000.

Bernice Yeung's book "In a Day's Work: The Fight to End Sexual Violence Against America's Most Vulnerable Workers," tells the stories of some of the poorest women in America who have experienced sexual abuse, including agricultural workers, domestic workers, janitors and immigrants. Women in these industries report experiencing abuse at remarkable rates. One study of 100 meatpacking workers in Iowa, for example, found that 41% of women reported unwanted touching. But, Yeung wrote, there are "few meaningful efforts to prevent workplace sexual violence before it starts."

Also, according to Yeung, many of these women don't know their rights and options after they've been abused. Language barriers frequently make it more difficult for them to report crimes. They often aren't viewed as credible when they do come forward. And the consequences of speaking up are especially severe for them, including sometimes being unable to feed their families if they lose their jobs and deportation.

The government also needs to do more to educate the most vulnerable Americans about their rights. The federal government should allocate resources similar to the privately-funded TIME'S UP Legal Defense Fund to help victims seek redress and find new jobs and other support they need after being abused. Even if it's unlikely that the Trump administration will take such action, governors could initiate programs in their own states to lead the charge.

If at least 80 women have to say they've been abused or harassed before one man is held accountable, something is very, very wrong with the way our system works. And if women with plenty of ability to command attention -- like Gwyneth Paltrow, Ashley Judd and Salma Hayek -- struggle to speak out and obtain justice after being abused or harassed, imagine how difficult it is for poorer Americans, who are most likely to become victims in the first place and have far more devastating repercussions like poverty or deportation to fear.

Settlements in sexual abuse cases need to be reported to the government, so that serial offenders can be identified and investigated. And victims in this country need places to turn to learn their rights and rebuild their lives when reporting abuse means putting the way they earn their living on the line.