The unseen toll of traumatic brain injuries: One veteran asks, 'What if they could just cut my head off?' 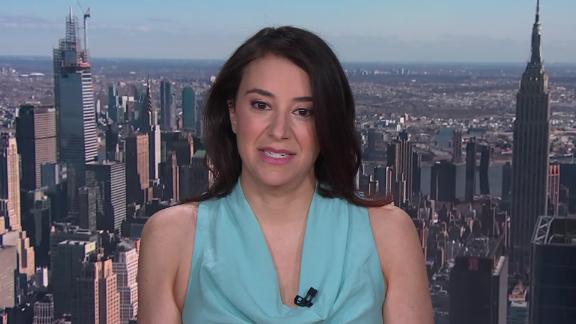 US Army veteran Elana Duffy explains the reality of living with a traumatic brain injury and a missing limb to CNN's Brianna Keilar.

Take one look at Army veteran Elana Duffy and you'll notice her leg, which was amputated after she sustained major nerve damage in a Humvee crash while serving in Iraq.

But when strangers approach Duffy to thank her for her sacrifice, she often tells them that the lasting impact of losing her leg does not compare to the daily pain she endures due to an injury invisible to the naked eye: a traumatic brain injury.

"I've said it before: What if they could just cut my head off?" she told CNN.

Duffy has experienced slurred speech, migraines, facial paralysis, vertigo, memory loss and vision problems. It took more than two years before she was diagnosed with a brain injury and rushed into emergency neurosurgery at Walter Reed National Military Medical Center.

TBIs, the signature injury of the protracted wars in Iraq and Afghanistan, are often persistent, debilitating and life-altering. They can also be deadly.

"A brain injury is no joke, and it can be a living hell," says Kit Parker, a research scientist and professor at Harvard University, who specializes in TBIs and currently serves as a lieutenant colonel in the Army Reserves.

"Brain injuries are a catalytic event for [diseases like] Alzheimer's and Lou Gehrig's disease. A lot of time these people are not diagnosed until their 60s. Some of these same soldiers are seeing these symptoms in their 30s."

Last month, as President Donald Trump tried to deescalate tensions with Iran after its retaliatory airstrike on an Iraqi military base housing US soldiers, he stressed that no Americans were harmed.

But in the weeks that followed, the Pentagon revised upward multiple times the number of service members suffering traumatic brain injuries of varying degrees as a result of the attack. There are more than 100 confirmed TBIs, the Pentagon now reports, some cases severe enough to prompt the military to evacuate service members to Germany for treatment.

"I heard that they had headaches and a couple of other things, but I would say and I can report it is not very serious," the President said when asked about initial reports that some service members had been evacuated out of the combat zone.

Even nonpartisan veteran service organizations, who make a point of staying out of politics, were aghast. They count TBIs as one of the top health issues facing vets and worry the President's comments could jeopardize hard-won awareness about TBIs and discourage service members and veterans from taking their symptoms seriously and seeking potentially lifesaving treatment.

Still, the President did not retreat from his comments. In an interview earlier this week he said, "I viewed it a little bit differently than most, and I won't be changing my mind on that."

But since 2000, TBIs have changed the minds, literally, of 350,000 service members like Duffy, according to the Defense and Veterans Brain Injury Center. Most of them also suffer from post-traumatic stress.

In 2005, Duffy was riding in a Humvee when a roadside bomb exploded as her convoy rolled by, the force throwing her head back into a metal plate inside her armored vehicle. Her helmet was no match for the concussive force.

She describes it as "being hit by a freight train from the front and a brick wall from the back. My head had nowhere to go."

Duffy was immediately dizzy and kept losing her balance.

"I didn't know anyone's name or where we were or what we were doing. But I was terrified that I was for some reason just losing my mind."

Duffy was worried if she reported her symptoms it could endanger her security clearance and even end her career.

Two and a half years later, an MRI revealed a life-threatening mass of coagulated blood in the center of Duffy's brain. Unbeknownst to her, she had been living with a ticking time bomb inside her head. She was lucky to still be alive.

The military ultimately awarded Duffy a Purple Heart -- for her TBI, not for her leg.

Ryan Britch was serving in the Vermont Army National Guard when he deployed to Eastern Afghanistan in late 2009.

He was regularly conducting patrols with his unit and they encountered enemy forces about once a week, he says, often exchanging mortar fire.

Britch recalls multiple close calls with incoming mortars, but one particular explosion at close range shortly before he was due home changed his life forever.

The shell exploded about 10 meters away.

"That's really when I started noticing differences in my personality," he says. "Dizziness, headaches, memory and concentration issues. I was very irritable. Some of my best friends had turned into my enemy."

Still, he didn't connect the mortar blast to his symptoms. After all, he hadn't been hit by an improvised explosive device. He didn't understand his brain could still be injured by his exposure to explosives.

After returning home from combat, Britch was at the grocery store when dizziness overwhelmed him and he fell to his knees.

"There's a lot of symptoms that overlap with post-traumatic stress. Mostly memory issues and irritability, but the dizziness and the headache and me falling down and losing my balance, I knew there was something wrong."

Doctors discovered that Britch had a TBI. He began managing his symptoms and, over time, saw improvement. Still, it made his daily life hard.

After leaving the army, Britch went to college. He had difficulty concentrating and interacting with his peers and couldn't read and write the way he had before his injury. He was plagued by irritability and frustration.

"My relationship with my girlfriend at the time was a complete disaster, probably because of my PTS and TBI, looking back on it now," Britch says.

He currently works for the Iraq and Afghanistan Veterans Association, a nonpartisan veterans service organization, raising awareness about TBIs and other veterans' issues.

It's true that headaches are a hallmark of TBIs, but they can't be casually dismissed as minor symptoms.

"It's not a headaches like you or I would have," says his fiancée, Sara. "I've seen people with migraines and that's terrible. But when you see what Nick goes through with a headache it's different."

Sometimes he wakes up with them. Sometimes they strike with little warning in the middle of the day while he's at work as an IT field technician for a health care company. The headaches usually last through the night and sometimes they're so bad he throws up.

In 2006, when Jason was on his second of two back-to-back tours in Iraq, he perched atop of his amphibious assault vehicle, which doubled as a troop carrier, helping provide security at an Iraqi police station an hour outside of Fallujah. With his legs inside the turret, he reached down to grab his cigarettes from his ankle pocket. That's when a rocket propelled grenade tore through the engine block and shrapnel went flying.

"I fell down the turret and bent over like a taco. Somebody dragged me out. They thought I was dead," he says.

Jason was unconscious. He came to and a medic gave him a once-over.

Shrapnel had shredded his flak jacket and helmet cover and his plates of body armor were broken. He was nauseous, his head ached and his back was killing him.

"I didn't know at the time about TBI. Nobody did," he says.

There in Iraq he was diagnosed with soft tissue damage to his back and a stage 2 concussion, given a prescription strength anti-inflammatory painkiller and put on light duty for ten days, performing vehicle maintenance.

About a year after Jason returned home, he and other Marines at the rifle range where he was now working were tested for brain injuries as part of a blanket assessment as the military started to realize the prevalence of the condition.

It became clear that his severe headaches, anxiety, depression, memory loss and strange mood swings were not just from PTSD.

One of his Jason's biggest challenges is memory loss, which he compensates for by writing everything down in his phone immediately.

He spends a lot of time at home with his fiancée and his two children from a previous marriage. He plays bagpipes in a band but mostly avoids public places and the people in them, an aversion that began about the time of his injury.

When people see the Purple Heart tattoo on his arm, the most frequent question it evokes from strangers is "whose is it?"

"It's the equivalent of people getting out of a car with a handicap sticker and they're not limping," he says, of people not realizing that many war wounds are not visibly apparent.

Jason explains that he's uncomfortable being recognized for his injury, but he also wants people to know what he and others are facing.

"If anything, it will help people understand I'm not just being an asshole. I'm having a rough day. And maybe there's a reason for it."