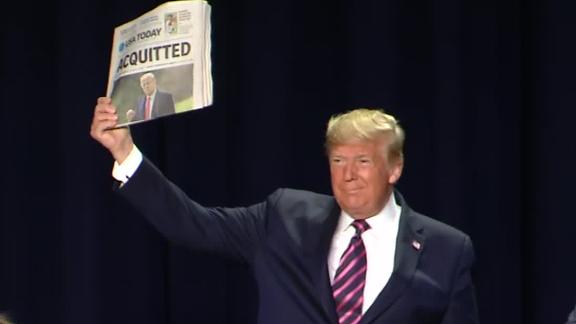 President Donald Trump began his speech at the National Prayer Breakfast by taking veiled shots at House Speaker Nancy Pelosi, who was on the stage with him as he spoke, and Sen. Mitt Romney, the morning after the GOP-controlled Senate acquitted him.

Fresh off his impeachment acquittal Wednesday, President Donald Trump spoke Thursday morning at the National Prayer Breakfast. "Today, we proudly proclaim that faith is alive and well and thriving in America and we're going to keep it that way, nobody will have it changed," Trump said. "It won't happen as long as I'm here, it will never, ever happen."

Trump also took aim at the faith of two political rivals: "I don't like people who use their faith as justification for doing what they know is wrong," he said in reference to Mitt Romney, who cited his Mormon faith as the reason he felt obligated to vote to convict the President. "Nor do I like people who say 'I pray for you' when they know that that's not so," in reference to Speaker of the House Nancy Pelosi.

Romney and Pelosi aren't the only people's faith Trump is casting aside. He rejects the authentic faith and prayers of any and all religious Americans who don't share his narrow definition of conservative, white evangelicalism. He then defines "religious liberty" as the imposition of this flawed "Christian" ideology upon Americans of all faiths and no faith.

During Tuesday's State of the Union, he declared "we don't tear down crosses" and "we don't muzzle preachers and pastors." He said, "My administration is also defending religious liberty, and that includes the constitutional right to pray in public schools." It wasn't a coincidence that Trump didn't mention Buddhist meditation in schools or the right to build mosques in America.

The President's remarks at the National Prayer Breakfast and State of the Union fell flat for millions of religious Americans who are suffering under his administration's policies, including those who are religious minorities, LGBTQ, poor and migrants.

These are the prayers President Trump isn't hearing. White, straight, rich, evangelical men are the only people whose prayers the Trump-Pence administration hears. We see them in the White House and at the National Prayer Breakfast. But there are many more prayers being offered up in America. At least God, I believe, is hearing them all.

Families impacted by his travel ban on mostly Muslim majority nations are praying for our nation to live up to its commitment to religious liberty. Just last week, the Trump administration announced its expansion of its travel ban to six more countries: Nigeria, Eritrea, Tanzania, Sudan, Kyrgyzstan and Myanmar.

During the 2016 election, Trump ran on the promise of a "total and complete shutdown of Muslims entering the United States," as one campaign press release stated. Now as he faces reelection, he's arbitrarily picking countries to ban and score points with his political base.

Trump's assertion during the State of the Union that "We are advancing with unbridled optimism and lifting our citizens of every race, color, religion and creed very, very high" cannot square with what many have perceived as a ban on Muslims. And they're hardly the only religious minority suffering under this administration.

LGBTQ people of faith are praying for our God-given dignity to be respected by our fellow Americans. Trump cited "the eternal truth that everyone is made equal by the hand of Almighty God" while his Department of Justice is arguing against LGBTQ rights at the Supreme Court.

And, finally, Trump refuses to hear the prayers of immigrants and refugees. In addition to the Muslim ban, his administration has attempted to ban pregnant women, asylum seekers and working-class immigrants. Religious groups across the political and theological spectrum have spoken out in favor of welcoming the stranger. One case stands out in particular.

President Trump issued an executive order allowing states and localities to opt-out of refugee resettlement. The Catholic governor of Texas, Greg Abbott, took him up on the offer. In response, all 16 Catholic bishops in Texas called the policy "misguided" and said it "denies people who are fleeing persecution, including religious persecution, from being able to bring their gifts and talents to our state and contribute to the general common good of all Texans."

Sadly, Trump's remarks at the National Prayer Breakfast weren't that surprising. The organizer of the event, the "Fellowship," is a secretive Christian nationalist organization that was recently exposed in a Netflix documentary.

Vice President Mike Pence also addressed the National Prayer Breakfast this morning. "Since the founding of this nation, the American people have relied on prayer," he said.

I don't have a problem with the President, vice president and other leaders praying. To the contrary, I believe it's right and good for political leaders to authentically practice their faith in the public square. Many Americans of all political beliefs rely on prayer. My problem is that the President and vice president are only listening to the prayers of a very small subset of religious Americans.

What you need to know: March 1