Parnas tape is a real problem for Trump 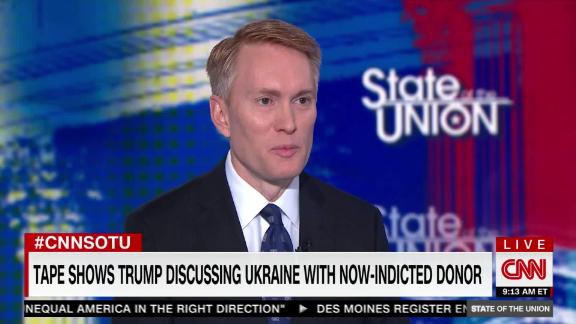 Sen. James Lankford (R-OK) joins CNN's Jake Tapper and downplays the connection between Trump and Lev Parnas. He says he doesn't "see it as a relationship."

"But her emails" became a shorthand way after the 2016 election to explain -- often in jest and as memes -- why Hillary Clinton, who was favored to win, lost to Donald Trump. However, all jokes aside, post-election studies confirmed that Clinton's emails were the most-covered topic during the campaign between May 2015 and November 2016.

That was in part because of the "drip, drip" drip" nature of the scandal over her use of a private email server while secretary of state. New developments -- from investigations being opened and closed to the release of previously unreported emails -- resulted in ever more media coverage.

Well, it's looking like Trump may be facing a similar "drip, drip, drip" type scandal that could result in "but her emails" being replaced after the 2020 election with "but his tapes."

The tapes in question are audio recordings secretly made of Trump by Lev Parnas, an associate of Trump's personal lawyer Rudy Giuliani, who was indicted last year for alleged campaign finance violations to which he has pleaded not guilty. And from what we've seen in past few days, the unexpected release of these tapes has the power to grab headlines, disrupting the media narrative Trump wants to be pushing in this election year and even forcing him or his GOP congressional allies to answer questions about the tape's contents.

What got us here was that a little over a week ago Parnas appeared on CNN and other media outlets to explain that his efforts helping Giuliani and Trump push Ukrainian officials to investigate Joe Biden were not about US national interests or rooting out corruption, but solely to help Trump win in 2020

In response to Parnas' allegations, Trump denied knowing Parnas (again), and the White House even tried to smear Parnas by releasing a statement noting that he is "a man who's under indictment and who's actually out on bail."

But then came the tape. On Friday night, Parnas' lawyer played an excerpt from a recording made at an exclusive dinner for pro-Trump super PAC donors held in a private room at the Trump International Hotel in Washington, DC in April 2018, which Parnas attended along with the President. On the tape, Trump can be heard pushing for ouster of the US ambassador to Ukraine Marie Yovanovitch, a month before she was recalled.

The stunning part is not just the content of his message, but the language Trump used to express his desire to fire Yovanovitch: "Get her out tomorrow. I don't care," adding, "Take her out. OK? Do it." He sounds more like a mob boss ordering a person to be whacked than a president seeking the removal of a political appointee. The short clip went viral for the most of the day Saturday on Twitter with the hashtag #TrumpTapes.

Then in the drip, drip style of the Clinton email scandal, the rest of the audio recording of this dinner -- which totals nearly 90 minutes -- was released on Saturday night. In the full tapes, Trump can be heard mocking Democratic Rep. Maxine Waters as being "low IQ" to big laughs, bragging that he could've beaten President Barack Obama in 2012 and more, which prompted additional news coverage.

But it gets worse for Trump. Parnas' lawyer Joseph Bondy told CNN's Anderson Cooper on Saturday night that Parnas has more recordings of Trump. When asked if he plans to release them in the future, Bondy responded, "Perhaps."

That should keep Trump up at night. Look at what the release of this one tape did.

Even though we are in the middle of Trump's Senate impeachment trial, it made headlines and is resulting in GOP senators being asked to respond to the recordings on national TV. On Sunday morning, CNN's Jake Tapper asked GOP Sen. James Lankford if the tape raised questions about whether Trump lied about not knowing Parnas, to which Lankford responded, unconvincingly, "Certainly the President meets a lot of people."

There's no way to know what is on other tapes that Parnas' lawyer states that exist, or even if there are any. They may be nothing headline-grabbing. But the track record of secret audio recordings featuring Trump has been both damning and newsworthy. Before the election, there was the "Access Hollywood" tape in which Trump bragged about grabbing and kissing women without their consent.

And in 2018, CNN obtained audio of Trump speaking to his former lawyer Michael Cohen, who is now in prison, about an apparent scheme to pay hush money shortly before the 2016 election to a woman Trump allegedly had an affair with.

Who knows what other secret recordings of Trump are out there and how many will be released between now and November. But after this year's elections, if Trump loses, people might just be invoking "but his tapes" the same way "but her emails" came to define Clinton's loss.

Hi: 77° Lo: 45°
Feels Like: 59°
More Weather
Fire danger will be extreme Sunday-Monday as the biggest dry wind event of the season takes shape. A widespread freeze in the Sierra-Cascades as low as single-digit values possible Sunday night. Mild & sunny weather after Tuesday.

DA: Red Bluff man arrested on suspicion of murder will not face charges

Teacher charged with sexual abuse of student headed for trial

New effort to bring more people back to Paradise underway