Trump's lawyers are poised to demolish the Democrats' case 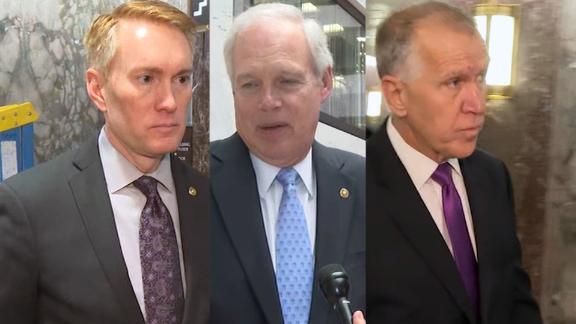 CNN's Manu Raju asks Republican senators about the evidence Democrats have presented against President Trump at his impeachment trial.

A clear constitutional showdown is unfolding in the impeachment trial of President Donald Trump. House managers continue to curate a narrative in support of their articles of impeachment -- abuse of power and obstruction of Congress. And despite House Speaker Nancy Pelosi's desire for impeachment to be "overwhelming and bipartisan," the Senate trial continues to be anything but.

While Democrats say Trump abused his power for personal gain -- that he put himself before the interests of the country -- Republicans argue Democrats are abusing their power in an attempt to reverse the results of the 2016 election. Their motive, conservatives reason, is to overturn the will of the people.

Nothing has been presented in the Senate trial to change that. This process is partisan and lacks legitimacy.

Case in point: Democratic Rep. Jerrold Nadler laid out a legal argument for impeaching the President. In support of his argument, he played video clips from a trio of Democrat-appointed constitutional law scholars who testified before the House Judiciary Committee last year.

Nadler started with Professor Michael Gerhardt, who said Congress should not give Trump a pass, adding, "If what we're talking about is not impeachable, then nothing is impeachable."

Nadler followed that with a clip from Harvard scholar Noah Feldman, who said, "Waiting for the next election wasn't good enough."

And the third legal clip was of Professor Pamela Karlan, who cited the need for impeachment after she claimed Trump tried to steal the 2020 election by inviting foreign interference. She added that "elections matter -- both to the legitimacy of our government and to all our individual freedoms."

The problem with presenting just these three scholars: It ignores those who disagree, and it gives the White House legal team ample opportunity to present the counter legal arguments in its opening statements this weekend. No doubt, they will remind senators of the testimony of Professor Jonathan Turley, the Republican-appointed legal scholar who testified before the same House committee and reached an entirely different conclusion.

Turley acknowledged that Trump's July 25 phone call with the President of Ukraine was "problematic," but impeachment is not the proper remedy -- and this partisan process, he said, was wrong. He asked, "will a slipshod impeachment make us less mad or will it only give an invitation for the madness to follow in every future administration?"

But that's the beauty of this Senate trial. The White House legal team will have their time to point all this out. And Trump's attorney, Jay Sekulow, is ready to make the case that "it's really absurd" to say the President's actions reach the level of impeachment.

Now, Democratic Rep. Adam Schiff and his fellow House managers have done a solid job presenting the case they have. But it has not moved the needle. As Republican Sen. Lindsey Graham referred to it, Schiff is taking the evidence and "creating a quilt out of it."

But the President's lawyers soon have the opportunity to, as Graham puts it, "pull a thread there and see if it holds up." And the fact is Senate Republicans continue to maintain a united front against impeachment and removal from office. Unless there is a new blanket of information, the Senate scales of justice will side on acquittal.

Hi: 91° Lo: 59°
Feels Like: 59°
More Weather
Tuesday was another sunny and unseasonably warm to hot day for much of northern California. It was much like Monday, except the wind was stronger, and the wind will be much stronger through much of the next week.

Hwy 99 near Centerfolds back open after head-on collision