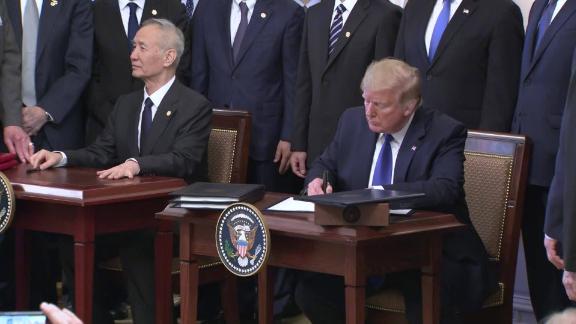 After nearly two years of a trade war, China and the United States signed a partial trade agreement at the White House.

You are now free to eat as many leafy greens as you want. The CDC and the FDA have announced that the long nationwide E. coli outbreak tied to romaine lettuce is officially over.

Here's what you need to know to Get Up to Speed and Out the Door.

(You can also get "5 Things You Need to Know Today" delivered to your inbox daily. Sign up here.)

The long, confusing, uncertain wait is over. The House officially sent the articles of impeachment to the Senate last evening (there was a whole signing event and procession and everything). There will be more pomp and circumstance today, when the House's seven new impeachment managers read the articles aloud in the Senate. Then, Supreme Court Chief Justice John Roberts will swear in senators. After that, the Senate trial can officially start Tuesday, and everyone can stop pontificating over what happens next. The Senate also released its decorum guidelines for the trial, which read like the rules of a high school exam: no phones, no talking and no outside reading. President Trump reacted to this new phase by calling the impeachment a "hoax" during a conversation with Republican senators. Get briefed on the latest evidence and revelations in the historic process with CNN's Impeachment Watch podcast.

The entire Russian government is resigning. Yes, you read that correctly. We're talking the whole Cabinet and Prime Minister Dmitry Medvedev. The mass exodus was triggered when Russian President Vladimir Putin proposed sweeping changes to the constitution that would weaken his successors and allow him to hold on to power after his presidential term is up in 2024. Political experts have long suspected that Putin would find a way to ensure his continued influence in the country, and these proposals would pave the way for him to, for instance, step into a prime minister role specifically enhanced by this power shift. Opposition leader Alexei Navalny, one of Putin's biggest critics, said it's clear that Putin's goal is to remain Russia's "sole leader for life." His critics aren't the only ones starting at the news: The Russian ruble briefly fell by 0.6% after the mass resignation, which is a big drop for a major currency.

After two years of back-and-forth tariffs, strained negotiations and economic squabbling, an initial US-China trade deal is officially on the books. As part of the deal, Beijing pledges to more than double its purchases from American farmers in the first year of a broader $200 billion package that will include more manufacturing and energy exports in the future. In return, the US agreed to reduce tariffs on $120 billion in Chinese products. Leaders on both sides have said this is a good first step in repairing the rift between the two powerful economies, but there is still work to be done. For instance, this deal doesn't include any promises from China to reduce tariffs on US goods. President Trump says the next round of negotiations, which are expected to address tougher economic issues, will start soon.

The Trump administration is facing major pushback on some recent immigration policy changes. The American Civil Liberties Union and immigrant rights groups sued the administration, saying its policy of deporting asylum-seekers from the US is dangerous and doesn't help migrants find refuge. This policy was cemented last year when the US designated Guatemala, Honduras and El Salvador as "safe third" countries where migrants could be diverted after coming to the US. Meanwhile, a federal judge in Maryland temporarily blocked the President's executive order that allows governors to stop refugee resettlement in their states, saying the order "does not appear to serve the overall public interest."

At least 21 people were killed and more than 60 injured in an airstrike in northwest Syria during what was supposed to be a ceasefire in the region. The ceasefire was brokered Sunday between Turkey and Russia, but since then, famed Syrian volunteer rescue team the White Helmets says it's counted at least a dozen violations of the pact. It blames Russia for the latest strikes. Syrian President Bashar al-Assad has recently stepped up attacks in the last major opposition bastion -- home to 3 million Syrians -- bolstered by the use of Russian air power. If the attacks continue, international aid organizations warn hundreds of thousands of civilians could be displaced.

The list of Rock & Roll Hall of Fame inductees for 2020 was released, and Dave Matthews Band fans are furious their band wasn't included

Now we know who needs help most.

New job seekers may eventually have to learn to nail an interview ... with an AI

As if trying to land a job wasn't stressful enough.

Ken Jennings has won the title of Greatest of All Time on 'Jeopardy!'

"The 2020 election is an American Brexit -- a maximally polarized vote where the risk is less the outcome than the political uncertainty of what the people voted for. It's uncharted political territory, and this time in a country where uncertainty creates shock waves abroad."

The Eurasia Group, an international consultancy that named American politics the top global risk in its 2020 annual report

The number of firearms seized last year by TSA at US airports. That's a new record in the TSA's 18-year history. And 87% were loaded.

There's something sooo satisfying about watching the construction of this amazing guitar -- made with hundreds and hundreds of colored pencils! (Click here to view.)