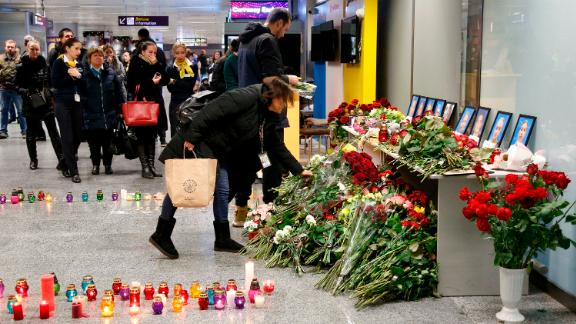 Hassan Shadkhoo says he reassured his wife that everything would be fine before she took off on Flight PS752, which fatally crashed minutes after takeoff from Tehran to Kiev.

For the moment, the crash of a Ukrainian Airlines Boeing 737-800 shortly after takeoff from Tehran, Iran, is a mystery -- and a tragedy. All 176 people on board died.

It is also a huge story, not least because all eyes are already trained on the region at a fraught geopolitical moment.

The fact is there are all kinds of possible explanations for the crash, and only a thorough investigation will provide the real answer of what went terribly wrong.

So what, possibly, could that have been? Obviously we can't speculate till we know more, but I can offer some perspective from my years of flying.

Judging by the relatively small pieces seen dispersed widely over the well-defined debris field of the accident site, the airplane's impact with the earth was at high speed and with great force. In other words, the aircraft didn't skid across the ground striking immovable barriers, i.e. trees, rocks, etc., in an apparent effort at emergency landing. It plunged dramatically and crashed. This implies that the airplane was not in the direct control of the pilots.

If the video circulated by Iranian news agencies -- seen here in a video report from The Guardian -- is indeed of the crashing plane, it may have been on fire prior to impact.

An onboard electrical fire, an explosion from somewhere within the fuselage, or an engine fire could be potential causes. But with an engine fire, the crew is highly trained for such an event. Internal systems allow the pilots to discharge fire retardant material directly into the engine. And the airplane is designed to fly on only one engine.

However, if a catastrophic engine failure occurred -- say a turbine blade or compressor blade failure -- and pieces of the engine were not contained within the cowl (the equivalent of a hood on an automobile, which surrounds the guts of a jet engine), shrapnel could have been expelled. And if shrapnel flew and struck crucial flight controls, the airplane may have become uncontrollable.

Engine manufacturers design the cowl to prevent fan blades, turbine blades, and bearings from escaping and striking strategic areas of the airplane, but not all types of catastrophic engine failures can be reproduced on a test bed, and the cowl may not have done its job.

Could a heat-seeking missile also cause such a catastrophe? Short answer: Yes. But that is speculation. While a spokesman from Iran's military has said the crash did not a result from any military action, new reporting from CNN noted that Ukraine's National Security and Defense council chief, Oleksiy Danilov, wrote on Facebook that a meeting was taking place Thursday with Iranian authorities, where various causes behind the crash were "being studied."

These include the theory that the plane was hit by an anti-aircraft missile, Danilov wrote.

I caution everyone to wait for more information.

The tragedy needs to be treated like any other accident investigation without reaching conclusions until all the facts have been presented. An organized and systematic methodology for such investigations must be conducted according to ICAO (International Civil Aviation Organization) guidelines.

If Iran is interested in determining the cause of the crash, it should share with interested stakeholders, such as the plane's manufacturer, Boeing, the most valuable pieces of evidence: the cockpit voice recorder and the digital flight data recorder. So far it has refused to do so, though it has said it will work with Ukrainian officials on the investigation.

Judging from the number of photos made available from personnel at the crash site, I have concerns that the evidence is not being protected as well as it might be if the United States' National Transportation Safety Board was involved.

What happened? For now, we have little choice but to allow the investigation to progress before drawing conclusions.

Hi: 81° Lo: 44°
Feels Like: 46°
More Weather
You're going to want to take advantage of the dry and nice weather ahead for today. A big drop in temperatures, rain, and snow are all on the way in your weekend forecast.