A Christmas gift for Mitch McConnell 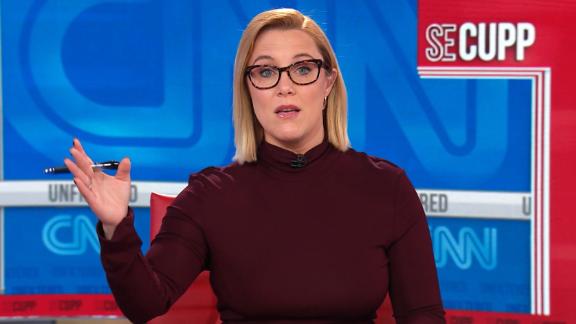 Ahead of the House's historic vote on the articles of impeachment, CNN's SE Cupp blasts Republicans for protecting Trump, saying history will remember the party for enabling the President's "corruption and self-interest."

Senate Majority Leader Mitch McConnell isn't on the holiday gift list of most Democrats but they're preparing to send him something anyway.

If as most people expect, the House votes to impeach President Donald Trump over the withholding of military aid to Ukraine, the matter will land in the Senate. McConnell faces tough choices over how to structure a trial early in 2020, with the Senate ultimately voting on whether to remove Trump from office.

"Unlike the House, where the minority party is more like a spectator when it comes to rules, Senate Democrats do have some power here," observed Joe Lockhart, who served as President Bill Clinton's press secretary during Clinton's impeachment. "Going after vulnerable Republicans up for re-election is one." Republicans hold a slim Senate majority but some of their members may have good reasons for breaking with their colleagues over the ground rules for the trial, Lockhart suggested.

Another factor, Lockhart wrote: "What Democrats want to avoid is a process that gives the President a virtual exoneration on all charges if it's a party-line vote. One thing they could do is ask House Democrats to delay sending the articles of impeachment to the Senate until the White House starts cooperating with Congress or a court compels them to."

McConnell has signaled that he will fall in line with Trump on trial strategy in the Senate, promising "total coordination" with the White House. It's a telling move, wrote Julian Zelizer: "We have reached this moment not because partisan polarization has driven Democrats to impeach Trump. We are here because one party — the GOP — was so hell-bent on preserving political power that it allowed the commander-in-chief's abusive behavior. And it is this sort of partisan protection that allows the President to push the boundaries of what is considered permissible in our democratic system."

The House needs to make full use of its power, including bringing criminal contempt charges against key witnesses who won't testify, argued Danielle Brian: "The House has the authority to compel witnesses to testify, and if it doesn't use that authority, it could accelerate the erosion of congressional oversight power. Make no mistake, the gaps in testimony are due to the Trump administration's blanket obstruction of any congressional oversight."

Whatever happens in the Senate, the reality is that a House vote this coming week could make Trump only the third President to be impeached. Most occupants of the White House, though, have been accused of misconduct, noted Pulitzer Prize-winning historian Joseph Ellis in a piece about a recently reissued book on the topic.

Impeachment is extremely rare, for good reasons, he wrote. But he believes that this time it's the right remedy: "The seriousness of the charges against Trump is unprecedented. The blundered burglary at Watergate and Clinton's personal flair for sexual misconduct pale in comparison with the alleged threat that Trump's behavior poses to the balance of power enshrined in the Constitution...his entire presidency has been conducted on the belief that he stands above the law, is an elected monarch."

Are the two articles of impeachment against Trump solid? Two former federal independent counsels, Robert Ray and Michael Zeldin, who have been trading legal views at CNN Opinion, sharply differed on whether they clear the bar for impeachment. "We're about to witness the first impeachment of a President that does not allege that a crime has been committed, despite the Constitution's text that impeachable conduct is limited to 'treason, bribery, or other high crimes and misdemeanors,'" Ray wrote.

Zeldin countered, "Impeachment is a remedy intended to redress an abuse or violation of some public trust which, in the words of Alexander Hamilton, 'relate chiefly to injuries done immediately to the society itself.' It is not like a trial known in our criminal courts requiring proof of specific statutory elements."

Read other takes on impeachment:

Rick Santorum: Nancy Pelosi gave in to the Trump haters

Secretary of State Mike Pompeo "never saw it coming," wrote Peggy Drexler. In his remarks at a State Department gathering to fete this year's Kennedy Center honorees, including Linda Ronstadt, Pompeo referred to her hit cover of "When Will I Be Loved."

"Ms. Ronstadt," he said, "thank you and congratulations. And I will say my job, as I travel the world, I just want to know when I will be loved?" When it was the singer's turn to speak, the audience gasped at her few words: "I'd like to say to Mr. Pompeo, who wonders when he'll be loved, it's when he stops enabling Donald Trump."

"One lesson anyone of any age, gender or level of fame can take from Ronstadt's bold statement is that the more women use their voices, and speak their minds, the more likely doing so will become the expectation, and not the exception." Drexler concluded.

UK Prime Minister Boris Johnson celebrated a huge general election victory, in a contest that saw support for his party's chief opponent, the Labour Party, plunge. "Those who dislike the Prime Minister usually find it hard to grasp how someone so frivolous, absurd, dishonest and shallow could be taken seriously by so many voters," wrote historian Dan Jones. "The point is that voters have priced in all those things and do not care. Johnson is amusing and he is recognizable. The year is 2019. Like Donald Trump, Johnson has an unmistakable diction and preposterous hair."

As for Johnson's adversary, Labour leader Jeremy Corbyn "proved himself -- not for the first time but thankfully, it seems, for the last -- to be a dislikable, brittle and feeble political campaigner who is in the final analysis unelectable," Jones said.

What's next? Writing in Politico before the votes were cast, Ryan Heath observed, "Many Britons — as the Conservative election slogan notes — simply want to 'Get Brexit Done' regardless of how they voted. Johnson is, for once, betting that the idea of Great Britain is greater than him. That the country will pull together to reinvent itself for its post-Brexit era.... If he succeeds, Johnson will weaken the EU, strengthen NATO and pull closer to the United States."

It was a "Love Actually" style election, wrote Holly Thomas. In a campaign video, Johnson invoked the 2003 rom-com that featured Hugh Grant playing a prime minister. "Johnson's campaign material, which both whitewashes the reality of Brexit and confirms the capacity of 'Love Actually' to toxify everything it goes near, typifies an election characterized by false promises, misinformation and poorly-curated grandstanding from all sides."

Both parties seized on the long-awaited report by the Justice Department's inspector general, Michael Horowitz, on the origins of the FBI investigation of Russian interference in the 2016 election. Democrats stressed that the report found no evidence that political motives prompted the investigation. Republicans zeroed in on the report's criticisms of the FBI's "Crossfire Hurricane" investigation.

Asha Rangappa, one of three former FBI agents who wrote for CNN Opinion, noted, "On the whole, the IG report dispels the charges of political bias against Trump, illegal spying on his campaign, and even 'treason' that have been levied against the FBI and DOJ."

Yet another investigation of the origins of the Russia probe is being conducted by prosecutor John Durham under the aegis of Attorney General William Barr. Both took issue with the Horowitz report this past week.

Josh Campbell wrote, "This ongoing investigation, coupled with Attorney General Barr's past comments that he believes FBI 'spying' occurred against the Trump campaign, could prove fateful for federal law enforcement. For an agency that has been shell shocked by three years of incessant political attacks, and at times subject to robust criticism by both sides of the political aisle, its darkest days may still lie ahead."

Expect "a cacophony of partisan debate for the foreseeable future -- at least through the 2020 election," wrote James Gagliano. "But all that will have little impact on the FBI, which is already hard at work in an effort to rebuild a once 'bulletproof' image that has been damaged over the actions of a few officials and battered by President Donald Trump and his surrogates."

Greta and the word

The Oxford word of the year is "climate emergency." So it was no surprise that TIME magazine named 16-year-old activist Greta Thunberg its Person of the Year. And perhaps it is also no surprise that President Trump attacked her again via Twitter, saying she has an "anger management" problem.

Samantha Allen noted that other words of the year, along with Oxford's choice, tell a story. Merriam-Webster chose the pronoun "they" and Dictionary.com picked "existential."

"It's Generation Z's world now," she wrote. They "are inheriting a world nearing its 'point of no return' from generations who failed to address sweeping — even 'existential' — problems like climate change and gun violence...For many in Generation Z, it seems, the debates that have divided previous generations look a lot more like closed questions: Climate change is real. Gun protections are necessary. LGBTQ equality? That's a no-brainer."

Roxanne Jones: I competed in pageants. I could never have imagined this milestone

Peter Bergen: Trump always has the Saudis' back

LZ Granderson: Someone tell Joe Biden he doesn't need to act like another Trump

Dean Obeidallah: Trump is trafficking in anti-Semitic tropes. It must stop

David Phillips: What tourists don't get about White Island

Gene Seymour: Why 'Moonstruck' actor Danny Aiello was a hero to late bloomers

Lynn Smith: The Peloton ad is a faux controversy

Samantha Vinograd: Prisoner swap shows Iran may be eager to deal with US

Comedian Judy Gold, who was six feet tall by the time she was 13, was teased and bullied about her height, and almost every day someone called her "Big Bird," referring to the 8-foot-2 inch "Sesame Street" character. So when Big Bird's famous puppeteer, Caroll Spinney died this week, Gold might have had mixed emotions. Instead she saluted his work.

"His puppeteering prowess was exceptional. He is being remembered as a remarkable human being. And yet, when he walked down the street, practically no one knew who he was. And he didn't mind that at all....Spinney was -- like Big Bird still is -- all goodness. Spinney, just like Big Bird (and me), had one goal -- to make other people feel happy."

Hi: 68° Lo: 40°
Feels Like: 42°
More Weather
Sunny skies and mild conditions will be on tap for your Friday but a pair of winter storms will bring rain, snow, and the chance for thunderstorms to Northern California through your weekend.

How coronavirus is impacting the housing market