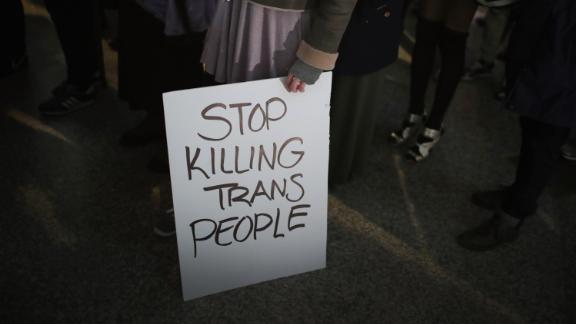 The Human Rights Campaign says at least 22 transgender and gender non-conforming people were killed in 2019. 91% were black women.

"I have learned that life is an adventure and would like to believe that the best is yet to come," read the hopeful note Aimee Stephens sent to her employer in 2013 when she came out to them as transgender.

It's not likely Stephens could have imagined the adventure -- good and unfortunate -- thrust upon her after that letter left her hands years ago, leading up to her final breath earlier this week, as she -- along with many others -- waited for America's highest court to rule on its first case featuring a transgender person -- her -- at the center. The question in that case: whether LGBTQ workers are covered by anti-discrimination law.

Stephens, a funeral director until she was fired shortly after announcing her plan to transition to life as a woman, died after suffering complications of kidney disease at age 59 in Detroit with her wife, Donna Stephens, at her side. In a statement, ACLU lawyer Chase Strangio said, "Aimee did not set out to be a hero and a trailblazer, but she is one. And our country owes her a debt of gratitude for her commitment to justice for all people and her dedication to our transgender community." The case was argued before the Supreme Court in October, and Stephens' death, even coming as a ruling is expected any day, will not change the status of the case.

Stephens said she knew from age five that she was a girl, despite having been assigned male at birth. In 2013, at the age of 52, she was finally able to step into her true self more fully. She had the support of her wife, Donna, and many friends and allies, including organizations like the ACLU and a growing stack of case law.

After two decades dedicated to her profession, Stephens lost her job at Michigan-based R.G. and G.R. Harris Funeral Homes just two weeks after telling her boss that she was transgender. Her employer did not deny that they let Stephens go because of her gender identity, citing that they believed her presence would disturb grieving families.

Because her former place of employment was based in a state that did not have explicit protections for transgender people, Stephens had no immediate grounds to protest her termination. She filed a wrongful termination suit with the federal Equal Employment Opportunity Commission (EEOC) on the basis of sex discrimination. In 2018, the Sixth Circuit Court of Appeals ruled in Stephens' favor that in being fired she had been discriminated against on the basis of her sex After her employer appealed, the case made its way up to the Supreme Court.

The Supreme Court, which weighed Stephens' case alongside another involving two people who say they were fired from their jobs because of their sexual identity, is expected to rule at any time between now and June on whether sexual orientation and gender identity are considered protected classes under existing law. That designation, if granted, would allow discrimination against LGBTQ people protection and relief from discrimination under Title VII of the Civil Rights Act, which prohibits discrimination on the basis of sex. The argument that Stephens and her fellow plaintiffs is making is that sexual or gender identity is inextricably linked to sex. In other words, you are gay because you are a man who loves men; you are transgender because your gender is distinct from the sex you were assigned at birth. A new law isn't needed to protect LGBTQ people from discrimination, the lawsuit argues, because it is already covered under existing federal law.

The case is significant because only 22 states and Washington, DC, currently prohibit discrimination on the basis of sexual orientation and gender identity. That means for anyone working or living in any of the other states, from Arizona to Florida, and many in between, can be fired (or kicked out of their homes or other public places) simply because of who they are or who they love, with no legal recourse or other route to seek justice.

We've seen the ramifications of the gaps in legal protections for LGBTQ Americans play out in different settings, clear disparities that have been, in recent weeks, only exacerbated by Covid-19 and fragile socioeconomic footing. Without the support of policies and legal protections, vulnerable groups living precariously -- such LGBTQ Americans, who, research shows, are more likely to live in poverty, particularly if they are trans people or people of color -- are at tremendous risk, now more than ever.

Worse, the allowance of legal discrimination against LGBTQ Americans has extended to other arenas, including health care, as we've seen play out most recently through the Trump administration's quiet plans to unravel protections put in place under the Affordable Care Act. Once in place, doctors and hospitals would be free to turn patients away simply because they are LGBTQ or don't comport with the health care worker's beliefs. It is an unconscionable posture for a so-called developed nation to take.

Stephens' case and her tragic death bring all of these factors to the surface. Hers is perhaps one of the starkest examples of the impact discrimination can have. Her firing led to a ripple of very real and tangible hardships for Stephens and her family for the years that followed, in what were to be the last years in her life.

Stephens learned she had kidney problems a few years ago but lost her health insurance and income when she was fired. The loss of viable work left her and her wife financially and well-being strained. Stephens faced insurmountable odds because she was transgender, like the one in four transgender people who report losing a job due to bias and the three-quarters of transgender employees who report workplace discrimination. Finding and maintaining gainful employment is an uphill battle for many transgender people.

Her wife set up a GoFundMe page to cover her end-of-life care and anticipated funeral expenses because of the lost earnings. On top of mourning the end of life and their partnership, Stephens and her wife had to also worry about how they were going to pay for her medical care. When her dialysis recently stopped working, Stephens went on hospice and passed away a couple of days later on May 12.

The Supreme Court still has an opportunity to end the patchwork of legal protections that leave millions of LGBTQ Americans unequal and vulnerable to discrimination. While the current configuration of the court doesn't yield strong hope for a favorable ruling on the side of equality, if there's anything we can count on at this present moment in history that is marked by volatility and uncertainty, is that it's anybody's guess what the future will hold.

What better way to honor the brave life and mourn the death of Aimee Stephens than a posthumous vindication of her right to be her true self at work and in the world? Such a step would be an overdue recognition of not merely Stephens' spirit but the innumerable LGBTQ people, for generations to come, who will walk in her footsteps.

Hi: 104° Lo: 63°
Feels Like: 95°
More Weather
A trough of low pressure is moving over northern California this afternoon and tonight, and that will increase our wind speed and raise our area's fire danger even further. The wind will be weaker Thursday, but the smoke will get worse.

Monument Fire grows to 15,000 acres with no containment

Evacuation warnings have been issued for Tehama County

East side of Whiskeytown Recreation Area evacuated due to House Incident