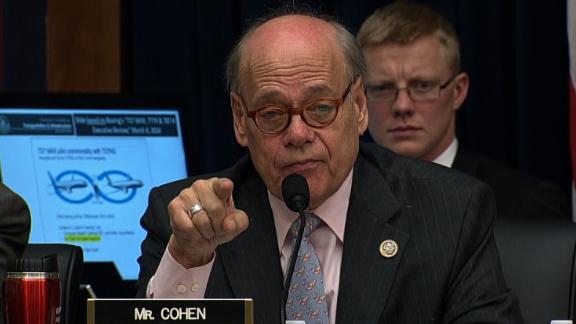 After a contentious hearing where Boeing admitted mistakes and missed red flags about the safety of its 737 MAX jet, a mother whose daughter died in one of the crashes confronted CEO Dennis Muilenburg.

"Go back to Iowa. Do that," said Nadia Milleron, referring to Muilenburg's story about his upbringing that he told the House Transportation Committee several times.

"I don't feel like you understand," she continued. "It's come to the point where you're not the person anymore to solve the situation."

Milleron's 24-year-old daughter Samya Rose Stumo was killed on Ethiopian Airlines flight 302 in March. That and a Lion Air crash last October together killed 346 people and led to regulators worldwide grounding the plane. Boeing continues to work on fixes for the jets, and currently says it expects the plane to be approved for commercial service later this year.

In response, Muilenburg said he respects her viewpoint.

"But I want to tell you the way I was brought up. And I'm just being honest here about it. I learned from my father in Iowa ... when things happen on your watch you have to own them and you have to take responsibility for fixing them," he said.

Muilenburg told lawmakers that in hindsight, he wished the plane had been grounded sooner.

"We've asked ourselves that question many, many times," he said. And if we knew back then what we know now, we would have grounded right after the first accident."

Lawmakers used the hearing to probe a series of mistakes and safety concerns that Boeing missed. Some said the string of decisions showed a company that prioritized profits over safety and fostered a culture of performance pressure, both charges Muilenburg disputed.

"I don't agree with that. Our business model is about safe airplanes," he said. "The reality is it's a competitive environment and the pressure to perform is there."

The flawed design of a stabilization system known as MCAS was one of several mistakes he acknowledged. Faulty input from a single sensor -- known by the acronym AOA sensor -- is believed to be an important factor in both crashes.

Concerns raised within the company

Lawmakers asked about a newly released internal email discussion between Boeing employees in 2015 -- more than a year before the plane's final approval for flight -- raising concerns about that design.

"Are we vulnerable to single AOA sensor failures with the MCAS implementation," the employee, whose name is redacted in the document, asked, raising the exact scenario blamed for the two crashes.

Muilenburg said that email showed that "our engineers do raise questions, in an open culture," but that the single-sensor design met the standards.

The CEO acknowledged that a review of Federal Aviation Administration standards and long-standing industry assumptions about how pilots react to emergencies is warranted.

But committee members raised the prospect the company should have initially made a more stringent design. They pointed to another internal document, dated prior to the crashes, noting that "a slow reaction time" to a MCAS malfunction "found the failure to be catastrophic." In this document, "slow" was defined as longer than 10 seconds.

Rep. Albio Sires, a New Jersey Democrat, asked about another Boeing employee's concerns about safety on the 737 assembly line, where production was being stepped up to fill a long list orders for the popular jet.

"My first concern is that our workforce is exhausted. Employees are fatigued from having to work at a very high pace for an extended period of time," the employee wrote, according to Sires. "Fatigued employees make mistakes."

"Frankly right now all my internal warning bells are going off," the message continued. "And for the first time in my life, I'm sorry to say that I'm hesitant about putting my family on a Boeing airplane."

Muilenburg said he personally discussed the concerns with the employee, and that a team reviewed them. The production rate was not changed in response, he indicated.

The mistakes extended to Boeing's relationship with customers. When the company realized that a cockpit warning light connected to the MCAS system was not operable in many aircraft, it did not immediately inform customers, and continued producing the faulty aircraft, Boeing chief engineer John Hamilton acknowledged.

Muilenburg professed to not understand what the former top technical pilot wrote in internal emails about performing a "jedi mind trick" to convince customers to buy the plane and the FAA to approve pilot training that did not involve flight simulator exercises. Those messages do not represent the company's values, Muilenburg said.

When asked by Rep. Dina Titus, a Nevada Democrat, if he was being deceptive to the committee, Muilenburg answered, "Congresswoman, I'm telling you the truth."

Despite the shortcomings at his company, Muilenburg said he believes the FAA's approach to certifying aircraft as safe is "a solid system that has been built up over decades."

"I think we've identified a couple of areas, we could look at refinements," he said, including "long-standing" assumptions about how pilots react to emergencies.

Muilenburg avoided discussing details of his compensation when pressed by Rep. Steve Cohen, a Democrat from Tennessee.

"Are you taking a cut in pay, are you working for free from now on, until you can cure this problem," Cohen asked.

"Congressman, it's not about the money for me," Muilenburg said. He said the company's "board will make those determinations."

Cohen fired back: "You're not accountable then."

"I am accountable, sir," Muilenburg replied.

Rep. Paul Mitchell, a Republican from Michigan, said he does not "care about bonuses," but asked if Muilenburg had offered his resignation.

Muilenburg said he has not offered to resign, but acknowledged that the crashes "happened on my watch."

Muilenburg's appearance follows a hearing with a Senate committee on Tuesday. In both, he apologized to the victims' family members, who were in the audience.

Muilenburg had his first meeting with victims' families on Tuesday, which marked the first anniversary of the Lion Air crash. He said he wished he had been personally in touch with the families sooner.

"That's something I regret and I wish I had done," he said.

Hi: 62° Lo: 48°
Feels Like: 46°
More Weather
A pair of winter storms will bring rain and snow back to your forecast this weekend. Major travel impacts are expected in some mountain areas.

Fisherman drowns at Pit 7 spillway in Round Mountain

ABC operation leads to arrest and citations in Oroville