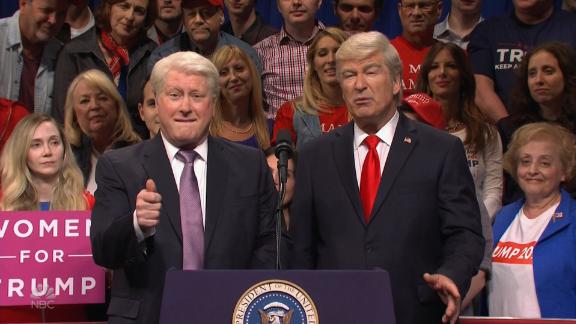 "Saturday Night Live"'s portrayal of Donald Trump's presidency has ranged from hilariously insightful to downright disappointing. But the cold open for this week's show, which depicted Trump at a rally in New Mexico, got it wrong in several major ways.

First, "SNL" slammed Trump supporters -- painting them, collectively speaking, as complete buffoons. That depiction furthers the right's long-standing claim that the entertainment industry has contempt for conservatives. Second, "SNL" positioned Trump as the responsible person, who was a voice of reason, trying to rein in his supporters' worst instincts. Nothing could be further from the truth.

The sketch, which did have some very funny moments, opened with Alec Baldwin as Trump at a rally in New Mexico. After a few jokes at Trump's expense -- such as "Hello, New Mexico, by far my favorite Mexico," the show turned its comedic focus to mocking Trump's base. Baldwin's Trump invited his "loyal followers" to come on stage, and it turned into a parade of the dumbest Americans imaginable.

"SNL" cast member Cecily Strong began the procession, walking on stage while wearing a t-shirt that read, "KEEM AMARICA GREAB AGRAIN." When Trump noted that the shirt appeared to have some misspellings, Strong responded, "No, this was taken verbatim from one of your tweets, therefore it's correct," adding, "The words need to change because you said so, sir!" She then cried out that the impeachment inquiry is "a deep-state liberal conspiracy and everyone's in on it: The CIA, the FBI, the M-I-C, the K-E-Y and the M-O-U-S-E."

"SNL" even mocked "Bikers for Trump" as being dimwitted people who do nothing but ride their motorcycles, with a leather vest clad biker, played by Mikey Day, declaring that riding is "kinda the only thing we do."

There was also Aidy Bryant as a Trump devotee, who screamed out upon taking the stage, "I love you and I worship you as the one true white lord." She then spewed a nonsensical conspiracy about the title of Michelle Obama's "Becoming" actually being some type of "witch word" that ultimately spells the word "trans." She also wanted everyone to know "the Earth is flat, and Beyoncé is white!"

"SNL" then -- in a complete denial of reality -- portrayed Trump as the responsible adult in the room. When Bryant offered her his gun to shoot the anonymous author of the upcoming tell-all book about Trump, titled "Warning," Trump quickly responded, "No, no, no, put that gun away," as he motioned her off the stage.

That same dynamic occurred later when "SNL" alum Fred Armisen appeared as Turkey's President Recep Tayyip Erdogan and offered to not only get "dirt" on Joe Biden for Trump, but to make the former Vice President "disappear." Trump again pushed back stating emphatically, "No, no, no, we don't want to do that."

Are there Trump supporters who are like the people depicted in this sketch? I've certainly engaged with some -- both on social media and on my SiriusXM show -- who have defended every and anything Trump says and does. But "SNL" depicting all of his supporters like that furthers the concept that coastal elites think less of conservative Americans, which fuels their victimhood narrative and even inspires some of them to become more engaged politically. Notably, Trump, despite once having been a part of the entertainment elites (remember "The Apprentice"?), has slammed Hollywood for being unfair to Republicans.

But depicting Trump as the person urging restraint is even worse. This a man who just this week tweeted that Republicans who don't support him "are human scum!" And, at his rallies, Trump has encouraged -- not reined in -- abhorrent behavior. For example, during the 2016 campaign, there were numerous times that Trump called on his supporters to respond to protesters with violence, such as when he declared, "If you see somebody getting ready to throw a tomato, knock the crap out of them, would you? Seriously, OK? Just knock the hell ... I promise you I will pay for the legal fees." Even if he meant it in jest, it's still unacceptable.

And, at his rally earlier this month in Minnesota, Trump ginned up hate of Somali refugees living there. First, he declared to the crowd, "Leaders in Washington brought large numbers of refugees to your state from Somalia without considering the impact on schools and communities and taxpayers," which elicited boos from the audience. He then claimed that Somali-American Rep. Ilhan Omar, who is a representative from Minnesota, was "an America-hating socialist." This comes only a few months after a Trump rally where Trump's attacks on Omar led to his supporters chanting in unison, "Send her back."

Some may say that "SNL" is just a comedy show, so why does it matter? And yes, comedy is often about exaggerations and heightened reality -- I saw that firsthand when I worked on the show's production staff for eight seasons. But the truth is "SNL"'s depictions of politics can have real-world impact on how politicians are perceived. Just ask former vice presidential candidate Sarah Palin. Many believe that during the 2008 campaign, she boasted, "I can see Russia from my house." In reality, she never uttered that statement -- rather it was Tina Fey playing Palin on "SNL." Yet that line came to define her as John McCain's running mate.

In the era of Trump, we need to demand that not only should news media outlets cover Trump accurately, but that entertainment shows with the stature and influence of "SNL" do the same.

Hi: 104° Lo: 63°
Feels Like: 95°
More Weather
A trough of low pressure is moving over northern California this afternoon and tonight, and that will increase our wind speed and raise our area's fire danger even further. The wind will be weaker Thursday, but the smoke will get worse.

Monument Fire grows to 15,000 acres with no containment

Evacuation warnings have been issued for Tehama County

East side of Whiskeytown Recreation Area evacuated due to House Incident

People in Greenville are now urged to leave immediately