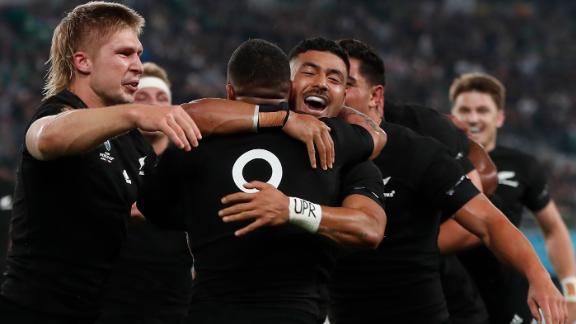 New Zealand raised the bar once again at this Rugby World Cup quarterfinal match by booking its place in the semifinals with a seven-try, 46-14 mauling of Ireland.

New Zealand raised the bar once again at this Rugby World Cup quarterfinal match by booking its place in the semifinals with a seven-try, 46-14 mauling of Ireland.

The combination of consistently scintillating play from the All Blacks and sloppy errors by Ireland made this match a mismatch from the first to the 80th minute.

Few teams have been able to thwart the All Blacks in recent years quite like Ireland, winning two of their previous three encounters.

The first, a 40-29 win at Chicago's Soldier Field in 2016, was the first victory Ireland had ever recorded over New Zealand, a winless run stretching back to their first clash back in 1905.

But after having to wait 111 years for its maiden win over the All Blacks, the Irish only had to wait two more for their second.

That 16-9 victory in Dublin was enough to convince New Zealand it had to make some significant tweaks, and head coach Steve Hansen has spent the last nine months experimenting with different combinations so as not to come unstuck once again in Japan.

While the All Blacks arguably still command more respect than any other rugby nation, those two wins have helped remove a sense of mystique and almost mythical invincibility.

But if the opening 20 minutes in Tokyo's Ajinomoto Stadium were anything to go by, Hansen had clearly got the upper hand over his counterpart and compatriot, Ireland head coach Joe Schmidt.

To have any chance of beating the All Blacks, Ireland needed to keep mistakes to a bare minimum but instead the team was making far too many; missed tackles and handling errors inside the opening period were handing New Zealand the initiative.

It wasn't long before the All Blacks made their early pressure count, as Aaron Smith darted through an opening in the Ireland defense the instant it appeared and went over for the opening try.

Yet another error, this time a sloppy knock-on from Tadhg Furlong gave New Zealand a scrum deep in Irish territory. From the resulting play, Smith once again spotted a gap to score his second try of the match.

By the time Beauden Barrett had the All Blacks' third -- capitalizing on a shuddering tackle that knocked the ball out of Johnny Sexton's hands, skillfully kicking the ball forward and gathering it up -- Ireland had a mountain to climb.

There would be one final deflating moment to come for the Irish, as a long attacking phase at the end of the first half resulted in a penalty, only for it to be reversed for dangerous play by Peter O'Mahony.

At half time, the scoreboard read: New Zealand 22-0 Ireland. It would take a superhuman effort for Ireland to turn things around from there.

For all the great teams and players the Irish have boasted over the years, it has never reached the semifinal of the Rugby World Cup, and that run wasn't looking like ending this evening.

It took just eight minutes of the second half for New Zealand to extend its lead further, as Codie Taylor went over after receiving Kieran Read's clever pop pass from the floor.

From here on out, it was just about damage control for Ireland and not allowing this to become a World Cup humiliation.

But when the All Blacks are in this kind of mood, there's little any team on the planet can do to halt the black tide.

New Zealand followed up a perfect lineout with a perfect maul, then an inch-perfect cross-field and a perfect ruck to allow Matt Todd to score. It was scintillating rugby from the All Blacks.

Ireland did eventually get on the score sheet after 70 minutes, as Robbie Henshaw made amends for his error moments before to score under the posts.

However, any hopes of a late Irish flurry were extinguished just three minutes later as George Bridge got the All Blacks' sixth try.

With just 60 seconds remaining on the clock, even with 14 players on the field after Matt Todd had received a yellow card for conceding a penalty try to Ireland, the All Blacks still managed to get their seventh try through a Barrett brothers combination -- Beauden to Jordie.

New Zealand will now play England in a week's time for a place in the World Cup final.

Hi: 75° Lo: 43°
Feels Like: 63°
More Weather
Cooler with mountain showers likely this weekend. Gusty winds will prompt a Wind Advisory in the valley on Sunday.