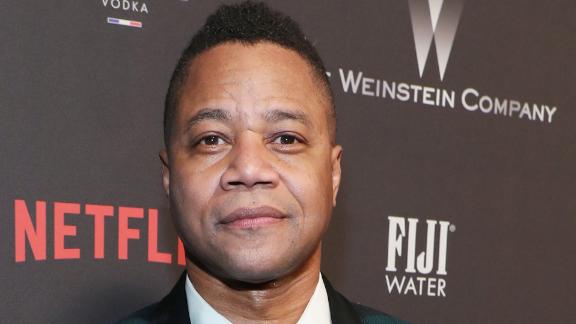 Actor Cuba Gooding Jr. has been accused of groping a woman at a Manhattan bar in June. Gooding denies the allegations.

In total, Gooding now faces three counts of forcible touching and three counts of sex abuse in the third degree. He has pleaded not guilty to all of the charges and denies any wrongdoing.

The "Jerry Maguire" star appeared in New York Supreme Court on Thursday, handcuffed and flanked by his lawyers.

The latest charges are based on allegations by a waitress at LAVO nightclub in New York, who says that Gooding "forcibly touched" her in September 2018. The other two accusations stem from alleged incidents in October 2018 at TAO Downtown and June 2019 at Magic Hour club in Midtown.

Gooding's legal team argued the new indictment doesn't specify what the exact wrongdoing is in the newest alleged count, just that "something" happened. Prosecutors then countered that they've also heard from several more women who could testify that they were allegedly groped by the actor.

The prosecution and defense also had a heated back and forth over who "leaked" a tape to TMZ showing Gooding in an incident with his second accuser, Natasha Ashworth, a waitress who worked at TAO Downtown in New York who says Gooding "pinched her buttocks" as he left the club. Prosecutors claim the video showed up online less than 24 hours after the defense viewed it.

The actor's lawyer Mark Jay Heller spoke outside the courthouse, accusing prosecutors of "maliciously prosecuting" Gooding because he is a celebrity. "Anyone who has seen this video would say that there wasn't any touching that is in appropriate," he said.

"What I see in the TAO video is at roughly 4:30 a.m., at the end of the day, Cuba is exiting the facility and with the back of his hand, his fingernail, he taps the lady in the back and turns around to give her a high five just as a salutation of goodbye -- it's not criminal conduct whatsoever."

He said that he remains confident the case will not result in any conviction.

Another attorney for Gooding, Peter Toumbekis, spoke with CNN outside court, saying the prosecution "should look into their own team" instead of blaming the defense for the video leak.

He added that Gooding is "doing as best he can" despite the circumstances.

Hi: 105° Lo: 65°
Feels Like: 73°
More Weather
Excessive Heat Warning through Thursday, but a big drop in temperatures and the potential for active weather are ahead for your weekend.