He helps seniors skydive, parasail and cross off other bucket list adventures 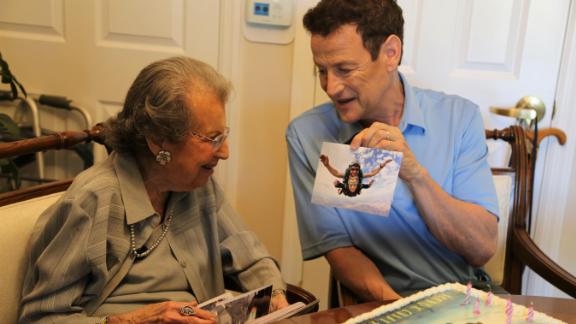 For CNN Hero Webb Weiman, helping a 90-year-old woman realize her dream of skydiving was just the beginning. He's on a mission to help seniors live life to the fullest by turning their bucket lists into reality.

Webb Weiman was 25 when his mother passed away after a decade-long battle with cancer.

After the loss, his father began to isolate himself and ceased living the vibrant life he once led.

"I'd come home and find my father alone in his dark bedroom," Weiman said. "He was once so adventurous, but the loss just caused him to retreat."

Weiman decided to intervene. He found his mother's phone book and set his father up on a date. That date eventually led to marriage.

"It gave him a new lease on life," Weiman said.

Today, his nonprofit, My Jump!, has taken nearly 50 senior citizens on adventures.

"I tell seniors to live by two rules: There are no bad bucket list wishes, and everyone should have a bucket list wish," Weiman said. "We are ... showing folks they can do incredible things."

In 2011, Weiman took his first participant skydiving on her 90th birthday. Since then, he's helped seniors from across the country cross off bucket list items like skydiving, race car driving, parasailing and flying over the Grand Canyon.

"It's seeing the spark in their eye," Weiman said. "It could be stepping off a plane, off a Goodyear blimp, off a purple Harley. It's just knowing what you've done made a difference in their life."

Weiman arranges all the details for each participant—all they need to do is show up. His group films each experience and creates videos he calls Jumpisodes for the participant to share with their family.

"This organization is all about making memories," he said. "Every time they land on the ground or get out of the racecar, it's a memory that will stay with them. And it is part of their legacy that their families will remember for many years to come."

CNN's Meghan Dunn spoke with Weiman about his work. Below is an edited version of their conversation.

CNN: Why is it important for seniors be active and find adventure?

Webb Weiman: The reality of living in isolation is out there and it's real. If you were to ask me, "Webb, is your father ever going to be living in isolation in the privacy of his own room under his roof?" -- I would say not in a million years. But it creeps up when you least expect it. Whether it's a spouse passing away, whether it's a son or a daughter who gets too busy with their own life and they're 1,000 miles away, it is increasing at an alarming rate. That's really one of the driving forces for us to keep going, for us to take those people out of isolation (and) drag the bucket list out of them.

CNN: When did you know you were on to something with this idea?

Weiman: When I joined Estelle on her 90th birthday, I made a little video, which turned out to be the start of our Jumpisodes. I went back to her senior living community to show this six-minute video. Right afterwards, this sweet, petite gal walks up to me and says, "I'd like to go racecar driving." And when I say sweet, petite—Edna Baldwin is about 4'7" and with her wig, about 5'1". Two weeks before turning 92, we got Edna behind the wheel of a 550-horsepower NASCAR-sanctioned racecar, where she did 11 laps. But what was really amazing is the fact that she needed not one, not two, but three pillows to see over the dash. And shortly after that, I thought, holy cow, we're off to the races.

CNN: What do you hope the seniors to get from these experiences?

Weiman: We want to get the message across to them that there is hope and there is a way to fulfill their dreams. Those are truly some of the most gratifying moments that I've witnessed. Seeing someone come from the darkness into the light.

I'll read a handwritten letter from a daughter saying how the event forever changed the life of their father or their grandfather. We get phone calls, emails, handwritten letters. This is a constant. And it's a huge reminder validating what we do.

Want to get involved? Check out the My Jump! website and see how to help.

To donate to My Jump! via CrowdRise, click here

Hi: 105° Lo: 66°
Feels Like: 72°
More Weather
Excessive Heat Warning through Thursday, but a big drop in temperatures and the potential for active weather are ahead for your weekend.