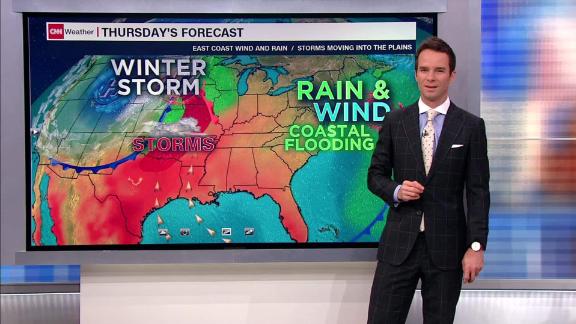 An eventful day across the US as a nor'easter parks off the coast of New England. Meanwhile, a mixed bag of severe weather will impact the Plains. Finally, fire danger looms across the Southwest. Derek Van Dam has the latest.

We're not even midway through October and a second potentially historic snowstorm is already taking shape across the north-central United States, with blizzard conditions possible.

"A significant, and potentially historic, October winter storm is on track to impact the northern Rockies, and areas of the central and northern Plains through Saturday," the National Weather Service Weather Prediction Center said Wednesday.

The storm began Wednesday, dumping up to 2 feet of snow across areas of Montana -- which already saw a historic snowstorm last month.

Tropical storm-force wind gusts over 60 mph have already been recorded near Denver, and temperatures in that region dropped more than 60 degrees Fahrenheit since Wednesday.

Also expected to see temperature drops with this storm Thursday and Friday are:

The storm will exit the Rockies Thursday and track northeast across the Plains, leaving a blanket of snow across the region.
Parts of six states are under a winter watch, warning or advisory from Colorado to Minneapolis.

The storm could shatter October snow records across much of the Dakotas as it intensifies and dumps 1 to 2 feet of snow through Friday night.
The National Weather Service office in Bismarck is referring to this event as a "potentially historic October winter storm."

Along with the snow, wind gusts of 40-50 mph or more are expected, producing possible blizzard conditions and making travel extremely dangerous.

The winds could also bring down trees and power lines, resulting in power outages and whiteout conditions on the roads. Expect treacherous travel on roadways and airport delays through the end of the week in the affected areas.

The snow will continue into Friday for portions of eastern North and South Dakota before moving into parts of Minnesota by Saturday, forecasters said.

Hi: 105° Lo: 66°
Feels Like: 75°
More Weather
Excessive Heat Warning through Thursday, but a big drop in temperatures and the potential for active weather are ahead for your weekend.