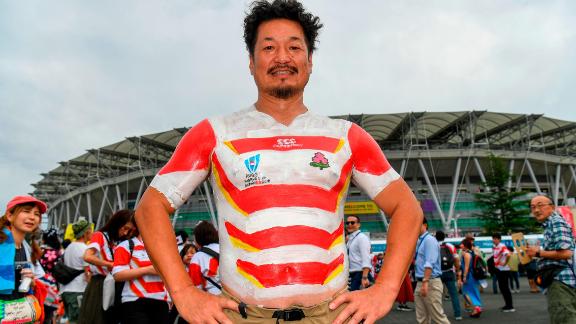 Hiroshi Moriyama, more commonly known as Bak-san, has tasked himself with wearing the jerseys of all 20 Rugby World Cup teams -- in paint.

The body is the canvas as Hiroshi "Bak-san" Moriyama's wife Rika patiently daubs gold and green paint onto her husband's torso recreating the Australian rugby shirt on his front and back.

The touch of the brush becomes more intricate and delicate as she recreates in impeccable detail the Australian team's national crest and sponsor's logo. Ninety minutes later Bak-san's upper body is covered in a convincing imitation of the Wallabies shirt.

"It is difficult for Rika to do it," Bak-san told CNN Sport anchor Alex Thomas ahead of Australia's recent match against Wales, in praise of his wife.

Having already sported the painted kits of Japan, Wales, Argentina and Samoa, Bak-san has discovered that his body is turning heads at this year's Rugby World Cup.

"There was no reaction at the beginning, but when this World Cup started, everything changed," added Bak-san

It was five years ago that Bak-san decided Japanese rugby crowds needed livening up a bit and he came up with the body paint idea.

Now with the rugby world's eyes firmly fixed on Japan, Bak-san has the perfect stage to showcase his unique commitment to the game he loves.

But it's not just with paint and art that Bak-san displays his dedication to the sport of rugby. He has tickets to 27 games and has vowed to display the colors of all 20 competing nations before the tournament's conclusion on November 2.

READ: How the Rugby World Cup has brought hope to one Japanese City

His passion for Asia's first ever Rugby World Cup typifies the enthusiasm that has engulfed Japan since the tournament kicked off.

"I think this has to be momentum for Japanese rugby to become a major sport in Japan," Bak-san said. "This is super important."

On the field, the Brave Blossoms have certainly delivered. A comprehensive 30-10 win over Russia kicked off proceedings. They then scored 16 unanswered points against Ireland to claim a historic 19-12 victory.

Through enterprising back-line play and disciplined tackling techniques employed in defense, Japan has built on its memorable triumph over the South African Springboks four years ago in the last World Cup.

Should that occur, fans will no doubt see Bak-san sporting the red and white of his country with even more fervor than he has shown. If Japan can go even further, perhaps more fans will choose to paint, rather than wear, their jerseys.

Hi: 105° Lo: 66°
Feels Like: 72°
More Weather
Excessive Heat Warning through Thursday, but a big drop in temperatures and the potential for active weather are ahead for your weekend.