He was shot and paralyzed. Now he is living his best life in a wheelchair. 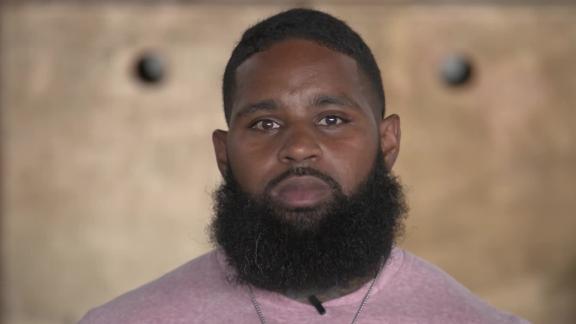 Wesley Hamilton says his life changed for the better after he was shot and paralyzed. Today, he is a community activist and adaptive athlete who founded the non-profit organization, Disabled But Not Really.

Wesley Hamilton remembers every moment of what happened on January 14, 2012. Two bullets tore into his abdomen. Panic rushed through his veins; regret flooded his mind.

"I had literally just got sole custody of my daughter. So, at this point, I wanted to be a better man," says Hamilton. "As I dropped to the ground, I was thinking, 'This is how life is gonna end, when I'm trying to do more for my little girl. Now I have no opportunity to do it.'"

When Hamilton was younger, he spent most of his time hanging out on the block, making bad choices and blending with the crowds.

But at 22, with the birth of his child Navaeh, he turned his life around. The new father got a full-time job and walked away from toxic relationships.

"I changed my lifestyle for the better to be the best parent I thought I could be," Hamilton recalls.

Two years later, outside an apartment building in Grandview, Missouri, those two gunshots changed everything.

"I started to step up to do something different. And this (being shot) was the reward I get for trying to do the right thing," says Hamilton.

At age 24, the single father with sole custody of his daughter was now paralyzed from the waist down. Emotionally, he felt hopeless and shut down.

"I was useless. I didn't think that I had the will or the strength to move forward because the life that I had always known was gone now," says Hamilton. "And this was a life I was not willing to accept."

Overweight all of his life, 5-foot-4 and 230 pounds, he saw the wheelchair as another death trap. And things got worse.

"I hated who I was," Hamilton says. "I never knew who I was. I was depressed. I was suicidal."

That's when Hamilton looked at himself through the eyes of his child and realized he needed to change.

"She was my inspiration. She didn't see a disabled man. She saw Daddy. I had this little girl that I had to take care of. So, while I'm worried about how the world sees me, I need to focus on how this little girl sees me."

Hamilton was ready to transform. He enrolled in community college and took a nutrition course. He started to eat right and took up a weightlifting regimen. Within a year, he shed 100 pounds.

He started to participate in programs he'd never dreamt of doing. He signed up for wheelchair bodybuilding competitions and got into adaptive CrossFit.

The mental fog lifted. He began to look at life from a different perspective.

"I overcame one of the biggest challenges that I faced whether I was disabled or able-bodied, and that was weight loss. I got into the gym and I've never left. My mindset changed and I'm making better choices. So, I decided to create my own opportunities that will in turn help others."

In 2015, Hamilton founded the Disabled But Not Really Foundation to instill in those with disabilities a physically unlimited mindset.

"Using fitness and nutrition, we challenge people with disabilities to push them past their mental limits to help them gain the courage they need in life," explains Hamilton.

Hamilton's impact reaches beyond those with disabilities. He also started the Change KC movement, a group of Kansas City entrepreneurs bringing about change. Homeless outreach and community clean-up are a couple of their programs.

Hamilton, now 31, says he truly believes that what paralyzed him actually breathed life into him.

"Everything happened for a reason. The man who shot me saved my life. Once I embraced my reality, I was able to free my mind and transform my life into what it is today. This transition taught me how to be fearless. It taught me how to be confident -- to be more," he says.

Wesley Hamilton has found his purpose.

Hi: 104° Lo: 66°
Feels Like: 90°
More Weather
The Heat Advisory will stay in place through Thursday evening. Cooler temperatures and the potential for showers and thunderstorms are ahead for your weekend.