A former trainer has accused NFL star Antonio Brown of rape. He denies the allegations 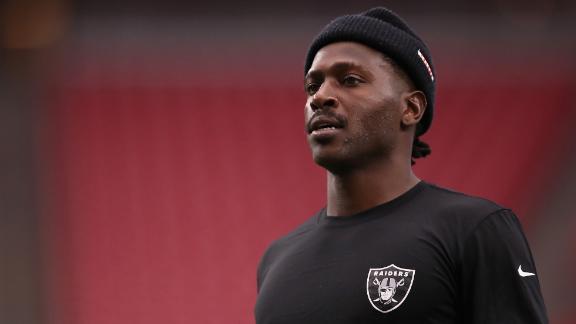 A woman who used to train New England Patriots wide receiver Antonio Brown has accused the NFL star of rape in a federal lawsuit filed in Florida. Brown denies the allegations.

A woman who used to train New England Patriots wide receiver Antonio Brown has accused the NFL star of rape in a federal lawsuit filed in Florida on Tuesday.

Britney Taylor accuses Brown, who just signed with the Patriots after being released by the Oakland Raiders, of rape and two instances of sexual assault.

Brown's attorney, Darren Heitner, posted a lengthy statement to his website, saying: "Mr. Brown denies each and every allegation in the lawsuit."

He writes that Brown and Taylor had a consensual personal relationship that began in 2018 and sexual acts were consensual.

Heitner later tweeted, "Antonio Brown will leave no stone unturned and will aggressively defend himself, including exercising all of his rights in counter suits."

Brown is in his 10th NFL season and is a four-time first-team All-Pro.

"We are aware of the civil lawsuit that was filed earlier today against Antonio Brown, as well as the response by Antonio's representatives. We take these allegations very seriously," the Patriots said in a statement late Tuesday. "Under no circumstance does this organization condone sexual violence or assault. The league has informed us that they will be investigating. We will have no further comment while that investigation takes place."

CNN does not usually name victims of sexual assault; however, Taylor is named in a federal lawsuit and provided an on the record statement via her attorney to CNN.

Taylor, who lives in Memphis, Tennessee, said it was a difficult decision to speak out.

"I have found strength in my faith, my family, and from the accounts of other survivors of sexual assault. Speaking out removes the shame that I have felt for the past year and places it on the person responsible for my rape," she said in the statement. "I will cooperate with the NFL and any other agencies; however, at this time, I respectfully request that the media please respect my privacy."

What the lawsuit alleges

Taylor alleges Brown sexually assaulted her twice in June 2017 and raped her in May 2018.

The lawsuit says that after the two sexual assaults, Taylor stopped communicating with Brown. In February and March 2018, Brown sent her messages trying to reestablish a training relationship, the lawsuit says.

Taylor agreed, and the lawsuit asserts she ended up adding other duties like running his schedule and babysitting his children.

The suit says they went out with friends to a nightclub in May 2018, and she drove Brown and another man back to Brown's Miami home. Taylor, who was staying at a hotel, went in to use the bathroom and get food, the suit says.

Brown pulled her into his bedroom where they talked, the lawsuit says. When she tried to leave, Brown raped her on his bed, it says.

The lawsuit says she told her fiancé about the rape months after it happened and that it caused difficulty in their relationship.

A leader at her church -- a former sex crimes prosecutor -- "recognized the signs of trauma Ms. Taylor was experiencing because of the sexual assault, and recommended she enter intensive therapy and retain legal counsel," the court document says.

In her complaint, filed in the Southern District of Florida, Taylor accuses Brown of sexual battery, battery, intentional infliction of emotional distress, false imprisonment and invasion of privacy.

Through his attorney, Brown says he thinks Taylor is after his money after he refused to invest in her business project.

The lawsuit says Taylor, a former gymnast, and Brown met in 2010 when they were paired as Bible study partners at the Central Michigan University chapter of the Fellowship of Christian Athletes. They remained in touch after he went to the NFL's Pittsburgh Steelers and she transferred to Louisiana State University where she continued to compete in NCAA gymnastics.

Taylor says Brown reached out to her on social media around 2013 to ask for photos of her. When she sent a photo of her face, the lawsuit states, he asked for something more revealing and she refused. Four years later, he contacted her again, she says in the lawsuit, and learned that she had a gymnastics studio. He indicated he wanted her to train him to improve his flexibility and improve his ankle strength, the suit says.

Taylor says in the lawsuit that she had no interest in Brown when he made sexual advances during trips for training in 2017. Only after an apology and assurances that he would treat her differently did she return to training him the next year, the lawsuit states.