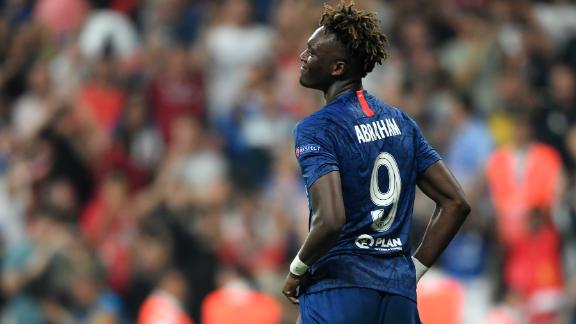 Chelsea forward Tammy Abraham speaks to Darren Lewis about the racist abuse he received following a penalty miss in the UEFA Super Cup.

To walk or not to walk? That's the question facing footballers following the racist abuse hurled at the England team in Bulgaria during a Euro 2020 qualifier as sections of the crowd in Sofia made monkey noises and Nazi salutes.

This, of course, is not an isolated event confined to one nation. In Italy, Inter Milan striker Romelu Lukaku has been the target of racism from rival fans, while in England, black players such as Raheem Sterling have spoken out against the treatment they receive from supporters and the media.

FIFA President Gianni Infantino has said the football fraternity needed to "think more broadly" on what can be done to fix this problem and called for "stronger and more effective ways to eradicate racism in football."

"Would I walk off a pitch? Yeah I would," Ivory Coast international and Crystal Palace winger Wilfried Zaha told CNN Sport at the Best of Africa Awards in London earlier this month.

"We as players we love doing our job. We get paid however much we get paid. But at the end of the day we are entertainers for people who pay to watch. But that doesn't mean we can be treated like animals."

READ: Manchester United, Tottenham and Everton: Is it time to stick or twist?

"Close the stadium down"

Before England's Euro 2020 qualifying fixtures against Czech Republic and Bulgaria, captain Harry Kane also said his team was prepared to walk off the pitch if subjected to racist abuse.

Both Fifa and Uefa have in place a three-step protocol to tackle racist abuse during games. It begins with a stadium announcement calling out the abuse and informing fans that the game will be halted if it persists. This is followed by a stoppage in play at the referee's discretion. Then, if the abuse continues after the restart, the referee has the power to abandon the game.

England's match against Bulgaria was halted twice in the first half, but was played to its full conclusion with England winning 6-0.

"Close the stadium down," former Nigeria forward Peter Odemwingie told CNN Sport. "Let the club play away games all season. That would send a strong message."

However, Odemwingie said he would not walk off the field in response to being abused.

"Not for players to decide"

UEFA's protocols have been in place since 2013 but no game has yet been canceled under these guidelines. But should so much responsibility rest on the players' shoulders?

Aluko added: "Why racism is not being taken so seriously I'm not too sure. It's not down to the players, its down to the authorities to make sure that everybody is clear that if [racist abuse] happens, this is what happens."

"Everyone is talking about football being a tool to change or stop racism," Rio Ferdinand, the former England and Manchester United defender, told CNN Sport.

"I think that is very naive to think that is a possibility because its a lot deeper than that. It can play a part in jogging people's minds to think, 'maybe I shouldn't say this or say that.' But education is at the key and the heart of it all."

Lukaku will be playing for Inter at Sassuolo, Sterling and Zaha will share a pitch in Manchester and Sofia will again stage a match when Levski — whose midfield is anchored by the Senegalese Khaly Thiam — welcomes Arda Kardzhali to the Giergi Asparuhiv stadium.

Racism in football will continue to exist as long as racism in wider society exists but for some, a line has been drawn.