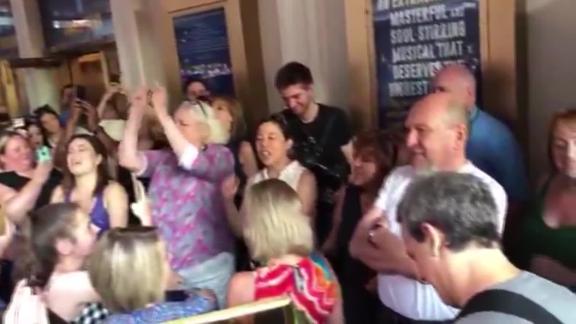 After a widespread power outage in New York, cast members from Broadway musical "Come From Away" held an impromptu performance outside their darkened theater.

A city known for its bright lights went dark on Saturday night.

At its peak, the New York City blackout shut off power to about 73,000 customers in Midtown Manhattan and the Upper West Side, officials with the utility company Con Edison said. On a Saturday night, that meant many of New York's top entertainment and tourist attractions were stopped in their tracks.

Some of the iconic billboards that on any other day would light up Times Square were totally blank. People were trapped in subway cars. Major theater productions were brought to a halt.

At Madison Square Garden, the lights went out just as Jennifer Lopez had begun her concert, the singer said.

The show could not go on and instead had to be evacuated for safety, with Lopez promising to reschedule.

But where there were cancellations and confusion, the city came together to make the most of it.

Citizens were in the middle of intersections directing traffic in place of disabled lights. One woman, 23-year-old Lake Escobosa, spent nearly an hour directing traffic, a skill she learned from her former police officer father.

"I know how tricky it is when it comes to that intersection and I just saw in my mind car accidents people getting hit, people screaming," she said. "So I felt like I should have just tried."

And as the neon signs went out on Broadway, at least one cast, that of the show "Come From Away," met an audience outside for an impromptu performance. Nearly two dozen shows were canceled due to the blackout, according to The Broadway League's Twitter, and patrons will have to be refunded for their tickets.

Choir singers who were scheduled to perform at Carnegie Hall also brought their music to the streets.

One Twitter user recorded the singing projecting from the streets below to the highrises above, with crowds of passersby, who might not otherwise have been able to, stopping to enjoy the melodies.

Hi: 53° Lo: 44°
Feels Like: 43°
More Weather
Wet weather for your morning commute but drying out by tonight. Highs near 60 by Friday. The next system doesn't get here until late Saturday.