'I was prepared for this': Daniel Ricciardo reiterates commitment to Renault 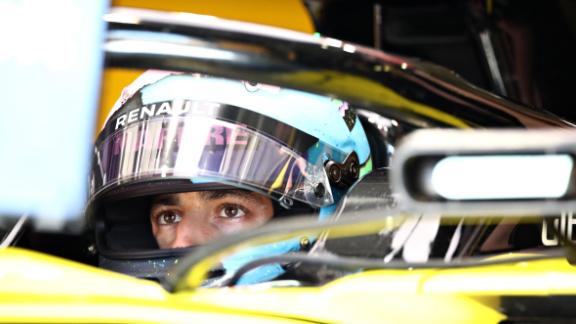 Renault driver Daniel Ricciardo speaks about the upcoming Silverstone Grand Prix and his Formula One career to date.

Ahead of the British Grand Prix this weekend, Daniel Ricciardo has reiterated his happiness at Renualt and rebuffed any links connecting him with a move to Ferrari.

The Australian is enduring a tough Formula One season in which he currently sits 10th in the drivers' standings -- he's mustered just 16 points, the same as teammate Nico Hulkenberg.

But Ricciardo insists that a year on from his big-money move from Red Bull, he has no regrets about switiching to Renault.

"I lot has happened. I feel good," Ricciardo told CNN Sport's Amanda Davies. "Obviously, the results aren't what I want but I also didn't expect the world come 2019. I knew there was going to be a bit of a struggle and a rebuilding phase so we're certainly going through that and I want it to happen overnight, but I know it's not going to.

"I'm not down or discouraged. I was prepared for this."

Since making his debut in Formula One in 2011, Ricciardo has had mixed success.

He's won seven grand prixs and finished third in the drivers' championship in 2014 and 2016.

But Ricciardo, who turned 30 on July 1, admits he hasn't achieved everything he had wanted to in F1 before entering his fourth decade.

"I wanted a world title and believed I could have had one by 30," reflected Ricciardo said. "But is there some satisfaction in my heart? Absolutely. I have achieved some race wins, I've done everything else other than win a world title. If it ended today, half my heart would feel a little bit torn but half of it would be grateful and fulfilled."

READ: Phoenix from the flames: MotoE takes to the circuit just months after fire

With Sebastien Vettel seemingly increasingly more vocal about his frustrations at Ferrari, Ricciardo has been linked to a move to the Italian team, although the Australian isn't actually sure where those stories are coming from.

"I'll get sent articles and I don't really know where it's come from, but I'll always just draw the positives from it," said Ricciardo.

"It's nice that I'm being talked about in a positive way and that's it."

A place that means a lot

While Australia's one day cricket team may be leaving the UK downbeat following their loss to England in the World Cup semifinals, Ricciardo will be flying the flag for his country at Silverstone in Sunday's race.

Having made his F1 debut at the British track in 2011, the British GP has been a place that Ricciardo has always felt at home.

"I've always liked Silverstone as an event and as an atmosphere," Ricciardo admits.

"It does bring in that kind of British festival feel and everyone's always out here, no matter what the weather is. I feel the attendance doesn't waver one bit.

"It was one of the first European tracks I came to. And so many F1 teams are based around here too so there is something about this area of the world that breeds F1."

Hi: 103° Lo: 66°
Feels Like: 97°
More Weather
The Heat Advisory will stay in place through Thursday evening. Cooler temperatures and the potential for showers and thunderstorms are ahead for your weekend.