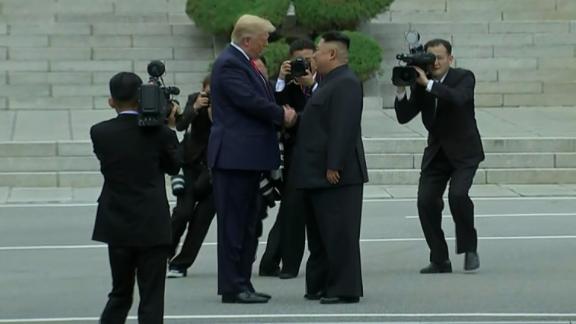 Making history isn't always a good thing, especially when it involves crossing into an authoritarian regime's territory. And yet, President Donald Trump did just that, taking 20 steps into North Korea on Sunday -- the first sitting American leader to do so.

But whether those were 20 steps toward long-lasting peace initiatives, or 20 steps toward empowering and legitimizing the hermit kingdom, remains to be seen. The history of nonproliferation attempts with North Korea is marked by numerous attempts at denuclearization -- and just as many failures.

And while Trump and Kim Jong Un reportedly informed their teams that it was time to resume talks once again after meeting, something else is also clear: Kim just gained invaluable insight into Trump's bar for success.

Trump: satisfied with the status quo

While the Trump administration itself defined its long-term goal for negotiations with North Korea as denuclearization, Trump's foray onto North Korean soil signaled to Kim that the status quo -- which he repeatedly said was better than the war he argued President Barack Obama was on the brink of starting -- is good enough. Laying aside his own escalatory rhetoric on North Korea, Trump repeatedly said that the current security situation on the Korean Peninsula and in the region is better than it's been before -- in large part due to a lull in North Korean long-range missile tests and nuclear tests.

Less missile testing is certainly important for near-term security, but it was not the administration's original goal. The President has moved the very goal posts he set -- yet again. This signals to Kim that Trump may talk a big game, but he will settle for a lot less.

In short, Trump's steps in North Korea may be viewed by Kim as a step backward for Trump's own previously stated nonproliferation agenda.

Out of sight, but not out of mind

Since Kim has reason to think that denuclearization is not a prerequisite to peace, it is likely that he will continue building his nuclear arsenal, along with other conventional and nonconventional capabilities -- especially if the North Korean dictator can keep these activities out of Trump's line of vision.

However, while they may be out of sight, they should not be out of mind for the many American officials engaged in US national security matters. North Korea's illicit activities will likely continue to affect countries beyond the Korean Peninsula, including our own.

On Sunday, Trump engaged in a "handshake for peace" with Kim, but North Korea is still allegedly attacking us -- particularly in cyberspace, where the Department of Homeland Security and FBI reported a likely North Korean malware attack just last month. And yet Trump didn't mention these attacks publicly.

Of course, we don't know whether they were raised in the closed door meeting he had with Kim after they shook hands, but it seems unlikely. And the truth is we don't even know if he was prepped for that meeting on North Korea's latest cyber efforts. If the meeting was spontaneous, as Trump's tweet would have us believe, prep time for his bilateral meeting with Kim was likely sparse at best.

All that said, if the status quo -- replete with alleged cyberattacks -- was enough to get Trump to step into North Korea, then Kim has little reason to stop his attacks on American soil.

On the conventional military front, Trump pointed to the lack of weapons at the Korean Demilitarized Zone as another symbol of peace on the peninsula. But North Korea still maintains one of the largest conventional armies in the world, with over 1 million members in its armed forces. So, while Kim's military might may not have been on display at the DMZ, North Korea's conventional military capabilities remain significant.

And North Korea's military capabilities affect countries with which Trump is personally engaged in a war of words -- and potentially direct military confrontation in the not so distant future. Experts have assessed that Iran was able to grow its ballistic missile arsenal by purchasing missiles, components and technology from North Korea and China, and the UN is investigating North Korean arms dealers in Iran.

North Korea has also long been suspected of providing conventional military support to Syria, and despite Trump's warm words about his achievements with Kim, we should expect Kim to continue his illicit arms activities in theaters that directly impact US interests.

While President Trump said that the dangers posed by Kim have now gone away, significant dangers remain. And whether the security situation that Trump says he's created actually holds up -- one in which long-range missiles aren't flying and nuclear tests aren't happening -- is really up to Kim. The North Korean leader has given the administration an end of year deadline for giving him what he wants -- namely sanctions relief. If we don't play ball, it is probable that North Korea will break their freeze on tests.

With Trump's newly defined characterization of success -- one which hinges on these tests not happening -- it is possible that phased sanctions relief, something which he's said he won't do, may in fact be on the table. And with Trump's Sunday foray into his country, Kim probably thinks he's closer to getting what he wanted all along: a normalized, nuclear North Korea that has access to cash, countries and credibility.

Hi: 51° Lo: 38°
Feels Like: 39°
More Weather
The first wave of rain, snow and wind has moved over California, but many more chances for rain, snow and gusty wind are in our short term and long term forecast. After a relatively quiet evening, we can expect more rain and snow starting early Thursday morning.

Tree falls on car in Butte Creek Canyon near Chico

2 people arrested after an armed shoplift in Chico

Encampments still set up at Chico 'triangle' despite 72-hour notice