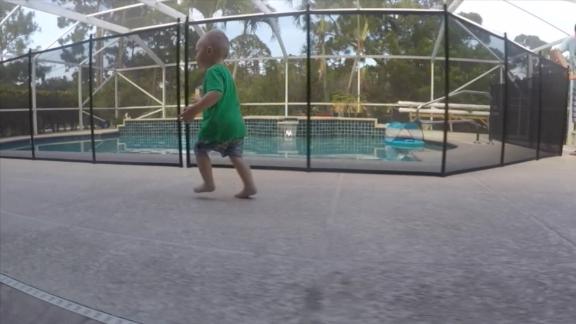 Albert Passavanti dove over a four-feet fence to rescue his one-year-old son Rocco after he fell in the pool.

A parent's protective instincts are no joke.

Albert Passavanti and his family were lounging by the pool in Palm Beach County, Florida on a sunny Sunday when something terrifying happened.

As Passavanti's toddler son chased an inflatable ball, he fell into the pool. The 1.5-year-old doesn't know how to swim.

When Passavanti saw his son was in danger, he jumped to his feet, bolted over a 4-foot fence and dove into the water.

The father's quick thinking and reflexes saved his son's life.

"The second you see it; you get Superman strength and just have to go for it, whatever you got to do," he told CNN affiliate WPTV. "It didn't even cross my mind to go around. It was point A to point B."

There was a fence around one side of the pool, but it wasn't entirely baby proof.

In a Facebook post with a video showing the dive, Passavanti warned, "Baby gates only work when you close them."

The AAP urges parents to be within an arm's length when young children are around or in water. Parents should avoid becoming distracted by other activities such as cellphone use or drinking alcohol. Caregivers should also consider learning CPR, teaching their children water-safety skills, and putting life jackets on their kids, the AAP says.