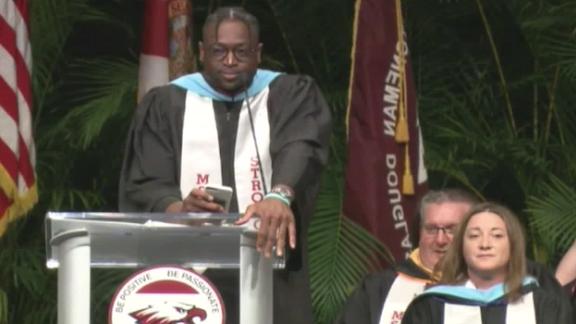 It's been over a year since 17 people were killed in the Valentine's Day massacre at the high school in Parkland, Florida.

Wade was touched by the story of one of the victims, Joaquin Oliver, whose parents buried him in a Miami jersey emblazoned with Wade's number 3. Wade dedicated the rest of the 2018 season to Joaquin and etched the teen's name on his sneakers. Wade has been a big part of the MSD community since then, making a surprise visit to the school a month after the shooting.

"My life is bigger than basketball, and that's why I had to come to Marjory Stoneman Douglas to be whatever was needed of me," Wade said during his commencement speech Sunday. "I wanted to be that because we're stronger together."

Wade thanked everyone in the Parkland community for reminding him of his purpose.

"I'll try to continue to be a leader and a fighter that Joaquin Oliver thought I was," he said, adding that he loved that the students became advocates, faces and voices of kids all around the world. "I'm so proud to say the words 'MSD Strong.'"

At the end of his speech, Wade cited a mantra from one of his favorite movies, "Red Tails."

"Everything's a challenge," the graduates yelled back.

"Through adversity," he said.

"To the stars!" they yelled.

"To the last man, the last minute, to the last second," Wade said looking to the audience.

"We fight!" the students yelled back.

Hi: 73° Lo: 42°
Feels Like: 70°
More Weather
The rest of the week will see nice weather. Wet weather returns for your weekend and into next week with the chance for moderate to heavy snow in the mountains.