Mueller's message: Congress, it's your turn 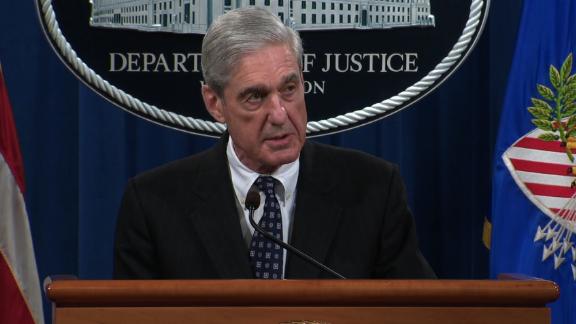 Special counsel Robert Mueller delivers his first public remarks about the Russia investigation at the Department of Justice.

When Robert Mueller finally broke his two-year-long silence Wednesday, he sent an unmistakable message to Congress: It's your turn.

Mueller stressed at the outset that obstruction of justice is a serious offense -- and not merely some petty "process crime," as some Trump supporters have claimed -- because it "strikes at the core of the government's effort to find the truth and hold wrongdoers accountable." Prosecutors and law enforcement officers rely on the integrity of our criminal justice system every day, and Mueller did an important public service by rebuking those who would simply brush aside Donald Trump's obstructive conduct as somehow unimportant.

Mueller then set the record straight on two key points. First, he made clear that the longstanding Department of Justice policy against indicting a sitting president effectively handcuffed him, contrary to the impression created by Attorney General William Barr.

Second, Mueller firmly refuted Trump's claim that the investigation resulted in "total exoneration." To the contrary, as Mueller stated, "If we had confidence that the President clearly did not commit a crime, we would have said that."

Finally, Mueller all but walked his report up Capitol Hill and onto the House floor. He reminded us that we have "a process other than the criminal justice system to formally accuse a sitting president of wrongdoing." That process, of course, is impeachment.

Two whole-ball-of-wax questions emerge from Mueller's remarks. One, will Speaker Nancy Pelosi, House Judiciary Committee Chairman Jerry Nadler and other House leaders stop trying to appease various factions within the Democratic caucus and unify behind an impeachment strategy? And two, will any Republicans join Rep. Justin Amash in concluding that Trump obstructed justice, Barr distorted Mueller's findings, and impeachment is necessary and appropriate?

In a sense, Mueller didn't say much that was new. He reiterated he would not expand on the factual findings in his report or engage in hypotheticals. But, make no mistake, Mueller had a compelling reason for breaking his silence and speaking publicly for the first time in two years. Mueller took the podium to let Congress know: I've done all I can do under the Constitution -- now it's your turn.

Paul (North Carolina): Will opening impeachment proceedings give the House more power to request documents from the administration?

Yes. Article I of the Constitution grants Congress "all legislative powers" and the "sole power of impeachment." Thus far, Congress has relied only on the legislative authority but not the impeachment power to support its subpoenas on the executive branch.

Last week, two federal courts upheld congressional subpoenas, ruling that Congress has broad legislative authority and accompanying power to issue subpoenas related to potential legislation. (In both cases, Congress subpoenaed private firms for Trump's financial records, and the White House objected.) However, a court can strike down a congressional subpoena that does not support some legitimate legislative purpose.

In cases where the legislative purpose is debatable or nonexistent, it would be helpful to have an impeachment inquiry, which would give Congress a second and alternative basis to enforce its subpoenas. For example, Congress might subpoena testimony or evidence on obstruction of justice by Trump or others. In that case, the subpoenas likely would have no relevance to potential legislation -- but they still would stand in court if relevant to impeachment proceedings.

Of course, the politics matter here. While an impeachment inquiry would bolster Congress' subpoena power, House leaders surely would consider the larger political landscape in making an impeachment decision.

Donna (Pennsylvania): To what extent are the President's attempts to thwart all congressional subpoenas on matters of national concern obstructions of justice?

While it might be obstructionist in the everyday, nonlegal sense for Trump to take a blanket position opposing all congressional subpoenas, this type of stonewalling is not criminal obstruction of justice in itself. Any person or entity is entitled to raise a legal objection in court to a subpoena. Even if Trump's objections ultimately lack merit and even if the courts reject his legal positions -- as two courts did last week in rulings relating to Trump's financial records -- it is not a crime to make weak or frivolous legal arguments in court. (If it were, plenty of lawyers would be behind bars right now.)

If Trump or others refuse to comply with a lawful court order upholding a congressional subpoena, however, they could end up in criminal territory. It is a federal crime to disobey a lawful writ or order from a court. So if, for example, a court upholds a congressional subpoena seeking Trump's tax returns, and the executive branch refuses to comply, then the individuals responsible for that refusal could be charged with criminal contempt and face potential imprisonment or fines.

Shaun (Florida): If Trump loses in the 2020 election, is it possible and likely that he will be prosecuted on obstruction or other charges?

Nonetheless, it is difficult to predict the likelihood of Trump being indicted if he loses the 2020 election. The Mueller report lays out a compelling case that Trump obstructed justice. I am one of more than 900 former federal prosecutors who signed a letter arguing that Trump would have been indicted for obstruction if not for his status as President. And the Justice Department stated on record in federal court that Michael Cohen committed campaign finance crimes "in coordination with and at the direction of" Trump. (Trump has denied telling Cohen to break the law.)

If Trump loses in 2020, the primary impediment to a criminal charge would be political rather than legal. A new president and a new Justice Department might not want to begin a term with a prosecution that likely would be one of the most politically charged and attention-grabbing moves this country has ever seen.

A new president might even go a step further and follow the lead of President Gerald Ford who, shortly after taking office in 1974, pardoned his predecessor, Richard Nixon, in part to end "years of bitter controversy and divisive national debate." Of course, Nixon and Ford were both Republicans, while a successor to Trump in 2020 almost certainly would be a Democrat, barring a highly unlikely successful Republican primary challenge. Either way, a new president from either party would face a daunting political dilemma.

Kenneth (Maryland): Article II Section 2 of the Constitution provides that the president "shall have Power to grant Reprieves and Pardons for Offenses against the United States, except in Cases of Impeachment." If the Democrats initiated impeachment proceedings against Trump, could Trump still issue pardons?

Yes. The president can issue pardons in criminal cases right up until the moment he leaves office. In fact, many presidents have issued pardons in their final days and hours in office, likely because pardons tend to be politically unpopular.

While the president has the constitutional power to pardon federal crimes -- "offenses against the United States" -- he cannot issue pardons for impeachment. So if the president or any other federal official is impeached by the House and then convicted by the Senate, there is nothing the president (or anyone else) can do to reverse it. There is no way to appeal or undo an impeachment.

Donna (Virginia): When subpoena disputes between Congress and the executive branch hit the courts, do judges consider whether each side has been cooperative and tried to work things out?

Yes. Generally, judges try to encourage parties in a legal dispute to work things out between themselves, if at all possible. I once prosecuted a case against 20-plus defendants in which the judge repeatedly ordered me to sit in his chambers with the entire group of defense attorneys in an effort to reach plea agreements and avoid trial (it worked -- eventually).

3 questions to watch for next week

1) Will the House open a formal impeachment inquiry in the wake of Mueller's remarks?

2) Will the House continue to seek Mueller's live testimony given his stated desire not to testify?

3) Will the House take steps to compel testimony from former White House counsel Don McGahn and potentially other relevant witnesses on obstruction of justice?

Hi: 74° Lo: 42°
Feels Like: 41°
More Weather
Areas of fog are possible to start your Tuesday, but we'll end up sunny, warmer, and have gusty north winds Tuesday afternoon. Winds will diminish through the day on Wednesday, and we'll stay very warm. Dry and warm conditions will persist through this weekend, but wet and cooler weather is projected to return next week.