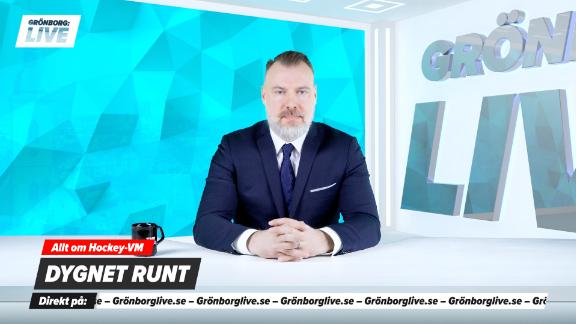 Sweden ice hockey coach Rikard Grönborg is doubling up as a virtual sports anchor during this year's world championships.

There's a new face in the world of broadcasting, and this round-the-clock anchor is busy holding down two jobs at the same time.

During this year's Ice Hockey World Championships, Rikard Grönborg is doubling up as coach of the Swedish national team and a 24/7 news reporter.

He won't, however, be stepping anywhere near the newsroom cameras during the tournament. That happened several weeks ago when Grönborg posed to become the world's first virtual sports anchor reporting on all the action unfolding in Slovakia.

In November last year, China's state news agency debuted the first ever 24/7 virtual anchor, but Grönborg's digital clone is the first with a sole focus on sport.

From the first game on May 10 right up until the final on May 26, the Swedish language live stream will deliver 408 hours of news, interviews, and analysis around the world championships to fans back home.

"We spent hours filming myself in different positions and situations," Grönborg, who led Sweden to back-to-back titles in 2017 and 2018, tells CNN Sport of the painstaking process to create his virtual duplicate.

"Then we recorded my voice saying all kinds of different, very, very weird sentences that didn't really make sense when I recorded it ... The filming was four or five hours and I think recording of my voice saying different sentences was at least three plus hours.

"I think the end product is pretty good and it's obviously built an interest with the fans out there that want to follow our team in the world championships."

On top of having Grönborg front the news stream, the concept appeals to fans by drawing upon 20 years of ice hockey data to deliver stats and predict results.

Despite suffering defeats by the Czech Republic and Russia -- the former being Sweden's first defeat for 17 games in the world championships -- Grönborg's side defeated Italy, Norway, Austria, Switzerland, and Latvia to set up a quarterfinal clash against Finland.

The coach is confident his team can go the distance for a third consecutive tournament.

"Obviously we're still going for gold," he says. "We've been having great success over the last couple of years doing that. I think we definitely have a team among other great hockey nations here. We have a very good shot of going all the way."

Recent years have seen a surge in the use of artificial intelligence, with the media industry just one of many examples of AI being deployed in the place of humans. A 2019 study by the Brookings Institute estimated that 25 percent of jobs in the US are at high risk of being replaced by AI and automation.

On the website willrobotostakemyjob.com -- which evaluates the likelihood of professions being replaced by AI and robots -- "reporters and correspondents" returns an 11 percent chance of losing its human touch, while "radio and television announcers" gives 10 percent.

So has the virtual Rikard Grönborg got CNN's sports anchors fearing for their future?

"In my experience, viewers often want a personality they can trust to bring them their sports news or sports coverage," says CNN World Sport anchor Alex Thomas, "someone genuine and knowledgeable and somebody they can relate to.

"I think, for now, that's still a human rather than a virtual anchor.

"I have always worked with the philosophy that it's not about me, it's about the consumer experience. So, if in the future a virtual anchor or AI robot is better at presenting the sport than an actual person, then I wouldn't have a problem with it."

The immediate future for anchors and reporters seems safe, then.

"At the moment I don't see such developments as a threat to most TV anchors, because there is much more to sports presenting than simply reading the results," Neil Thurman, a professor of communication at LMU Munich, tells CNN.

"Virtual anchors also face the 'uncanny valley' effect -- whereby viewers are uncomfortable with virtual presenters that are almost, but not quite, human.

"I see more potential for automation in sports-news videos in so-called text-to-video technology. This technology can produce short news videos from text stories, automatically choosing clips and pictures to match the story, which is told using captions or a computer-generated voice. Captions in particular avoid the 'uncanny valley' effect."