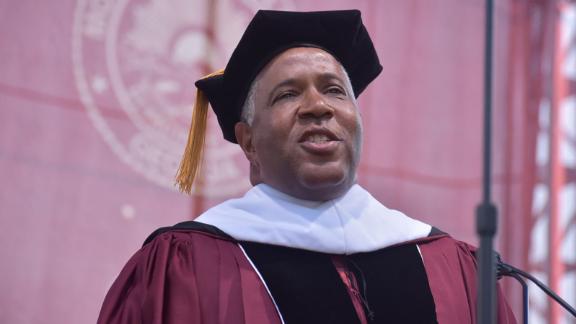 Robert F. Smith announced that he'd be giving 396 college seniors the gift of a lifetime during his commencement speech at Morehouse College.

While considering the incredible generosity of billionaire philanthropist Robert F. Smith, who announced during a commencement speech that he'd be creating a program to pay off the student loans for every student in Morehouse College's class of 2019, you should also think about this: according to statistics from the Department of Education, 99% of borrowers have been rejected by a federal student loan forgiveness program designed to spur public service and reduce the nation's mountain of student loan debt.

The contrast couldn't be starker: a member of the much criticized 1% has pledged to provide 400 students with the best graduation present ever, even as the federal government and student loan creditors have found a thousand different ways to undermine even seemingly well-intentioned programs.

I must first praise Smith, even though I get that the $40 million his gift will cost his family is but a drop in the bucket of his estimated $4.5 billion of personal wealth. I must also point out that a lone billionaire -- or a gaggle of billionaires -- will never be enough to solve our growing student loan debt crisis. Smith is an extremely successful black man who understands the importance of keeping the American dream alive -- but he doesn't pretend that all is well. As he told The Washington Post a few years ago, he gets stopped by police several times a year as he drives himself to an airport in Texas -- to board a private plane he owns.

"You shouldn't have to be fearful of your life," he told The Post. "You should be able to drive to the airport and not be stopped three to seven times a year."

Smith was also the second-largest donor to the Smithsonian's National Museum of African American History and Culture, behind Oprah Winfrey. He's done that, and much, much more, mostly purposefully away from the spotlight after emerging from a working-class family headed by parents who were educators. I don't know his faith background, but his refusal to brag, pat himself on the back or forget about or abuse his power and influence to belittle those less fortunate are the kinds of qualities the Christian Bible encourages.

All of this should make us think about how different Smith is from President Donald Trump, given that while Smith has been finding ways to make things easier for students saddled with student loan debt, the Trump administration has been busy making their journeys harder. Though Smith has long shied away from the spotlight, with one speech, he pulled Trump's hypocrisy to center stage like no one has in recent memory, even though Democratic presidential candidates have also rightly made this a central focus of their campaigns.

The Department of Education, led by billionaire Betsy Devos, seems uninterested in dealing effectively with the student loan crisis that disproportionately affects black and brown and poor and working-class students. Even the Trump administration's decision to roll back enforcement efforts by the consumer watchdog agency that is the brainchild of Sen. Elizabeth Warren has reoriented the balance of power back in the favor of corporations over individual students, and other everyday Americans (which was stillway out of whack even though the agency had grown in strength during the Obama era).

But just as Smith's gesture is not the answer to the student loan crisis, Trump isn't the only reason we found ourselves in this situation. Bipartisan decisions by Congress members who are too beholden to lobbyists; too many Americans falsely believing we live in a merit-based society in which hard work always pays off and needing a "handout" is evidence of a person's laziness or refusal to take sensible risks; and a higher education system that has become as much about status signaling as society building have all contributed to our current mess. A K-12 education system that remains too racially segregated and our reliance on tests and traditions that essentially reserve most spots in top institutions for the already privileged and have sent college costs at most institutions skyrocketing have as well.

That's why we should celebrate what Smith did, not just for those 400 Morehouse students, but for the rest of us. He laid bare how we got here -- and how far away we are from righting the ship.

Hi: 71° Lo: 44°
Feels Like: 68°
More Weather
Throw on a jacket and grab those sunglasses as you're heading out the door Monday morning. We have brisk temperatures to start the day, but will end up sunny and warm for your Monday afternoon. We'll get even warmer mid week. A modest drop in temperatures and the potential for showers will finally return for your weekend.