Forget A to B, electric cars can now get you from London to Paris 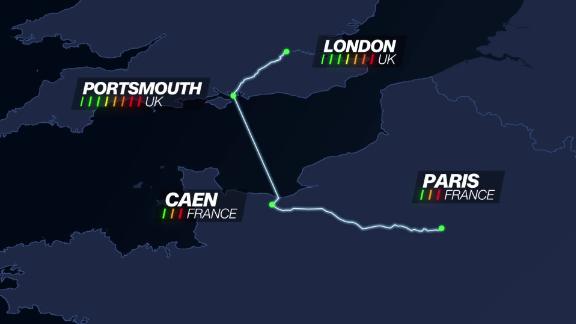 Is it possible to drive an electric car from London to Paris on a single battery charge? CNN Supercharged's Nicki Shields put it to the test.

In the past, when people thought about electric cars they probably envisaged being stranded at the side of the road, an empty battery and not a charging point in sight.

The thought of even getting from home to work and back was worrying enough, and the idea of making it from one country to another was, frankly, absurd.

Fast forward to 2019 and electric vehicles have come a long way. Gone are the short battery ranges and sporadic charging stations -- there are now full charges which last for hundreds of kilometers and a rapidly-growing network of chargers.

Perceptions about what electric cars can be have changed too, thanks in part to Formula E's advent which has shown they can be fast and fun and not like old milk floats.

READ: This is what supercars will look like in 2035

And for the first time in its 42-year history, British magazine What Car? chose an electric vehicle as its Car of the Year. But if you're thinking Tesla's latest model or BMW's new electric i8, think something more understated.

Kia's e-Niro is the car for now, according to What Car? Marketed as a spacious, affordable family car, the e-Niro boasts a range of 282 miles (454 kilometers) in a single charge and is completely emission free.

This improved technology has seen an increase in battery life across the EV market, with most cars now comfortably exceeding the 150-mile range, more than enough for the average road user to complete several journeys.

Some of the EV market's most recent models such as the BMW i3 boast a range of 153 miles, the Nissan Leaf almost 200 and Hyundai's Kona Electric 292.

"It's the first electric car that can fit into most people's lifestyles, and the reason for that is its range and its price," What Car? deputy editor Darren Moss tells CNN of the reasoning behind its award for the e-Niro.

In the motoring world, that fear of being stuck at the side of a motorway with an empty electric car actually has a name: range anxiety.

This has been the primary factor behind the public's reluctance to ditch their combustion cars for an electric vehicle and explains in part why the transition has been so slow and gradual.

And those fears are not unfounded. Take the Mitsubishi i-MiEV, the world's first mass-produced, highway-capable electric car that was released in 2009.

"Now of course, you don't have that problem in a petrol or a diesel car because you can just pull into a petrol station," Moss says. "But I think these days electric cars have come on to the point where the range is pretty good.

"So this car, the e-Niro will do 407km in the real world between charges, about 253 miles and the majority of journeys, that's going to be absolutely fine.

"The chances are, if you're doing that kind of journey, you're going to need to stop, in which case you'll be doing it somewhere like a motorway service station, where there are fast chargers which can get you back up to 80% in about 75 minutes, so that's enough time for a coffee and a chat."

So, in the name of green travel, we at CNN Supercharged willingly decided to give ourselves a taste of range anxiety and put the e-Niro to the test and attempt to drive from London to the Paris ePrix on a single charge.

Our journey starts in Soho, in the heart of London.

To make sure we complete the journey, we drive in the recommended Eco+ mode which limits the car's top speed to 60mph and disables energy consuming systems such as heating, ventilation and air conditioning.

Though if you do start to feel the chill and you are traveling alone -- or aren't particularly friends with your passenger -- you can choose to heat only the driver's side of the car.

The first leg of our journey takes us 75 miles to Portsmouth on England's south coast, where we'll cross the English Channel before eventually arriving in the French city of Caen.

Upon leaving London, our worst fears are realized almost immediately, as we take a wrong turn, leaving the motorway and ending up on a more scenic route which no doubt drains some precious miles from the battery.

Fortunately there are no further hiccups and we arrive in Portsmouth with a healthy amount of battery life remaining.

Despite knowing we should make it comfortably with miles to spare, range anxiety inevitably kicks in as our eyes flick to and from the dashboard, checking the charge at regular intervals.

Once we land in Caen, the longest stretch of the journey lies ahead; a five-hour, 150-mile drive to the iconic Invalides in the heart of Paris, where the eighth leg of the Formula E calendar takes place.

Sadly, the miserable British weather has followed us across the Channel and while the gloom hinders our view of the rolling French countryside, it at least offers us the chance to test more of the car's functions.

Sensors detect when rainfall on the windshield gets heavier and automatically turn on the wipers, while the heated seats and steering wheel provide a welcome bubble from the outside elements.

It's widely acknowledged that the next big step in the car industry will be autonomous vehicles. The e-Niro has cameras providing lane assistance which forcibly pull you back into the middle of your lane if you stray and the cruise control adjusts its speed, accelerating and decelerating based on the distance to the car in front of you.

All this means that technically you can take your feet off the pedals and hands off the wheel (though an alarming beeping sound quickly warns against it).

Approaching Paris, the Eiffel Tower provides a welcome sight and signals that our journey is coming to an end.

We pull into the gardens of Les Invalides, meters from where the weekend's race will start and check the dashboard one last time -- we made it and with 66 miles to spare.

Range anxiety? Nothing to worry about.