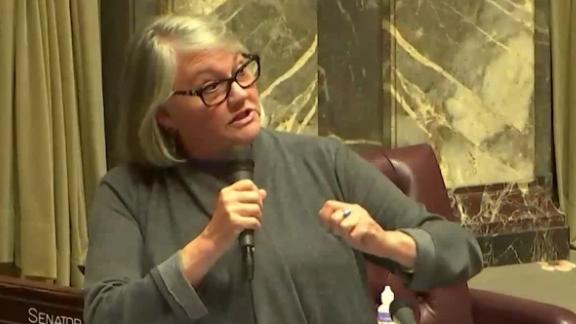 A Washington state senator has drawn the ire of nurses after remarks she made suggesting that nurses in smaller hospitals "probably play cards for a considerable amount of the day."

North Korean leader Kim Jong Un is in Vladivostok, Russia, for his first meeting with Russian President Vladimir Putin. Keep up with the latest on this important summit. And here's what else you need to know to Get Up to Speed and Out the Door. (You can also get "5 Things You Need to Know Today" delivered to your inbox daily. Sign up here.)

President Trump has made it clear to House Democrats that they won't get an iota of cooperation from his administration as their various investigations of the Trump presidency move forward. Trump promised yesterday to fight "all the subpoenas," so the Dems are prepping plans to hold officials in contempt. But they're also gearing up for the likely legal fights ahead, as taking the administration to court may be their only recourse. That could tie up the Democrats' probes in legal knots for months or years, which would be just fine with the President, who views all-out defiance of their requests as a winning political strategy.

Two of the men who blew themselves up in the Easter Sunday attacks in Sri Lanka were members of a wealthy and prominent family. Two sources told CNN that Imsath Ahmed Ibrahim and Ilham Ahmed Ibrahim were among the band of people who attacked churches and hotels in the island nation, in violence that killed at least 359 people. And their father, the founder of the largest spice exporter in the country, is now being held by police on suspicion of helping his sons with the attacks. The fact that such wealthy and well-connected people were a part of the attacks was a "worrying factor," Sri Lanka's defense minister said. Click here for the latest in the investigation and to read more about the victims of the bombings.

The 1998 dragging death of James Byrd Jr. was so shocking and horrific that it jolted Congress into passing hate crime legislation. Now, one of the three men convicted in the murder has been executed. John William King was executed by injection last night in a Texas prison. He's the second person to die for the crime; Lawrence Russell Brewer was executed in 2011. A third man convicted in the killing is serving a life sentence. Byrd's sister said she felt "no sense of relief" watching King die but called it a "just punishment," noting he'd never shown any remorse.

Facebook says it's expecting massive fines from federal regulators as it seeks to put all of its privacy scandals behind it. The fines from the Federal Trade commission could range from $3 billion to $5 billion, the social media giant said. That's really bad news, so, of course, Wall Street's reaction to it was ... positive. Facebook shares jumped up 10% after the announcement. Facebook's first quarter profit dipped, too, but analysts expected that because the company is investing heavily in infrastructure and other efforts to protect its platform from abuse, plus incurring hefty legal expenses.

Measles cases in the US hit the highest number on record since the disease was declared eradicated in 2000. There have been 681 measles cases across 22 states so far this year, a CNN review of state and local health department data shows. Most of the cases in the US have popped up in communities with low vaccination rates. Measles outbreaks -- defined as three or more cases -- have been ongoing this year in Rockland County and New York, New York; Santa Cruz and Butte counties in California; Washington state; New Jersey; and Michigan.

You may not be able to stream "The Office" and other fave sitcoms on Netflix for much longer. NBC may yank them as it starts its own streaming service.

Welcome to the Houston high school that has a strict dress code ... for parents.

An intermission would be nice

If you're running out to see the three-hour-long "Avengers: Endgame" tonight, you might want to take the Runpee app with you, for reasons that should be obvious.

Meet Rodney Robinson. He teaches incarcerated kids as a way to honor his mom, who was denied an education. Now, he's the National Teacher of the Year.

"Somebody dropped the ball."

Seamus Hughes, deputy director of the Program on Extremism at George Washington University, on the revelation that a one-time Islamic jihadist who spent years in an Israeli prison for attempting to bomb a bus was granted US citizenship

The approximate number of decks of cards sent to the office of a Washington state senator who said nurses "probably play cards" most of the day. She apologized.

The robots are coming

Oh, don't let the cute little robot's giggles fool you. It's just another part of the machines' plan to one day replace us all. (Click to view.)

Hi: 107° Lo: 65°
Feels Like: 72°
More Weather
Today a heat wave continues but tomorrow night rain moves in, lasting into Saturday with much cooler temperatures. We warm up again on Tuesday.