Nationalism is trending, and Trump isn't doing anything about it 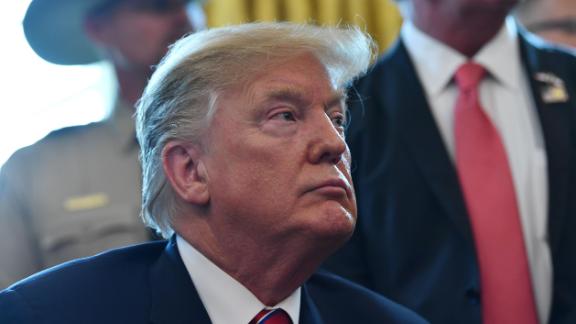 Every week, I offer a glimpse of the kind of intelligence assessments that are likely to come across the desk of the President of the United States, modeled on the President's Daily Briefing, or PDB, which the director of national intelligence prepares for the President almost daily.

As the President prepares for his meetings with hard-right Brazilian President Jair Bolsonaro this week, and on the heels of the horrific terrorist attack in New Zealand, his team should be preparing an assessment of the rise of nationalist movements around the world.

After terrorist attacks and other mass casualty events, presidents often ask their teams for updated threat assessments. They call emergency briefings in order to better understand the cause of an attack and the likelihood that more violence could follow. Those briefings -- based on the best analysis that the US government has to offer -- can be used to develop new strategies to keep the American people safe.

We do not know if President Donald Trump asked for a briefing on violent nationalist movements after the Christchurch attack and after the suspected gunman released a manifesto espousing white nationalist views.

We do know, however, that Trump minimized the threat of white nationalism on Friday when he said that he doesn't see it as a major threat The President must not have read his own counterterrorism strategy before he signed it, because it specifically talks about the threat of nationalist movements to Americans.

Plus, there's open source data shows that far-right terrorism is rising around the world. In the US alone, the Anti-Defamation League (ADL) assessed that white supremacist murders in the US "more than doubled in 2017." It also found that far-right extremist groups and white supremacists were "responsible for 59 percent of all extremist-related fatalities" in America in 2017.

Any presidential briefing would note that far-right nationalism doesn't just linger in dark corners of the internet. Far-right nationalism is on the rise, publicly and around the world. Many far-right world leaders have -- whether intentionally or not -- become symbols for different nationalist groups and individuals that engage in violence.

While Trump reacts to the terrorist attack in New Zealand, he's about to welcome the "Trump of the Tropics" -- the far-right President of Brazil Jair Bolsonaro -- to the White House. Bolsonaro and Trump have more than a few things in common, including nationalist views.

Any profile of Bolsonaro -- whom Trump is expected to first see on Monday -- would include a description of his far-right views. He campaigned on a nationalist platform which included Trump-esque rhetoric, including criticizing the media and the left. He's also known for his racist, homophobic and sexist remarks

Since taking office, Bolsonaro has taken a hard-line stance on immigration (he's previously made anti-immigration remarks that echo Trump's, including that "the scum of the earth is showing up in Brazil, as if we didn't have enough problems of our own to sort out") and how it relates to preserving Brazilian sovereignty and culture.

Nationalism is trending in Europe

But nationalism isn't limited to Bolsonaro. While far right movements in European countries have distinct national flavors, many employ similar rhetoric, including claims about an immigrant "invasion." Trump himself used this term again on Friday when discussing immigration and narcotics flows at our southern border.

To make matters more complex, Trump has described himself as a nationalist. But in light of that characterization, he may want to take a look at the company he's keeping.

In Europe, far-right nationalist parties are making political gains. As these parties gain more political power, the propensity for people to get inspired by their rhetoric -- and their policies -- is higher. The US intelligence community assessed that ethno-supremacists and ultranationalists in Europe posed a significant enough threat to US interests that they were listed in the latest worldwide threat assessment -- compiled by the US intelligence community -- and if nationalist momentum continues in Europe, we could see that threat increase further.

Italian Prime Minister Giuseppe Conte, whose right-wing nationalist coalition wields significant power, visited Trump at the White House in July, and the adulation between the two was apparent. In Germany, the far-right Alternative for Germany Party is gaining traction, as is the Freedom Party in Austria, Slovenian Democratic Party in Slovenia, Sweden Democrats in Sweden, and Freedom Party in the Netherlands, just to name a few. In other words, staunchly anti-immigrant, anti-Muslim, right-wing parties in Europe are gaining increased traction and along with them, bigoted rhetoric and, potentially, policies.

The European Union Parliamentary elections this spring will be another litmus test for just how strong a grip nationalism has on Europe, although the growing right has already made itself apparent in national elections.

Hungarian Prime Minister Viktor Orban may be one of the most powerful nationalist leaders in Europe. In addition to curtailing democratic freedoms and consolidating power, he has taken staunchly anti-immigrant and anti-Muslim positions (he's called Muslim refugees "invaders" and pledged to protect Hungary from the "rust" of Muslim immigration) and has even begun building his own border fence.

His use of Islamophobic rhetoric and conspiracy theories, along with his focus on promoting Hungary's Christian identity, have been trademarks of his years in office. He's heralded by right wing figures throughout Europe, particularly when he equates migrants to terrorists threatening to invade his country.

And Orban has found common ground with nationalist officials -- including in Poland's Law and Justice Party -- especially over anti-migration platforms. The leader of Poland's Law and Justice Party (which secured strong gains in Poland's last parliamentary election) has even suggested that migrants could bring "epidemics" to Europe "which don't affect their organisms, but which could be dangerous here." This kind of language could inspire more violence against Muslims and immigrants.

Trump has taken a new approach to Orban. While President Barack Obama calibrated his outreach to Orban carefully by largely avoiding high-level contact, Trump, at least according to his ambassador to Hungary David Cornstein, thinks that Orban is "a very strong leader. And our President admires strong leaders and looks forward to this relationship going forward."

Trump appears to agree with Orban on the threat that migrants pose to "European culture" -- Trump himself said that immigration is "changing the culture of Europe." And Orban is hungry for friends -- especially ahead of EU Parliamentary elections.

Meanwhile, Russian President Vladimir Putin has branded himself a nationalist, and he's not going anywhere anytime soon. Since securing another term as President in a deeply-flawed election, Putin is in office until at least 2024, with the possibility of extending his rule beyond that. He's found allies in some of Europe's nationalist leaders, including Austria's Chancellor Sebastian Kurz, Hungarian President Orban and members of Italy's ruling coalition.

As part of his ongoing goal to degrade the US-led liberal democratic order and maintain his grip on Russia, we should expect him to continue doing everything he can to advance his own nationalist agenda. This includes supporting leaders who want to diminish European integration (which nationalist leaders in Europe largely want to do). And we should expect him to inflame tensions over controversial issues like immigration.

Meanwhile, Trump's description of himself as a nationalist leaves little doubt about who he aligns himself with ideologically. While he fails to acknowledge any connection between his words and violence, many alleged terrorists, a Klansman (who Trump later disavowed) and other extremists do view him as an inspiration.

Regardless of whether other nationalist leaders around the world intend to inspire violence, their positions of power, along with the dangerous rhetoric they employ, are stoking divisions. Given the risks, leaders should think twice before they speak, especially those who know that they are viewed as symbols for violent movements.

Hi: 60° Lo: 48°
Feels Like: 54°
More Weather
Light showers and gusty south winds are ahead for your Tuesday. We'll dry out and get warmer through the middle of this week. More showers are possible late Friday into Saturday, but we'll dry out just in time for Halloween on Sunday.