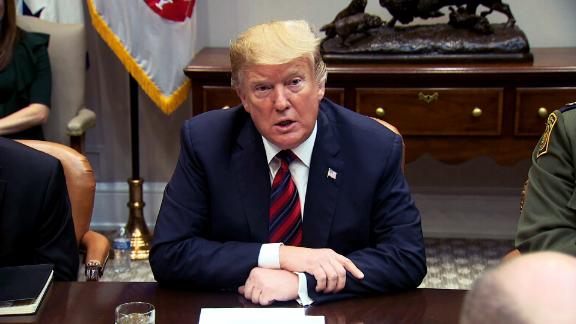 President Donald Trump says new information about the crash of an Ethiopian Air Boeing 737 Max 8 led his administration to order the immediate grounding of all Max 8 and 9 aircraft in the US.

The Federal Aviation Administration identified similarities between the crash of an Ethiopian Airlines flight and the Lion Air crash in Indonesia, leading the agency to ground all Boeing 737 Max planes on Wednesday.

In its emergency order, the FAA said new information about Sunday's crash "indicates some similarities" between the two disasters that "warrant further investigation of the possibility of a shared cause that needs to be better understood and addressed."

"Pilots have been notified, airlines have been all notified. Airlines are agreeing with this. The safety of the American people and all people is our paramount concern," Trump said from the White House.

US carriers, including American Airlines, Southwest Airlines and United Airlines, that fly Max 8 planes began canceling some flights and were working to rebook the affected passengers.

The grounding will remain in effect indefinitely, the FAA said, pending the examination of flight data recorders and cockpit voice recorders from Ethiopian Airlines Flight 302.

The black boxes from the Ethiopian Airlines plane were being sent to Paris, a spokesman for the French Bureau of Enquiry and Analysis for Civil Aviation Safety (BEA) said.

France is set to handle the review of the black boxes, which are expected to arrive in the country by Thursday, the spokesman said.

Ethiopian Airlines spokesman Asrat Begashaw had told CNN the "black box" data recorders recovered would "definitely be going to Europe," as Ethiopia does not have the necessary equipment to analyze that data.

The US and Canada had been the only two countries still flying the aircraft. To date, 385 Max aircraft have been delivered, according to Flight Global, of which 344 are the Max 8 variant.

The Ethiopian Airlines Boeing Max 8 jet plummeted into a field shortly after leaving Addis Ababa's Bole International Airport on Sunday morning, killing 157 people. One of the pilots reported flight control problems and asked to return to the base.

As investigators search for clues as to the cause of the disaster, more aviation authorities and experts are drawing parallels to the Lion Air Boeing Max 8 plane that went down last October over the Java Sea in Indonesia, killing all 189 people on board.

In its emergency order, the FAA said "new information from the wreckage concerning the aircraft's configuration just after takeoff that, taken together with newly refined data from satellite-based tracking of the aircraft's flight path, indicates some similarities" with the Lion Air crash.

Speaking to reporters, Daniel Elwell, the acting administrator of the FAA, said the data was "added fidelity -- missing pieces that we did not have prior to today." It aligned the Ethiopian flight data to the Lion Air incident.

As the Ethiopian Airlines and Lion Air crashes are still under investigation, there is no evidence that they had a common cause.

When Canadian Minister of Transport Marc Garneau announced the country would no longer allow the 737 Max 8 or 9 aircraft to take off or land in Canada, he also mentioned the new data.

He said satellite tracking data collected when certain aircraft take off -- specifically the vertical profile of the aircraft -- was analyzed by officials and was the reason they decided to ground the Boeing 737 Max 8 and 9 over Canadian airspace.

While not conclusive, Garneau said there were similarities in the new data they analyzed and the doomed Lion Air flight that caused them to feel a threshold had been crossed to halt those flights.

The Max 9 model has never crashed, but it was included in an FAA emergency airworthiness directive following the Lion Air crash last year. A Max 10 model is still in development.

In the meantime, some aviation experts are focusing on the similarities between the two incidents.

"Given in both air crashes, the aircrafts were newly delivered Boeing 737 Max 8, and both accidents occurred during the takeoff, they share certain similarities," the Chinese administration said in a statement.

"We believe the similarities are substantial" between the two crashes, GebreMariam said, adding that both incidents featured new models of the same airplane, and both flights lasted only minutes before the planes went down.

"We don't yet know the exact cause of the accident, and speculation is not helpful in either way," GebreMariam said, "but I think there are questions without answers on the airplane."

US officials and Boeing had argued to keep the planes operating in the wake of the fatal crash but changed course in light of new information.

Elwell told reporters the agency had held off on the grounding because they expected to have more flight data by now. The process has been "lengthened" unexpectedly, he said.

"We had been hopeful all along that with these black boxes being discovered so soon after the incident that we could get them on a table" Elwell said.

Boeing said it supported the FAA and the Trump administration's decision. The company said it recommended the FAA to temporarily suspend the global operations of all its 371 Max aircraft.

"We are supporting this proactive step out of an abundance of caution. Safety is a core value at Boeing for as long as we have been building airplanes; and it always will be," said Boeing CEO Dennis Muilenburg in a statement.

China's aviation administration was the first to order a suspension on Monday evening, grounding all domestic Boeing 737 Max 8 jets, citing its principle of "zero tolerance for safety hazards."

China has one of the world's largest fleets of Boeing 737 Max 8s, operating 97 of the planes, according to Chinese state-run media.

The fallout for Boeing and its future in China could be severe for investors: China is predicted to soon to become the world's first trillion-dollar market for jets.

Aviation safety experts, regulators and pilots around the world remain divided on whether the Boeing 737 Max 8 is safe.

"I've never said that it's unsafe to fly a particular model of aircraft, but in this case, I'm going to have to go there," David Soucie, a former FAA safety inspector, told CNN, saying passengers don't have enough information.

The Air Canada Pilots Association applauded Canada's decision, saying that they supported the decision "to be proactive and take steps, consistent with other jurisdictions, to help ensure the safety of the Canadian traveling public."

But other pilots disagree. The pilots union at Southwest Airlines, which had the largest fleet of Max 8s flying before Wednesday's grounding in the US, stood by their airline's decision.

In a Southwest Airlines Pilot Association letter, union president Jonathan Weaks said the union is "extremely confident" that the 737 Max is safe.

He added that he would put his family, friends and loved ones on any Southwest flight, but that he has lobbied for training to "evolve and improve."

The letter warns, however, that if new information comes to light, the union "will not hesitate to hold any organization or person accountable."

Hi: 78° Lo: 48°
Feels Like: 57°
More Weather
Much cooler with gusty winds and the potential for active weather this weekend.