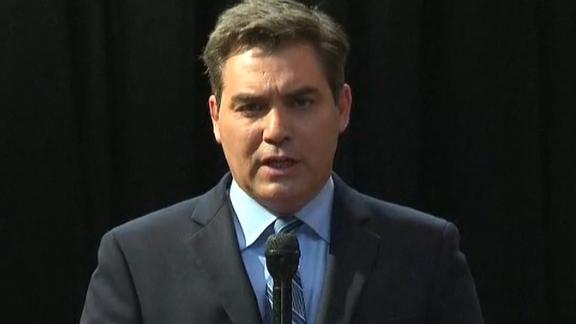 President Donald Trump says he takes North Korean leader Kim Jong Un at his word when he told him he had nothing to do with the treatment of deceased American Otto Warmbier. CNN's Jim Acosta says Trump is giving Kim a pass.

It almost sounded like compassion -- compassion for the North Korean dictator Kim Jong Un -- when President Donald Trump explained that Kim "felt very badly" about what had happened to Otto Warmbier, the 22-year-old American student taken prisoner by Kim's henchmen for 17 months. Gone were Trump's charges that Kim runs a "brutal regime," which he stated when Warmbier was returned to the Unites States in 2017-- in a coma. He died less than a week later.

At a press conference in Hanoi on Thursday, Trump said of Kim, "I will take him at his word."

It was another demeaning moment not only for Trump, who has gushed about the tyrant on several occasions, but also for America. And it was made even more humiliating for the United States when the President heaped additional praise on Kim's "great leadership," which he said will bring much success to his country.

To be clear, he was referring to a regime that a United Nations investigation concluded commits crimes against humanity that "entail extermination, murder, enslavement, torture, imprisonment, rape, forced abortions and other sexual violence, persecution on political, religious, racial and gender grounds" -- violations of a gravity and scale "that (do) not have any parallel in the contemporary world."

Of course, this does not mean that Trump should never meet and be civil with dictators. But gushing is optional -- and, in his case, it appears appallingly sincere.

Trump has a well-established affinity for dictators, and he's known for taking their word over that of his own experts. He took Russian President Vladimir Putin's word over that of his own intelligence professionals regarding Russia's 2016 election interference. He took Saudi Crown Prince Mohammed bin Salman's word that he was not involved in the killing of the Saudi journalist Jamal Khashoggi. Meanwhile, the CIA believes the Saudi crown prince ordered the killing.

But it is with Kim that he has shown the most obsequious behavior, a school-boy crush. "We fell in love," he explained, as he sought to make a deal with the dictator in 2018. Trump appears more interested in burnishing his own reputation as a negotiator -- better than his predecessors -- than in almost any other consideration.

This week, the two major news events -- Trump meeting Kim in Hanoi, and Trump's former lawyer Michael Cohen testifying before Congress -- provided a clear portrait of a morally hollow presidency. Cohen described a man devoid of principles and determined to win in pursuit of money, power and prestige. And, in Hanoi, we saw the risks of having such a man as President.

Many were skeptical of a second summit. But Trump had ignored the advice of experts, who tried to tell him a good personal relationship was not enough to persuade Kim to fully surrender his nuclear arsenal.

He went with his gut, poorly prepared -- a well prepared summit doesn't end without even a minor face-saving document -- and had another face-to-face meeting, an approach that has so far helped to cement Kim's rule by bolstering his standing at home and in the international community. A man who was a pariah on the global stage is now a quasi-respected figure, honored by the praise of, and high-profile summits with, the US President.

But let's not forget that North Korea is a dangerous country. It has attacked South Korea time and again and has built a deadly nuclear arsenal. A new risk emerged as Trump turned North Korea into a symbol of his negotiating prowess -- one he tries to use to compare himself favorably to former President Barack Obama and others before him.

Early on in his presidency, Trump threatened "fire and fury" against Kim. In his first State of the Union in 2018, he even mentioned human rights, a topic he appears now to have wholly forgotten. "No regime has oppressed its own citizens more totally and brutally than the cruel dictatorship of North Korea," he declared, explaining that "complacency and concessions" aggravate the risks, and vowing, "I will not repeat the mistakes of past administrations."

But then he saw an opportunity to make history, to build his art-of-the-deal brand. As a deal with Kim looked harder to reach, though, Trump made major concessions. According to CNN, he even weighed dropping the fundamental demand that North Korea provide a full accounting of its nuclear and missile programs. The move suggested to experts that, as almost anyone but, apparently, Trump believes, Kim has no intention of getting rid of his nuclear program.

Several months later and Trump still seemed determined to get a deal. But it was not to be, at least for now. That's because while Trump may think he's cleverly manipulating Kim with his embarrassingly high praise, it is Kim who has Trump's number. Kim demanded that the US lift economic sanctions before he would dismantle the Yongbyon nuclear facility. If Trump had agreed, the world would have laughed.

Instead, Trump walked away. That came as a relief to those of us who feared a truly disastrous deal. And, yes, he has managed to reduce the temperature in the relationship, lowering the risk of nuclear confrontation for the time being. But in so doing, he has also made the world cringe -- unnecessarily praising a ruthless ruler, and forever tarnishing America's image as an (admittedly flawed) advocate of human dignity for all.

Trump's performance in Hanoi helps explain why even though Cohen, a convicted liar, has serious credibility problems, his testimony in Congress rang true. Trump has shown the world that principles play a minimal role, if any, in his conduct. He defended and praised the man whose regime's brutality led to the death of Warmbier, a young American student guilty of the most minor of infractions.

It was a shameful day for America.

Hi: 95° Lo: 59°
Feels Like: 82°
More Weather
Mostly sunny skies and slightly cooler temperatures are expected for your Friday. We'll be mostly sunny and a little warmer through your 4th of July weekend.

Businesses caught in the middle of mask mandate battle

Coronavirus outbreak at prison in Susanville