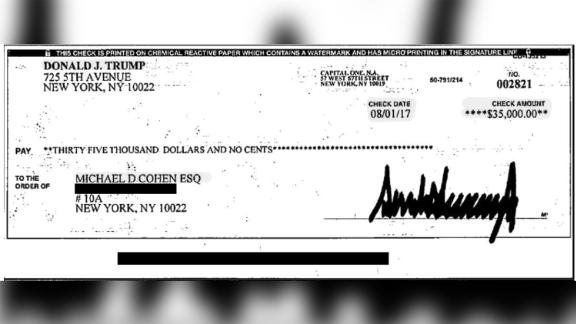 A source familiar with Michael Cohen's prepared testimony to Congress provided CNN with a copy of a $35,000 check President Donald Trump allegedly sent to Michael Cohen. There's nothing written on the check to specify its purpose. However, Cohen's prepared testimony submitted to Congress and obtained by CNN says the check reimbursed him for hush money payments to silence Stormy Daniels about her alleged affair with Trump. Trump denies having an affair with Daniels.

It's a mark of the high stakes Wednesday that he's embraced the opportunity to counter-program the testimony of his infamous former fixer, Michael Cohen, with a North Korea nuclear summit.

That's how explosive the Cohen hearings could be for this presidency.

The phrase "congressional testimony" doesn't always get the blood up in people. There's a tendency to view it all as a bit of Kabuki theater, predictable and full of posturing.

That's especially true in the Trump era, where scandals pile up with such speed that to many of us, nothing's shocking anymore.

But not all congressional testimonies are created equal. Some become defining moments in American politics and even change the trajectories of presidencies.

From a man who was by Trump's side for years, the testimony is damning. Cohen paints a picture of a president as a "con man," a "racist" and an instinctive liar who treated his presidential campaign as "the greatest infomercial in political history."

He's presenting evidence of personal checks from the President he says were to repay him for Stormy Daniels. Cohen's prepared testimony also states that Trump knew about Roger Stone's contacts with WikiLeaks, which has been denied in the past. It states that Trump lied about the Moscow tower deal. And it states that Trump may have known about the Trump Tower meeting that was set up on the pretext of getting dirt on Hillary Clinton from a hostile foreign power.

Bottom line, it's full of bombshell revelations that rival the testimony that took down President Richard Nixon.

John Dean is a now CNN analyst, but in June 1973 he was Nixon's just-fired White House counsel and a Watergate whistleblower.

At first, he was an unwitting contributor to the cover-up of the burglary at the Watergate, facilitating payments to people involved.

When Dean eventually understood that he was committing obstruction of justice, he at first shredded incriminating documents -- then he says, he decided to come clean before Congress.

And he came prepared. His 245-page opening statement took an entire day to read. Dean testified that he'd discussed the Watergate cover-up in Nixon's presence at least 35 times. And he'd told "the president that there was a cancer growing on the presidency and that if the cancer was not removed that the president himself would be killed by it."

Dean's testimony led to more revelations -- such as the existence of a secret White House taping system, which would ultimately help sink Nixon.

In the White House whistleblower pantheon, only one other congressional testimony comes close.

That's the case of Lt. Col. Oliver North, who blew the lid off the Iran-Contra affair.

In 1986, North was a National Security Council staffer tasked with an elaborate scheme to use profits from secret Iranian arms sales to back anti-communist Nicaraguan rebels, known as the Contras -- something Congress had already specifically prohibited.

By 1987, North had been made the fall guy for Iran-Contra, fired by President Reagan for it, and was ready to tell the whole sordid tale to Congress.

According to North, what he did was just follow orders: Protect his superiors, destroy documents and mislead Congress, even some members of the Reagan administration.

But what he did not do was operate without the explicit approval of his higher-ups, which he assumed included the President.

North would go on to be convicted of a range of crimes stemming from his role in Iran-Contra, which would later be thrown out on appeal, ironically because prosecutors couldn't prove that North's must-see-TV testimony didn't taint the trial witnesses.

Regardless, North emerged as a conservative hero and currently serves as the head of the National Rifle Association.

It's a reminder that politics is history in the present tense. And high-stakes congressional testimony by a whistleblower can make as much difference in the trajectory of a presidency as a nuclear summit with a hostile foreign power.

Hi: 69° Lo: 43°
Feels Like: 59°
More Weather
It’s Saturday!! The weather is looking good for the final day of the weekend! Tonight will look very similar to what we saw last night, temperatures in the upper 30s to low 40s with a mostly clear sky.