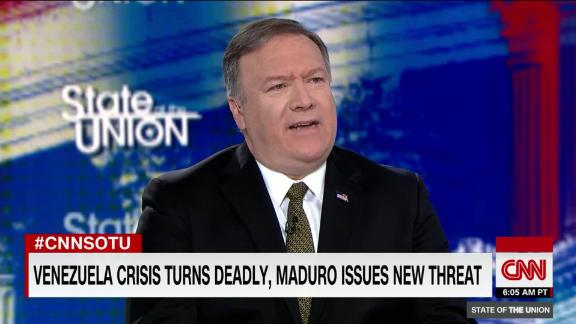 In an interview with Jake Tapper, Secretary of State Mike Pompeo says he is confident the people of Venezuela will ensure that Maduro's days are numbered.

Deaths and injuries: Nearly 300 people are estimated to have been injured in clashes between Venezuelan troops loyal to President Nicolas Maduro and protesters in areas near the country's border over the weekend. The opposition says five people were also killed. CNN has not verified those numbers.

Aid deliveries: Trucks carrying supplies were stopped at most spots Saturday. Witnesses said two trucks were set ablaze while attempting to cross into Venezuela from Colombia.

US response: US Secretary of State Mike Pompeo condemned the actions of Maduro's government and said the US would "take action against those who oppose the peaceful restoration of democracy in Venezuela." Pompeo wrote on Twitter: "What kind of a sick tyrant stops food from getting to hungry people? The images of burning trucks filled with aid are sickening."

US will offer Guaido 'unwavering support'

While in Colombia, Pence will also address a meeting of the Lima Group -- a diplomatic body created by leaders mostly from Latin American countries to help mitigate the Venezuelan crisis.

Guaido, who arrived in Bogota Sunday, is battling President Nicolas Maduro for control of Venezuela. He has called for other nations to send aid to the country in response to worsening food and medicine shortages. But Maduro -- who won re-election in a widely-criticized vote last year -- denies that a humanitarian crisis exists in Venezuela and suggests that aid efforts are part of a US plot to orchestrate a coup.

The dispute led the Venezuelan military -- on Maduro's order -- to block aid convoys at the country's border on Saturday.

Trucks carrying supplies were stopped at most spots Saturday. Witnesses said two trucks were set ablaze while attempting to cross into Venezuela from Colombia.

CNN cannot independently confirm the incident or the circumstances of how the two trucks were set on fire.

While a CNN team saw incendiary devices from police on the Venezuelan side of the border ignite the trucks, the network's journalists are unsure if the trucks were burned on purpose.

Humanitarian aid moved through the Brazilian-Venezuelan border in Pacaraima, according to Maria Teresa Belandria, Venezuela's opposition-appointed ambassador to Brazil.

Venezuelan soldiers faced off against protesters who were demanding to cross the border at Ureña to go work in Colombia, according to a CNN crew that witnessed the scene at the Tienditas Bridge.

The Colombian foreign minister said 285 people were hurt, with 37 requiring hospitalization, after the Venezuelan National Guard fired tear gas and rubber bullets at protesters near the Colombian border Saturday.

The Venezuelan Government's special envoy for the Tachira State -- which borders Colombia -- said Sunday more than 300 people were injured Saturday.

"The Bolivarian forces registered 315 injured, some by firearm others by Molotov cocktails," envoy Freddy Bernal said. "We registered no deaths despite the violent attacks for more than 15 hours of battle" by groups on the international bridges fighting "against thousands of patriots who fought and defended themselves."

CNN cannot independently confirm the number of fatalities, but Michelle Bachelet, the UN high commissioner for human rights, said there were four deaths and 300 injuries Friday and Saturday.

The governor of Roraima, the Brazilian state bordering Venezuela, declared a state of medical emergency on Sunday, according to a press release from the Roraima Ministry of Health.

Governor Antonio Denarium is quoted in the release saying the state's largest hospital, in the capital Boa Vista, is "at the brink of collapse" following the influx of victims injured in clashes across the border in Venezuela.

Sunday was quieter. Small clashes broke out again at a town near the border with Colombia. CNN's team in Ureña, Venezuela, saw dozens of people throwing rocks toward Venezuela's National Guard, who fired back with rubber bullets. There was no report on injuries.

Rodriguez said that the country's security forces had protected the border in "exemplary" fashion.

But Bachelet, the UN official, described "disgraceful scenes." "The Venezuelan government must stop its forces from using excessive force against unarmed protesters and ordinary citizens," she said.

In a statement Sunday, UN Secretary General António Guterres said he is "following with increasing concern" the tensions in Venezuela.

Guterres called "for violence to be avoided" and "for lethal force not to be used in any circumstances."

Meantime, Colombia's customs agency said Sunday that 104 members of Venezuela's security forces have defected, entering Colombia. The development is a sign that Maduro's grip on the military -- control of which is seen as integral to forcing new elections -- could be waning.

But Maduro put out a defiant message Sunday.

"The people are united in the streets, mobilized and alert in every corner of the country," he said on Twitter. "I call on men and women of goodwill, not to lower their guard and to stay in the fight to preserve Venezuela's peace. Long live the Rebel homeland!"

Hi: 91° Lo: 55°
Feels Like: 59°
More Weather
The weather will be pulling a 180 as we head into the evening hours and kick off our work week. A north wind will be taking hold, bringing gusty conditions and increased fire danger to the valley, foothills, and the Sierra Mountains. Gusts between 25-35mph are possible from late this evening through Monday night for the valley while the foothills and the Sierra will continue to see the windy conditions through Tuesday morning. This has prompted a Red Flag Warning for the Valley 11pm tonight through 8pm Monday while the Sierra and Foothills will last through Tuesday morning.

US launches mass expulsion of Haitian migrants from Texas