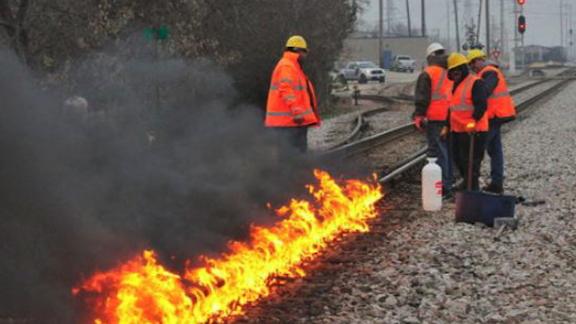 The weather in Chicago is so cold that rail crews are using fire to heat up railroad tracks to ensure trains can run smoothly.

Step inside the cave in Siberia that sheltered the first known humans 300,000 years ago. Here's what else you need to know to Get Up to Speed and Out the Door. (You can also get "5 Things You Need to Know Today" delivered to your inbox daily. Sign up here.)

The Midwest is still stuck in a deep freeze. The temperature is well below zero in many states, thanks to a breakdown in the polar vortex that's flooding the region with the coldest air it's seen in years. Chicago set an all-time record low of 27 below zero. And residents are reporting hearing a series of mysterious booms. Those are "frost quakes," which happen when water underground freezes and expands, causing soil and rock to crack. In the Northeast, snow squalls and near-whiteout conditions hampered motorists.

At least 10 deaths are linked to the extreme weather this week. More than 4,800 flights have been canceled. Schools are closed. Mail delivery is suspended. Blood drives are called off. Chicago's commuter train service is setting tracks on fire, for safety. Even beer deliveries are on hold. Those are just some of the 17 ways (and counting) the cold temps are hitting the country.

A pro-Russian Twitter account spread confidential information from a criminal case that special counsel Robert Mueller's team brought against a Russian company for social media conspiracy, the Justice Department said. Prosecutors allege that info shared with lawyers representing Concord Management and Consulting ended up being used by the now-suspended Twitter account in an effort to discredit Mueller's Russia investigation. The development highlights just how tense the standoff has gotten between US law enforcement and the Russian operation accused of interfering in the 2016 election.

Foxconn got $4 billion in tax breaks (and a ton of controversy) in exchange for a promise to build flat-screen panels at a Wisconsin plant and hire up to 13,000 workers. Now, it looks like the Taiwanese electronics manufacturer is changing its plans. Foxconn says it can't "compete" with lower-cost flat-panel plants elsewhere in the world, so it's going to create a technology hub in Wisconsin instead of a factory. Three-fourths of the jobs will be in research, development and design, rather than the blue-collar manufacturing jobs President Trump crowed about when the deal was announced. Foxconn said it's still committed to creating as many as 13,000 jobs in Wisconsin.

An immigrant family set to be deported from the Netherlands can stay in the country for at least a little longer, thanks to a church service that lasted more than three months. The Tamrazyans, a family of five from Armenia, had sought asylum but got denied. They sought shelter in October in a church in The Hague. Since Dutch law prohibits police from entering a church during a service, the church held rites continuously for 96 days to protect the family. Now, the Dutch government has struck a deal that allows the asylum applications of families already in the country to be reassessed.

Wall Street heard the news it wanted from the Fed: No interest rate hikes for now. The Dow celebrated by climbing 435 points. Fed Chairman Jerome Powell said the decision was not based on worries about the US economy, which is still quite strong. Regulators are concerned about the economic slowdown in China and Europe, the US trade war with the Chinese and the just-ended partial government shutdown. President Trump, in a break with White House precedent, had been lobbying for the Fed to slow down the rate hikes, but Powell said that had nothing to do the decision.

Ariana Grande fixed her tattoo. Meant to celebrate her single, "7 Rings," it had praised barbecue (in Japanese character symbols) instead.

It's about to get really hard to be a dog owner in Iran. The country has reportedly banned pooches from riding in cars and from being walked in public.

Well, of course, it's Florida

Public works employees responding to a report of a sinkhole found something entirely different: a small tunnel leading to a bank.

Meet the 14-year-old who discovered the bug in Apple's FaceTime that turned iPhones into eavesdropping devices.

Nick Cannon, who's already hosting, like, a billion other shows on TV, will guest-host Wendy Williams' show as she deals with Graves' disease.

Facebook's record profit for the last quarter of 2018. Turns out the PR crises don't seem to be hurting it too much.

Singer Céline Dion, to critics who say she's lost too much weight

New Orleans Saints head coach Sean Payton, who dealt with his team's heartbreaking loss in the NFC Championship just like any fan would. And the Who Dat Nation isn't done mourning. Many Saints fans vow not to watch Sunday's Super Bowl (though it won't dent national ratings).

Along for the ride

What's it like to go downhill skiing? You're about to find out, thanks to this guy, who swapped out one of his ski poles for a selfie stick. (Click to view.)