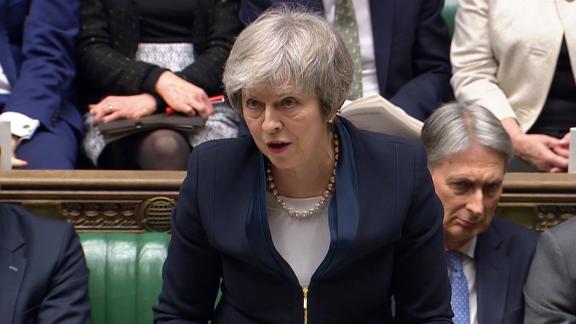 UK Prime Minister Theresa May postponed the Brexit vote once before, but after 8 days of fractious debate, there was no avoiding it. CNN's Nick Glass takes a look at what was a historic defeat in parliament.

<p>So, that's cleared that up. One Brexit option down, only four (by my conservative count) possible scenarios left. Tuesday's <a href="https://www.cnn.com/2019/01/15/uk/brexit-vote-theresa-may-gbr-intl/index.html" target="_blank">historic defeat</a> for Theresa May and her European Union withdrawal plan leaves the British people and their government with 72 days to come up with a Plan B before the March 29 deadline.</p><p>Will there be fresh elections? A softer Brexit plan to win over the center? A no-deal crash landing? Or a second referendum? Who knows? Certainly not the politicians charged with putting the people's wishes into action.</p><p>What a desperate, disappointing shambles. What a predictable bloody mess.</p><p>I take little comfort in watching it all unfold from the safe distance of New York. In fact, I fear that watching from this side of the Atlantic is turning me into the second worst type of expat, the one who has nothing but harsh words for his homeland. (The worst, of course, being the type that has nothing but criticism for his adopted homeland.)</p><p>Of course, America has its own political problems. It has its own trouble with populism. But Britain's descent into polarized point-scoring has exposed a fractured politics that simply does not exist in the United States. It all feels a bit big voices, small Parliament.</p><p>There's no shortage of loud-mouthed Brexiteers content to heckle May from the backbenches, but none of them seems ready to dump her and steer an alternative course through this mess. The same goes for Jeremy Corbyn's opposition, a party of Remainers led by a Brexiteer. How does he see Britain outside Europe -- other than as a convenient vehicle to remove the Tories from power?</p><p>Which is to say, I'm left with more questions than answers: Who has the long-term vision for Britain? Where are the bold figures ready to stand up and do what is right, rather than the heavy hitters content to stand on the sidelines and carp? Where are the brains ready to forge a new, post-Brexit place for Britain in the world?</p><p>It is almost as if formulating policy based on internal party politics, offering an apparently unwinnable referendum to poisonous Eurosceptics in the hopes of silencing them, might not be the best way to go about drafting an election manifesto. Former Prime Minister David Cameron, I'm looking at you.</p><p>So, when the referendum turns out to be not so unwinnable as previously thought -- or at least by the wrong side -- the result is a rush job of an exit plan, as May tried to do the impossible, working her way through the 700-plus EU treaties that will exclude Britain after Brexit Day.</p><p>It inevitably relies on compromises to get the job done, just the sort of thing to ensure opponents can pick holes. Rather than ending the EU debate once and for all, the referendum merely kicked the ball down the road to an exit deal that neither the conservative right nor the socialist left can stomach. And we are left with a decision to opt for indecision.</p><p>It's like, after choosing to take the plunge away from Europe, we have chosen to doggy paddle across the English Channel. That'll teach those croissant-eating continentals, eh?</p><p>American problems are different. The megalomaniac in the White House may be holding much of the government ransom over his border wall plan,<a href="http://fortune.com/2019/01/09/govt-shutdown-2019-costs-billions/" target="_blank"> costing the economy </a>billions of dollars, while his administration is hobbled by the Russia investigation, but the root cause is not a glaring lack of ambition. It is not a lack of will. Quite the opposite.</p><p>And if Donald Trump were the one leading Brexit, it would have been completed by now. Either the European Union would have been renamed "Britain and The Rest," and we could all carry on as before (if his <a href="https://www.cnn.com/2018/10/01/politics/nafta-usmca-differences/index.html" target="_blank">renaming of NAFTA</a> is anything to go by), or Britain would have crashed out with no deal and a collapsing economy long ago.</p><p>At least with Trump you know where he stands. It's written on his red hat. It's right there among the <a href="https://www.cnn.com/2019/01/14/politics/donald-trump-clemson-food/index.html" target="_blank">stacks of hamburgers</a> at the White House.</p><p>What does Britain stand for? That is what this whole shabby mess has revealed. We have no idea what we want to be. Until our politicians decide that, then it is doomed to float around a few miles off the coast of Europe.</p><p>But let me be clear. I don't want them to write it on a hat.</p><p>If Britain needs something from America right now, it is a touch of its can-do attitude and common sense of purpose. Keeping calm and carrying on is not what is needed when the country is on a self-imposed route toward a cliff.</p>

Hi: 47° Lo: 44°
Feels Like: 46°
More Weather
We've had a gray and cool start to the first full week of December in northern California. Light rain showers will fall tonight, we can expect a breezy and brighter Tuesday, with much more active weather ahead.