The Curiosity rover found organic molecules on Mars. This is why they're exciting 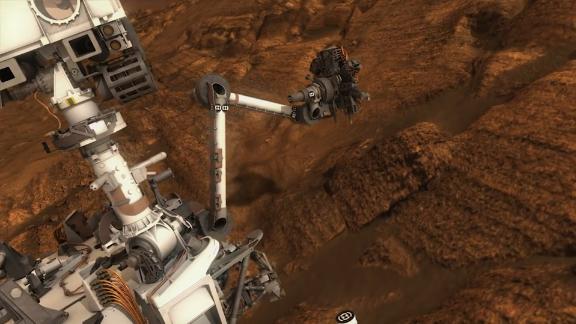 Organic matter has been found on Mars in soil samples taken from 3 billion-year-old mudstone in the Gale crater by the Curiosity rover, NASA announced Thursday. The rover has also detected methane in the Martian atmosphere.

During its time on Mars, NASA's Curiosity rover has focused on understanding the planet's potential habitability in its ancient past, drilling into rocks and studying their dust to determine possible conditions for life. The rover has found some intriguing clues, and now, scientists are following up on those puzzle pieces to understand their origin.

In 2018, the rover hit pay dirt when it found organic matter in soil samples of three billion-year-old mudstone in the Gale crater.

Curiosity sampled sites by drilling five centimeters below the surface in the Gale crater, which is where the rover landed in 2012. The 96-mile crater, named for Australian astronomer Walter F. Gale, was probably formed by meteor impact between 3.5 to 3.8 billion years ago. It likely held a lake, and now includes a mountain called Mount Sharp.

The rover was able to heat the samples to between 932 and 1,508 degrees Fahrenheit and study the organic molecules released through gas analysis. The organic molecules and volatiles, comparable to samples of sedimentary rock rich in organics on Earth, included thiophenes, methylthiophenes methanethiol and dimethylsulfide.

They don't exactly roll off the tongue, but researchers believe that these are fragments of larger molecules that were present on Mars billions of years ago. And the high amount of sulfur in the samples is most likely how they've lasted so long, the researchers said.

Now, researchers have followed up on an investigation into the presence of thiophenes -- organic compounds found in coal, crude oil and even white truffles on Earth -- to determine their potential origin.

They probably aren't evidence of white truffles on Mars, but the researchers think that thiophenes are likely consistent with the presence of life on Mars in its ancient past. Thiophenes likely signify a biological process involving bacteria.

The study published in the journal Astrobiology this week.

"We identified several biological pathways for thiophenes that seem more likely than chemical ones, but we still need proof," said Dirk Schulze‑Makuch, study author and Washington State University astrobiologist. "If you find thiophenes on Earth, then you would think they are biological, but on Mars, of course, the bar to prove that has to be quite a bit higher."

On the atomic level, thiophene molecules are arranged in a ring including four carbon atoms and a sulfur atom. These are considered bio-essential elements.

The search for life outside Earth focuses on the building blocks of life as we know it, which includes organic compounds and molecules -- although these can exist without life. Organic matter can be one of several things: a record detailing ancient life, a food source for life or something that exists in the place of life.

No matter its purpose, these work as "chemical clues" for researchers about Mars. So the researchers had to consider other ways that might explain why they found thiophenes on Mars.

It's possible that impacts by meteors delivered thiophenes, or that they were created during a reaction between sulfates and hydrocarbons at high temperatures.

However, if Mars was the warm and wet place researchers believe more than three billion years ago, bacteria could have created thiophenes or worked to break down the molecules.

Curiosity's data are providing a clearer and more conclusive picture of the conditions and processes on Mars -- and what it may have been like on the Red Planet billions of years ago, when conditions were more suitable for life. But it can only do so much.

The European Space Agency's Rosalind Franklin rover, due on Mars next March, will bring a Mars Organic Molecule Analyzer that can collect and analyze larger molecules. And NASA's recently named Perseverance rover will search for fossils and other signs of ancient life.

The Rosalind Franklin rover's instrument could help identify carbon and sulfur isotopes, atoms representative of chemical elements but different in mass because they contain a different amount of neutrons.

"Organisms are 'lazy.' They would rather use the light isotope variations of the element because it costs them less energy," said Schulze‑Makuch. Organisms start out with similar building blocks that are then altered into heavy and light isotopes, which leave behind "a telltale signal for life," he said.

But it may take landing humans on Mars, in addition to robotic explorers, to learn the truth.

"As Carl Sagan said: 'Extraordinary claims require extraordinary evidence,' " Schulze‑Makuch said. "I think the proof will really require that we actually send people there, and an astronaut looks through a microscope and sees a moving microbe."

Hi: 101° Lo: 63°
Feels Like: 78°
More Weather
We're finally seeing some relief from the heat on the way for your Friday. We'll be around 10 degrees cooler than Thursday on Friday and clouds will be returning for your afternoon. Much cooler with the chance for active weather on the way for your weekend.