No charges for Sacramento officers who fatally shot Stephon Clark 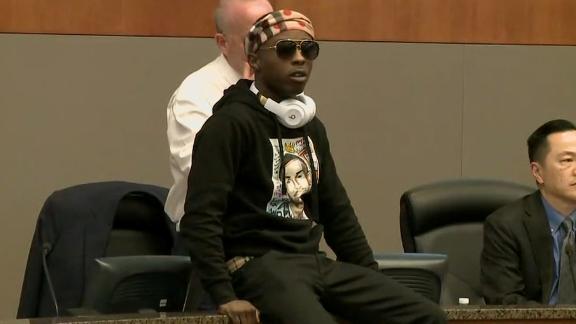 The brother of Stephon Clark, an unarmed black man killed by police, interrupted a Sacramento City Council meeting as chants of the victim's name filled the chambers, illustrating how the fatal shooting has sparked emotions in this California city.

Protesters gathered Saturday evening outside police headquarters in Sacramento, California, after the county's top prosecutor announced she would not be filing charges against two police officers who killed Stephon Clark, an unarmed black man who was fatally shot in his grandmother's backyard last year.

Sacramento County District Attorney Anne Marie Schubert said earlier that the investigation had to decide if officers broke the law.

"When we look at the facts and the law, and we follow our ethical responsibilities, the answer ... is no," Schubert told reporters, hours after meeting with the family.

The case last year became a symbol of strained relations between the police and the community as well as racial tensions in the state capital. Once again city officials and community leaders appealed for peace while bracing for protests.

Clark's mother, SeQuette, told reporters outside a family home in Sacramento that she was outraged.

Schubert described Clark as taking a shooting stance and officers firing after they saw a flash of light that one believed came from a gun being fired. A cellphone was found underneath Clark's body.

Clark was shot seven times, including three times in the back, according to an autopsy released by the Sacramento County Coroner's office. An independent autopsy found that Clark was shot eight times, with six of those wounds in his back, according a forensic pathologist retained by Clark's family.

Schubert detailed a picture of Clark as a 22-year-old man going through a tumultuous time in his life, worried about jail time after being accused of assaulting the mother of his children days earlier.

He also had drugs in his system on the night he was shot and had searched the web on his phone for information about how a person can take his own life.

Schubert would not characterize what happened as a "suicide by cop" but said she made the information public because it was something attorneys would have used in court to establish his frame of mind.

"There were many things weighing heavily on his mind," she said, adding that he also had used his smart phone to research penalties for domestic violence. Schubert said the mother of his children had responded negatively to text messages in which he attempted to reconcile.

The DA also said Clark called the woman scores of times after an incident on March 16.

That woman, Salena Manni, said what happened March 16 or March 17 didn't matter in the shooting. It was the officers' actions that were most important.

"They murdered my fiancé," she said as she wept before reporters.

Schubert focused on her son's personal problems instead of the officers' actions, Clark's mother said.

"That's not a permit to kill him," SeQuette Clark said. "What matters is that those officers came around that corner on a vandalism call and killed him."

Later a few dozen people gathered at police headquarters where they shared stories and poems on a microphone and at times chanted "No justice, no peace!" Some protesters burned Blue Lives Matter flags.

Video of the incident

Authorities said the two Sacramento officers who shot Clark were responding to a report that a man had broken car windows and was hiding in a backyard. The person who called 911 told police the man -- later identified as Clark -- had jumped a fence and police discovered he'd moved through two backyards into another property, Schubert said.

Schubert, who opened her news conference with an apology to the Clark family, said she met with his mother Saturday morning.

"There is no question that the death of Stephon Clark is a tragedy, not just for his family but for this community," she said.

The prosecutor went through a lengthy presentation involving body worn cameras, helicopter surveillance video and photos. She said Clark vandalized three cars, moved to a backyard and broke a sliding glass door to a room where an 89-year-old man was watching television. He then jumped to another yard.

Directed to Clark's location by the sheriff's helicopter, the officers chased him to a backyard, one that belonged to his grandmother.

Clark was about 30 feet away behind a picnic table, the prosecutor said.

About 20 shots are heard in the body camera recording. An officer says, "He is down. No movement. We're going to need additional units."

Family friend: 'Stephon should be alive'

Jamilia Land, a friend of Clark's family and member of CA Families United for Justice, in a statement said no prosecutor's "ruling can change the most important fact -- Stephon should be alive."

"Stephon was unarmed and in no way a threat. Instead, they shot 20 times and hit Stephon at least eight times. Even then, they did not call for medical care even though he was bleeding profusely. Now the Sacramento district attorney says it's unjust to charge these officers with Stephon's murder. Where is Stephon's justice?"

Lizzie Buchen, legislative advocate for the American Civil Liberties Union of California's Center for Advocacy and Policy, said the "decision opens a new wound for the Sacramento community and serves as a potent reminder that California's law on the use of deadly force needs immediate reform."

"As a society, we give police officers the most significant power we confer on the government -- the power to take someone's life," she said in a statement. "Our laws must set appropriate standards to ensure police officers use that power sparingly and with the goal of preserving human life."

Clark's family last month filed a wrongful death lawsuit against the officers involved and the city of Sacramento.

The federal lawsuit alleges the young man was racially profiled, and the officers used excessive force in the shooting incident. The two officers failed to identify themselves or issue a verbal warning before firing approximately 20 shots, the suit said. The lawsuit also alleges the officers did not get him medical attention immediately after the shooting.

The California Attorney General's Office has said it is also conducting an independent investigation.

California Attorney General Xavier Becerra in January recommended an overhaul of force-related policies within the department. City officials welcomed the input and said they expect they will put the plan into action. Hie said an officer's response to a suspect's actions should be proportional to the nature of a threat and that he or she "exhaust all reasonably available alternatives before using deadly force."