The nagging problem with the Al Franken case 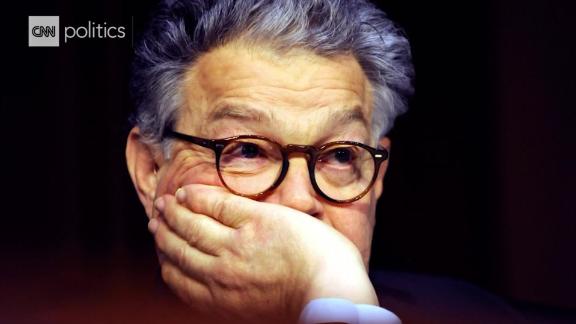 Multiple women have come forward to accuse Sen. Al Franken of inappropriate touching. Two of those incidents occurred while he was on separate USO tours.

More than a year after Franken resigned from the US Senate, his story has been resurrected, this time by the highly-regarded journalist Jane Mayer in the New Yorker. She adeptly uncovers the journalistic failures and apparently less-than-legitimate motivations of Leeann Tweeden, the first woman to accuse Franken of harassment.

Tweeden is the woman who, at the end of a 2006 USO tour in which she and Franken performed, was photographed, apparently sleeping, by the tour photographer, while Franken mimed reaching for her breasts. Tweeden is a right-wing operative, and the story -- and photo -- broke via media outlets that didn't do any real fact-checking or give Franken a right of response.

The aftermath -- seven other women coming forward, Franken staying largely silent, feminists and his Senate colleagues eventually calling for his resignation -- amounted to, Mayer wrote on Twitter, Franken being "railroaded."

One important takeaway from the piece is that we are still figuring out a fair process to handle these #MeToo claims. A great many people agree with Mayer that Franken was unfairly pushed off his perch. But another crucial takeaway is this: Men, ultimately, need to be responsible for what they do.

Eight women in all accused Franken of groping or unwanted kissing. The miming breast-grab of a sleeping woman may pale in comparison to, say, the accusations of rape against the President of the United States. But still, it's no small thing, unless we simply expect physical aggression from men toward women.

Male readers, consider: would you think it was a small thing if your older male boss grabbed your butt and forcibly kissed you? Female readers: Are there circumstances in which you could see yourself grabbing the bottom of a subordinate employee, or forcing a kiss on his lips?

Yes, sometimes women harass and assault men. More often, men harass and assault other men. But overwhelmingly, the kind of stories we write off as no biggie are also the most pervasive ones: men harassing, grabbing and kissing women without their consent. Change up the genders and the utter weirdness of it becomes a bit clearer.

Yet over and over again, we expect women to tolerate men's bad behavior -- or justify it by saying the man is just socially awkward, or desperate, or oblivious. This is one defense of Franken, made in a quote from comedian and Franken defender Sarah Silverman in Mayer's piece: that he is "a social -- not a sexual -- 'lip-kisser.'" Tellingly, everyone who reported being socially kissed on the lips by Franken was female.

It may indeed be that Franken is an awkward guy -- as described by other of his supporters -- whose intentions are pure. His acts, though, were still distressing (I am a big fan of Franken's politics and adored him as a politician; I still would not want to be kissed on the lips by him).

Why should women have to tolerate behavior that is neither standard nor socially acceptable -- that is frankly gross -- in order to accommodate a socially inept man? It's hard to imagine, say, Rep. Alexandria Ocasio-Cortez going through her career kissing her male colleagues on the mouth and having it shrugged off as "oh that's just Al!"

It is true that the #MeToo movement has not yet figured out a sophisticated system of dealing with wrongdoing -- #MeToo, after all, is not itself a legal system nor even an organization, but rather an amorphous catchphrase. The Franken case is one that poses a good counterfactual: wouldn't it have been better to have slowed down and investigated these claims more thoroughly before pushing for Franken's resignation?

Perhaps -- although perhaps it would have been politically damaging for Democrats to have Al Franken on the Senate Judiciary Committee during the Kavanaugh hearings. Certainly we should all consider how a legal concept like due process should play in here. But due process exists in criminal proceedings precisely because the stakes are so high. We must also insist on a fair process when leveraging social and professional, but not criminal, penalties.

What that looks like is less clear. An investigation? Sure. An "innocent until proven guilty beyond a reasonable doubt," with no consequences unless that very high bar is met? Probably not.

This latest attempt to bring Franken back from the dead does at least present the opportunity to debate these crucial issues.

But the reanimating of the Franken story also points to the ways in which we excuse men on the basis of intent while holding women accountable not just for their own actions, but often for the consequences of men's as well. Just look at the blame heaped on Sen. Kirsten Gillibrand for saying Franken should resign. She didn't force him out; he left voluntarily, if -- certainly -- under pressure. And yet she shoulders the burden of his decisions, without the excuse of "undermining due process wasn't her intent."

And it is necessary to shift away from our knee-jerk impulse to excuse badly-behaved men as well-meaning while holding women to standards of perfect decision-making (and even making them responsible for men). That impulse to give men a pass comes from a fundamental assumption that men are deserving: of Senate seats, of unrestrained expressions of sexuality, of power, of personality foibles, even if those foibles make them anti-social and involve violating entirely reasonable and predictable physical boundaries.

This assumption of deserving -- of belonging -- is also what keeps women out of the halls of power, or at least what makes us so conspicuous when we are there. Despite a record number of woman in Congress, we are nowhere near making up half of that supposedly representative body. Is that Al Franken's fault? Of course not. Did he benefit, electorally, personally and professionally -- and is he defended even now -- because of assumptions that he belonged and that his intent mattered more than his actions? Yes.

This is shifting. Male power is being challenged. Sometimes, that happens at the ballot box -- Wendy Davis, who as a state Senator in Texas gained national attention for filibustering a state abortion bill in 2013 and then ran unsuccessfully for governor -- announced her candidacy for Congress this week.

Other times, it happens when women speak out against male misbehavior. It's OK to think that the reaction to the allegations against Al Franken was overkill. Franken is no monster. But he is an imperfect man who made a series of bad choices. Maybe he deserves a second chance. But no one is to blame for his decisions other than him.

Hi: 94° Lo: 56°
Feels Like: 79°
More Weather
Thankfully, the wind is cooperating much better today in northern California. Our weather is still quite hot for this time of year and very dry. There is plenty of haze and smoke from the Fawn Fire overhead, and it isn't leaving yet.

Fawn Fire: Residents of Tierra Oaks and those east of I-5 to Pine Grove allowed home

One man stays behind to help firefighters battling the Fawn fire